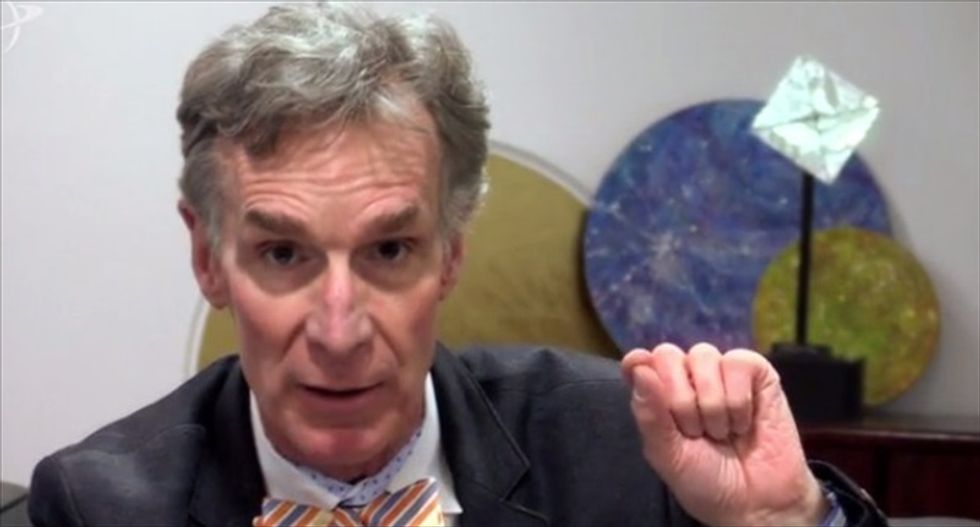 A crowd-funding campaign led by "Science Guy" Bill Nye is apparently on its way to success, paving the way for a 2016 space flight he said would determine the viability of "solar sail" technology.

The Planetary Society's campaign for the "LightSail" project had raised just over $268,000 as of Wednesday night, exceeding its original $200,000 goal with 43 days left in the campaign. Nye, the society's CEO, called LightSail "the culmination of the hopes and dreams of our visionary founders, Louis Friedman, Bruce Murray and Carl Sagan."

Nye appears in the promotional video outlining the project, which would send a small satellite -- referred to as a "CubeSat" -- into space equipped with "sails" composed of 32 square meters of mylar that would harness sunlight as a means of propulsion.

"If sunlight is shining on something, it's actually giving it a tiny, tiny push," he explains. "So if we can get a spacecraft up in space that has enough area and has low enough mass, sunlight gives it a push."

The Daily Dot reported that the group has raised more than $4.2 million to apply toward the project's overall cost of $5.45 million, with the online campaign constituting the "final push." The society said it plans to test LightSail in a "shakedown" flight around Earth next month en route to the 2016 launch.

The campaign video also features astrophysicist Neil deGrasse Tyson, who says "solar sailing" could allow one to travel through longer distances in space in "relatively small amounts of time."

"If I could ride a solar sail, I think I'd take it to Pluto," deGrasse Tyson jokes. "I feel bad about Pluto 'cause I played a role in its demotion. I just wanna hug Pluto."

Watch Nye and deGrasse Tyson explain the concept of "solar sails" in the LightSail campaign video below.