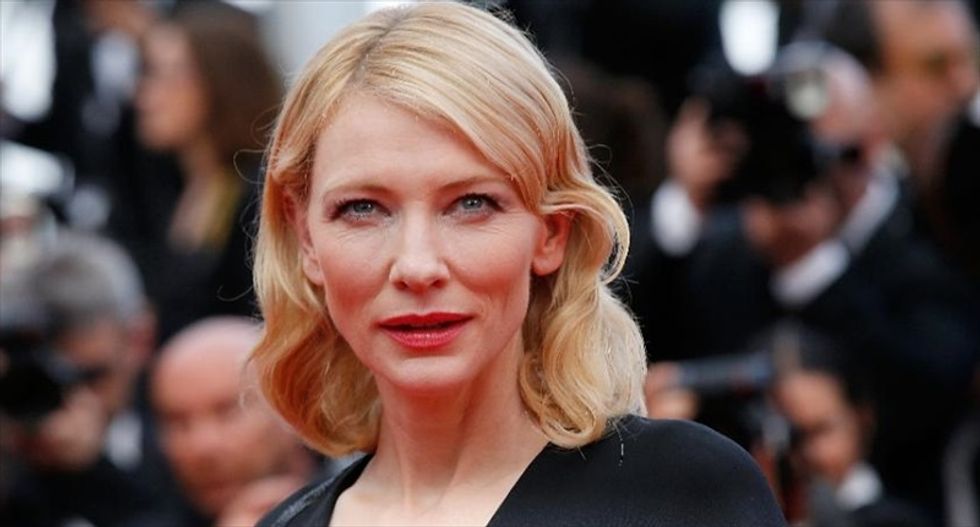 Australian actress Cate Blanchett arrives for the screening of the film 'Sicario', during the 68th Cannes Film Festival in south-eastern France, on May 19, 2015. Photo by Valery Hache for Agence France-Presse.

This year's Cannes Film Festival has been dubbed the "Year of the Women" for its focus on female issues and filmmakers, but many of the women in question seem keen to fight back against the label.

The festival on France's south coast -- like the wider film industry that feeds it -- has a reputation for male domination, so there was some relief that this year's official selection opened things up a bit.

A female director, Emmanuelle Bercot, opened the festival for only the second time in its history and Agnes Varda will be the first female recipient of the honorary lifetime achievement award.

The competition includes two women directors where often there are none, and the most critically lauded entry so far -- Carol starring a lavishly praised Cate Blanchett -- focuses on repressed lesbian love.

Even the action films -- Mad Max: Fury Road and drug war thriller Sicario -- have female leads in the form of Charlize Theron and Emily Blunt.

Despite all this, the women in question have pushed back against the idea they should feel grateful for the supposed largesse.

"They say it's the 'year of the women'", said Blanchett at a press conference. "You hope it's not just a year -- not just some fashionable moment."

Bercot outright rejected the idea that the choice of her film as festival opener was some sort of victory for female empowerment.

"It's the selection of the film that's an honour," she said. "I don't feel I've been a given a gift because such a prestigious slot went to a woman."

To make matters worse, the festival's supposed embracing of females was undermined by claims on Tuesday that women were being turned away from the red carpet for not wearing high heels.

Blunt said the reports were "very disappointing... everyone should wear flats to be honest."

She went on to criticise the obsession of reporters with her "tough" characters.

"I get asked a lot about playing tough female roles, but I don't really see them as tough," said the British actress.

"There are plenty of strong women out there and I don't think they can be compartmentalised as one thing -- oh, you're tough. Why? Because I have a gun?"

Oscar-winner Natalie Portman, who has been all over the seaside Croisette promoting her directorial debut A Tale of Love and Darkness this week, said women-led productions were still being written off as "vanity projects".

"I remember as a kid when Barbra Streisand would make movies that she was in and people would say, 'oh it's vanity, it's a vanity thing'," said Portman, criticising the "completely imbalanced" industry that means women direct only a tiny fraction of Hollywood pictures.

A talk about gender on the sidelines of the festival opened with the statistic that only 4.6 percent of US studio films were directed by women last year, and not one Oscar best picture nominee featured a female protagonist.

Speaking at the talk, Salma Hayek argued real change would come not from token gestures at festivals but from a realisation that women can bring in the bucks.

"The only thing we can do is show them we are an economic force," said the Mexican actress and producer.

"Nothing else will move them. The minute they see money, things will be instantaneously different."

That shift is already happening. In the industry marketplace that runs alongside the festival, sales have been increasingly focused on women viewers this year.

"It used to be all about action-driven things with a male demographic, the Stallone-Schwarzenegger type movie," said Scott Roxborough, a journalist with The Hollywood Reporter.

"Everyone now is trying to get women on board to try to appeal to a female audience and not just grab teenage boys. Teenage boys don't go to movies -- they either watch them on the Internet or play video games," he said.

Blanchett said she was exasperated that this discussion was still happening in 2015.

"I want it to not be discussed anymore," she told Variety. "But it needs to be discussed."