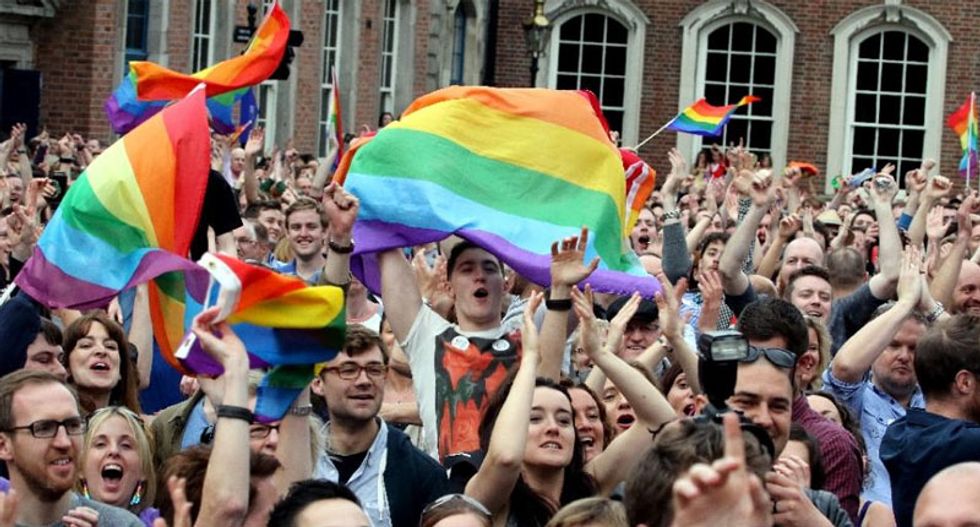 Supporters outside Dublin Castle cheer the result of the same-sex marriage referendum on May 23, 2015 (AFP Photo/Paul Faith)

The once-dominant Catholic Church in Ireland was trying to come to terms Sunday with an overwhelming vote in favour of gay marriage, saying it needed a "new language" to connect to people.

As jubilant "Yes" supporters nursed their hangovers after partying late into the night following Saturday's referendum result, the faithful attended mass to hear their priests reflect on the new social landscape in Ireland.

"The Church has to find a new language which will be understood and heard by people," Archbishop of Dublin Diarmuid Martin, a senior Irish cleric, told reporters after mass at the city's St Mary's Pro-Cathedral.

"We have to see how is it that the Church's teaching on marriage and family is not being received even within its own flock."

The majority of Irish people still identify themselves as Catholic but the Church's influence has waned in recent years amid growing secularisation and after a wave of clerical child sex abuse scandals.

During the campaign, bishops spoke against changing the law, while older and rural voters were thought to have accounted for much of the "No" vote.

Final results showed 62 percent in favour and 38 percent against introducing gay marriage in a country where being homosexual was a crime until 1993.

As Sunday's newspapers marked the result with colourful pictures of partying "Yes" supporters, they noted the heavy blow to Church authority.

Niall O'Connor wrote in the Sunday Independent: "The once unshakeable influence of the Catholic Church over Middle Ireland has been confronted."

Ireland will become the 19th country in the world to legalise same-sex marriages once the necessary legislation is approved as expected. The first weddings could happen within six months.

Tony Flannery, co-founder of the Association of Catholic Priests, was stripped of his ministry in 2012 due to his outspoken liberal views on contraception and the ordination of female priests.

The Redemptorist priest, who voted Yes, said the Church needed to rethink how it approaches Ireland's youth if it is to reverse its waning position in society.

"The last thing the Irish bishops should be doing is further alienating the young generation who the Church, to a fair degree, has lost already," he told AFP.

All of Ireland's 43 constituencies except one voted in favour of the measure and the 60-percent turnout was far higher than in previous referendums, as thousands of expatriates returned to cast their ballots.

It was the first time ever that gay marriage had been approved by popular vote.

The gay marriage landslide has led some politicians to seek a further referendum on the Irish constitution's eighth amendment, which bans pregnancy termination.

Abortion is illegal in Ireland except where the mother's life is in danger.

Deputy Prime Minister Joan Burton told public broadcaster RTE that in the junior coalition party's 2016 general election manifesto, "we will be seeking, on behalf of women, to repeal the eighth amendment."

The Labour leader said Ireland was "now a rainbow nation, and that means a nation of inclusion and diversity".

Friday's referendum asked voters whether or not they approved the statement: "Marriage may be contracted in accordance with law by two persons without distinction as to their sex."

Congratulations poured in to Ireland from around the world, including from British Prime Minister David Cameron and US Vice President Joe Biden.

In Australia, Prime Minister Tony Abbott said Sunday his country would not follow Ireland's lead and hold a referendum on gay marriage, adding that any decisions would be made by parliament.

Gay marriage was explicitly outlawed in Australia under a 2004 revision of the national Marriage Act.

In Germany, Jens Spahn, a member of the executive committee of Chancellor Angela Merkel's Christian Democrats, appeared open to change.

"One should think, what the Catholic Irish can do, we can too," he was quoted by Welt Online as saying, adding: "The population is often more ahead in these matters than we think."

Some citizens voiced mixed feelings as they went about their business in Dublin on Sunday.

"I'm saddened, because I don't think it was a good idea. I think there are much more important things to be looked after in this country," said one woman, Bernadette.

Another, Caroline, told AFP: "While I'm happy with the result, I don't think we should be voting necessarily on something which should be a human right anyway."