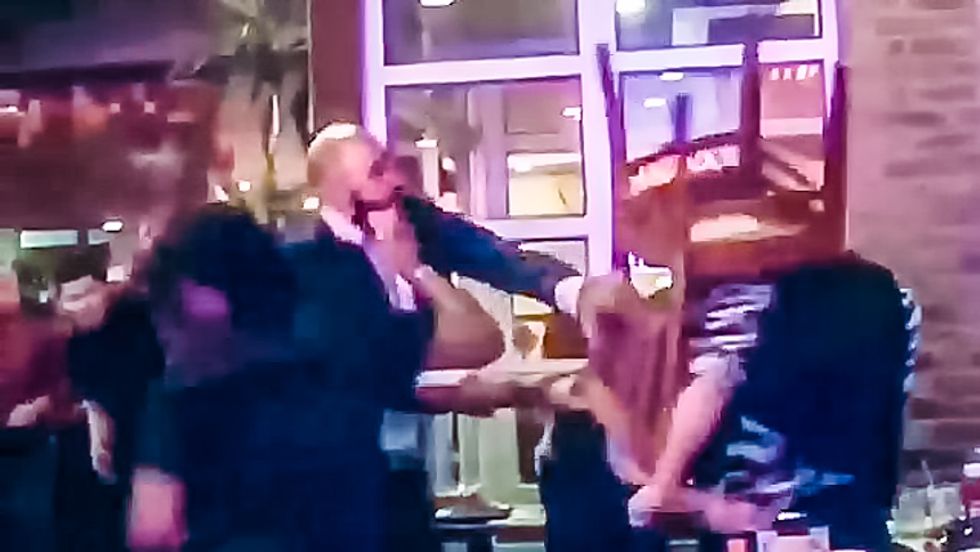 The New York City Police Department (NYPD) is investigating allegations that men at a Dallas BBQ restaurant in Manhattan were called anti-gay slurs and then beaten.

Jonathan Snipes, 32, told DNA Info that he was having dinner at the Chelsea neighborhood restaurant with his 25-year-old boyfriend, Ethan York-Adams, on Tuesday night when the attack occurred.

"A table near us audibly started making pretty gross comments about the two of us like, 'White f----ts, spilling drinks,'" Snipes recalled.

"I don't let anyone talk to me like that," he explained. "I went over there and asked, 'What did you say about us?'"

Snipes said that he weighed 140 pounds, and did not expect the two large men to turn the verbal disagreement into a physical confrontation.

"I may be a mouthy broad, but I wasn't going to take it to that level," he noted, adding that one of the men "turned it into a physical altercation very quickly."

According to DNA Info, the man knocked Snipes off of his feet, and then began kicking him while he was on the ground. During the beating, one of Snipe's teeth was left loose, cartilage in his ear was snapped and his head was bruised.

"At some point, the guy stops kicking me in the face. He's won," Snipes said. "But as [my boyfriend] tried to get me away, that's when the other dude hits him with the chair."

Cell phone video posted to Instagram by "isaamsharef" shows York-Adams helping Snipes back to their table when a large bald man approaches from out of frame. The man swings a heavy wooden chair above his head and quickly brings it down on the heads of York-Adams and Snipes.

York-Adams appears to catch most of the blow, and he falls to the floor. Snipes, who is also hit, slumps into a chair.

"They hit us hard and then they wouldn't stop. I was hobbling away and they came and attacked us again," Snipes said. "We were just trying to get away from it."

By the time that police and medical crews had arrived on the scene, the suspects had fled. No arrests had been made by early Wednesday afternoon.

Watch the video below, uploaded by @isaamsharef.

Watch !!!! Child, next to my table a fight in bbqs, and a man cracks a chair over someone's head and then runs out smh, as I waited on my chicken and shrimp combo and frozen apple tini #cincodemayo