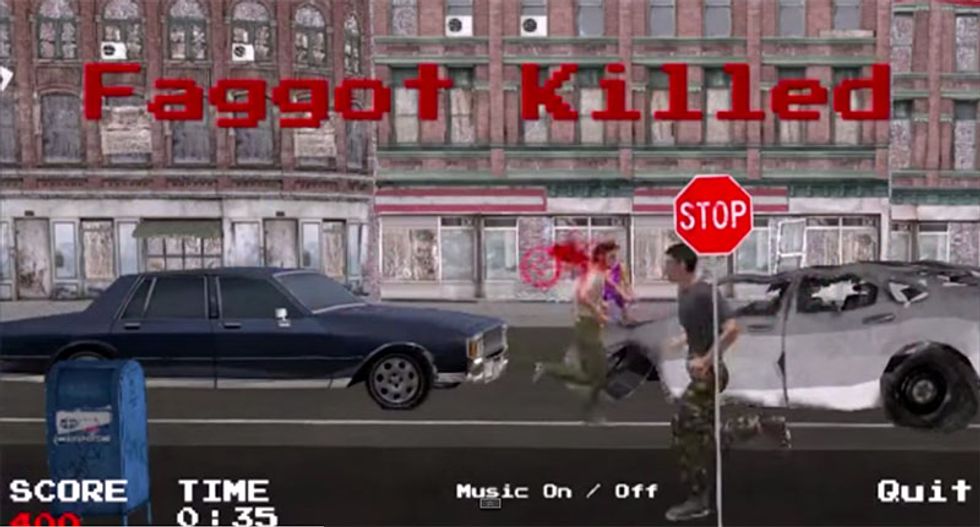 The game, offensively titled "Kill the F*ggot," was created by Randall Herman of Skaldic Games and submitted on Monday morning to Steam’s Greenlight program, and was removed a few hours later after complaints were made by users.

Steam's Greenlight program allows game developers to showcase their games for a fee and let the Steam user community vote for the games to be made commercially available through Steam. However, Steam does not vet the games submitted to Greenlight.

"Kill the F*ggot" is a shooting gallery type of game. The player's goal is to "Murder gays and transgenders [sic] while avoiding killing straight people. Get points before time runs out."

It is clear that the game aims to appeal to homophobic and transphobic gamers. The description of the game read "Hate gays? Want to unleash your frustration with the 'LGBT' community? Well now is your chance," according to Gay Star News.

Games critic Jim Sterling tested the game and posted a YouTube video of the testing before it was removed by Steam.

The video shows that the game is extremely violent and blatantly offensive. The player kills people dressed in bright-color clothes who say things like "Can I put my wiener in your butt?" and "Whoops, I just dropped the soap." When a gay man is killed, a voice will say such things as "f*ggot die" and "AIDS carrier eliminated."

"It's disgusting," Sterling is heard while playing the game, and he had to stop just a few minutes in.

Sterling said later in the video that he decided to test the game to demonstrate that perhaps "having absolutely zero vetting process on Steam isn't the best idea."

The man behind the game, Randall Herman, is a California developer, according to Ars Technica.

Herman is also a skateboarder and Christian shoe promoter. He launched a Kickstarter campaign in 2014 on behalf of a skateboarding shoe company "with one goal in mind: to promote the words and teachings of Jesus Christ through quality footwear," according to Ars Technica.

Herman is claiming that the game was meant to challenge the overly political correctness in the gaming industry by making "most overly offensive game possible to these idiots to prove a point," and was not intended to incite hatred or violence towards LGBT people.

"To everyone that got overly offended. Good, that's what we were going for. Just wait for our next game we are working on, its gonna be way more offensive as this one [sic]," Skaldic Games said in a statement after the game was removed by Steam. The company does not intend to offer an apology.

After the game was removed from Steam, a statement was posted on Skaldic Games' site with a link to a free version of the game and an explanation about its creation, according to Ars Technica. The game has been removed from the website since then.

Watch Jim Sterling's review of "Kill the F*ggot" on YouTube.