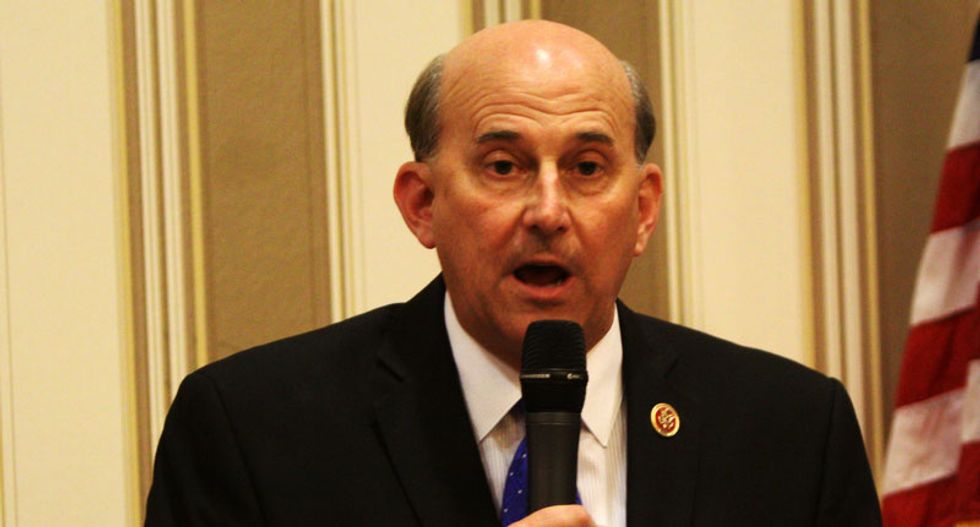 US Congress periodically holds hearings on issues related to climate change. Because the subject has become a partisan one in America, they generally follow a predictable pattern – Democrats invite science and policy expert witnesses who agree with the expert consensus on human-caused global warming and the need to address it, and Republicans invite witnesses who disagree .

John Christy at the University of Alabama at Huntsville is one of the fewer than 3% of climate scientists who publishes research suggesting that humans aren’t the primary cause of the current global warming. He’s thus become one of Republicans’ favorite expert witnesses .

Last week, the Committee on Natural Resources held a hearing to discuss draft guidance by the the President’s Council on Environmental Quality to include carbon pollution and the effects of climate change in the consideration of environmental impacts of federal projects, as part of the National Environmental Policy Act (NEPA) review process . Needless to say, the Republicans on the committee don’t like the idea, as is clear from the hearing highlights and lowlights in the video below.

Given that the hearing was ostensibly about environmental policy, most of the witnesses were policy experts. John Christy was the lone climate scientist invited to testify. His testimony focused on manufacturing doubt about the accuracy of climate models, climate change impacts, and about individual American projects’ contributions to global warming. On the accuracy of climate models, Christy played rather fast and loose with the facts, saying in his written testimony (emphasis added),

Do we understand how greenhouse gases affect the climate, i.e. the link between emissions and climate effects? A very basic metric for climate studies is the temperature of the bulk atmospheric layer known as the troposphere, roughly from the surface to 50,000 ft altitude. This is the layer that, according to models, should warm significantly as CO2 increases ...

I was able to access 102 CMIP-5 rcp4.5 (representative concentration pathways) climate model simulations of the atmospheric temperatures for the tropospheric layer and generate bulk temperatures from the models for an apples-to-apples comparison with the observations from satellites and balloons ... On average the models warm the global atmosphere at a rate three times that of the real world ... As such, they would be of highly questionable value in determining policy that should depend on a very confident understanding of how the climate system works.

Christy’s oral testimony referred only to the temperatures of the “atmosphere” and “planet.” As shown in the above quote, in his written testimony , Christy twice referenced the troposphere – the lowest layer of the atmosphere from the surface to 50,000 feet (15km) in altitude. However, to argue that climate models have been inaccurate, Christy showed a graph of only mid-troposphere temperatures. The mid-troposphere is the atmospheric layer from about 25,000–50,000 feet, or about 8–15km in altitude.

One might reasonably ask why Christy only showed data for such high altitudes. For perspective, the highest point on the Earth’s surface is on Mount Everest at 29,000 feet (8.8km), and the highest elevation city in the world is La Rinconada, Peru at 16,700 feet (5.1km). Humans live in the lower troposphere, not the mid-troposphere.

As weather balloon data show, the mid-troposphere is warming significantly more slowly than the lower troposphere, where the increasing greenhouse effect has more of an impact on temperature changes. It’s possible that climate models aren’t quite getting the vertical profile of atmospheric temperature changes quite right. It’s also possible that the measurements themselves aren’t accurate – different scientific groups have significantly different estimates of the rates of warming in the low and mid-troposphere. Some combination of both is undoubtedly true.

However, climate models have done a good job matching the observed temperature change at the surface and in the lower troposphere , where humans live. We understand the workings of the Earth’s climate much better than Christy suggests, especially where it matters most to humans. This isa key focus of my book and one of my Denial101x course lectures.

For further detail on how climate models are built, see this Denial101x interview with expert climate modelers . Toward the end of the video, Professor Andrew Pitman provides this quote that John Christy and Republicans in Congress would do well to learn from.

Christy also suggested that Americans have not yet experienced increases in various extreme climate impacts such as heat waves. This is a particularly strange example, given that Christy doesn’t deny that temperatures have risen significantly, and an increase in heat waves is an obvious consequence of rising temperatures. There is indeed a large body of scientific literature showing that heatwaves and other types of extreme weather are becoming more frequent and intense due to human-caused global warming.

Christy also claimed that carbon emissions from any single federal project will have a negligible impact on climate change; an extremely flawed argument. If I dump a bucket of motor oil into a nearby river, it will have a negligible environmental impact. Should we then allow everyone to dump their used oil into rivers without regulation? It’s cumulative national and global carbon emissions that matter, and every source of emissions should be appropriately considered.

This is of course incorrect – the scientific evidence was on Galileo’s side, although it’s correct to note that the climate science evidence is overwhelmingly against Christy . Christy himself has tried to have it both ways on consensus, previously having claimed to be part of the 97% ( he’s not ), and in the hearing claiming in response to a question about a NASA statement on the on the consensus ,

I would hope I could disabuse you of that 97% number. That’s been debunked by several studies ... remember, the NASA website is controlled by a specific government.

This claim is false . Two poor responses to our 97% consensus paper were published in off-topic journals and were themselves debunked . This was also an ironic choice of words by Christy. As documented in The Hockey Stick and the Climate Wars , Christy previously wrote a letter of complaint to the president of Michael Mann’s university after Mann correctly noted in Senate testimony that the myth that Christy’s satellite data contradicted surface temperature data had been debunked.

My colleagues and I have thick skins and won’t be writing to the president of Christy’s university, but he’s once again confused about just what has been debunked.

Why it all Matters

Rep John Fleming (R-VA) and Christy discussed that mass extinctions and mega-droughts have occurred naturally in the past – the ‘climate has changed before’ logical fallacy . To take comfort in the fact that climate change has led to mass extinctions and mega-droughts, while we’re in the midst of a rapid human-caused climate change, is utterly misguided. These are the sorts of dangerous consequences we’re trying to avoid triggering.

There’s recently been a debate about whether we can still keep global warming below the 2°C “danger limit.” Most agree that we have all the technology we need to do it relatively cheaply , and we still have time , but what’s lacking is the political will. When Congressional climate hearings focus on science denial and manufacturing doubt in order to delay needed policies, that’s exactly the sort of political failing that may prevent us from solving this problem.

It’s important to remember that most Republicans accept the reality of human-caused global warming and support taking action to solve the problem ( especially if the solution is revenue neutral ) – just none of the Republicans in Congress, yet. Congressman Jared Huffman (D-CA) summarized the problem nicely,

Multiple studies published in peer-reviewed scientific journals agree [on human-caused global warming]. That’s a very different proposition than what we heard today, that human emissions of greenhouse gases are contributing to climate change and global warming, so I want to congratulate the majority [Republicans] for finding a scientist with this unique contrarian view. I suppose if we look hard enough we could find a cardiologist who would tell us that chocolate cake is good for us. But when there’s such an overwhelming scientific consensus, you know, just a thought that we might want to hear scientific testimony that reflects that.

The bodies of the mostly-Black victims of the white nationalism-inspired mass shooting in Buffalo weren't even cold on Saturday before the folks at Fox News identified the real victims here: White conservatives. As I predicted they would on Sunday, the whining from right-wing media has since reached ear-piercing levels of shrill in response to mainstream media correctly pointing out that Republicans and their media have been hyping the "great replacement" conspiracy theory that shooter Payton Gendron used to justify the killing of 10 people.

But this isn't just an attempt to evade accountability.