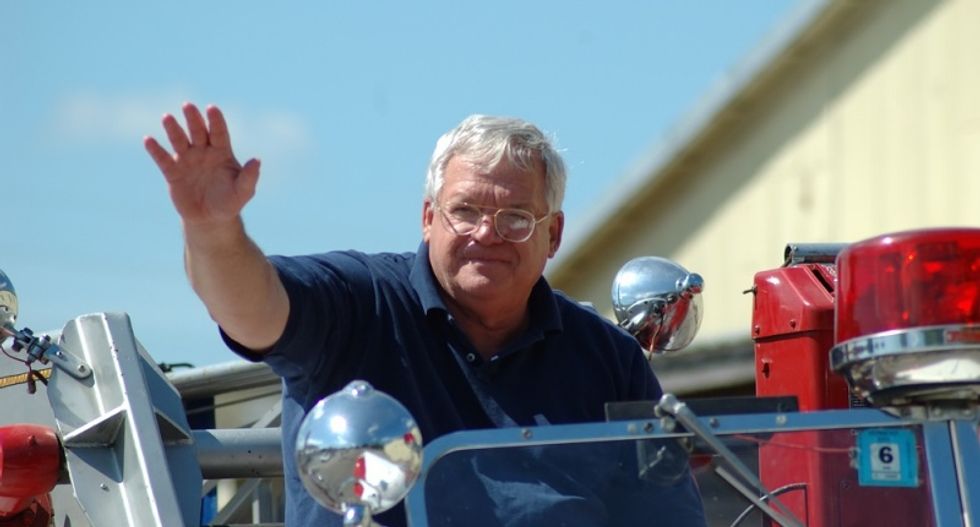 Though he paid millions to keep a man quiet about the nature of their relationship, former House speaker Dennis Hastert (R-IL) was a reliable opponent of gay civil rights during his tenure in Congress.

On Thursday, a federal grand jury indicted Hastert, alleging that he agreed to pay a man $3.5 million over several years in exchange for the latter's silence about his prior relationship with the lawmaker, the Associated Press reports. According to the indictment, Hastert gave $1.7 million to the man between 2010 and 2014, who Hastert knew from his past career as a high school teacher and wrestling coach, as compensation for Hastert's "past misconduct," and for said misconduct's concealment.

Although the indictment provides little information about the nature of that misconduct, the Los Angeles Times, citing law enforcement sources, reports that Hastert was paying to cover up sexual indiscretions with a a person of the same gender he knew from coaching youth wrestling.

"I felt a special bond with our wrestlers," Hastert wrote in his 2004 memoir. "And I think they felt one with me."

Hastert would be only the latest conservative Christian political figure to be revealed as engaging in a homosexual lifestyle he demonized as a lawmaker. His record fighting against gay rights is lengthy and rich.

As a federal legislator, Hastert voted regularly against bills to empower gay people. In Congress from 1997 to 2007, Hastert voted for the so-called "Marriage Protection Act," and in favor of a constitutional amendment to "establish that marriage shall consist of one man and one woman." The year he stepped down, Hastert voted no on the "Employment Non-Discrimination Act," a bill to prohibit companies from discriminating against employees "on the basis of sexual orientation."

Noting Hastert's "deeply conservative" policy positions back in 1998, the Associated Press reported the "National Right to Life Committee, the Christian Coalition, the Chamber of Commerce, and the National Rifle Association all gave his voting record perfect scores of 100."

Hastert resigned as speaker of the House following allegations that he failed to report former Representative Mark Foley (R-FL) for inappropriate relationships with boys employed as pages at the U.S. Capitol.

At a Christian Coalition meeting in 2004, Hastert told the audience that Republicans would push for a constitutional amendment to define marriage as solely between one man and one woman. He said the amendment would send a “strong message to liberal activist judges.”

“We will not allow them to put our children’s future at risk because of their agenda for political correctness,” Hastert added. He also said House Republicans had added language to a budget bill that would increase funding for abstinence sex education. “More kids need to be taught to just say no, that doesn’t just apply to drugs, it also applies to sex before marriage,” Hastert remarked.

In his autobiography, more than a decade old now, Hastert wrote, "I was never a very good liar. Maybe I wasn’t smart enough. I could never get away with it, so I made up my mind as a kid to tell the truth and pay the consequences."