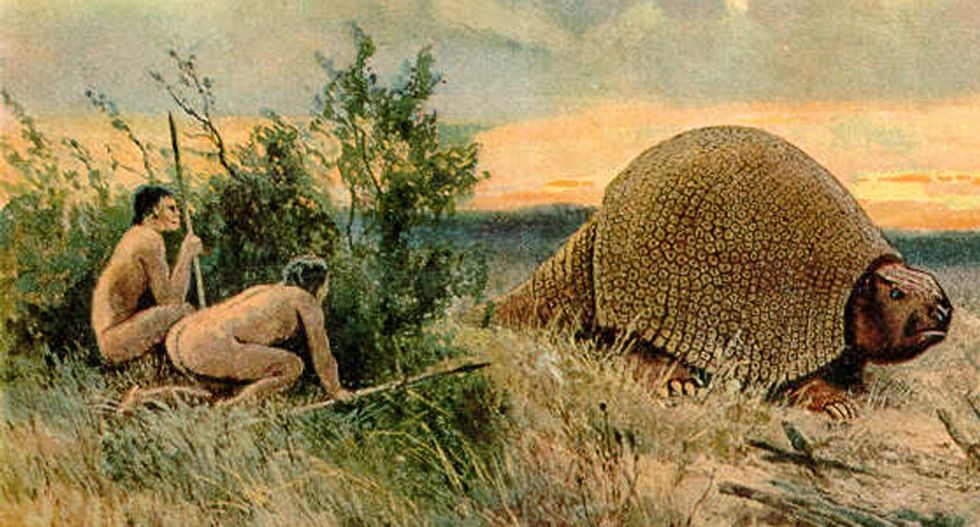 Study shows that modern hunter-gatherer tribes operate on egalitarian basis, suggesting that inequality was an aberration that came with the advent of agriculture

A study has shown that in contemporary hunter-gatherer tribes, men and women tend to have equal influence on where their groups lives and who they live with. The findings challenge the idea that sexual equality is a recent invention, suggesting that it has been the norm for humans for most of our evolutionary history.

Mark Dyble, an anthropologist who led the study at University College London, said: “There is still this wider perception that hunter-gatherers are more macho or male-dominated. We’d argue it was only with the emergence of agriculture, when people could start to accumulate resources, that inequality emerged.”

Dyble says the latest findings suggest that equality between the sexes may have been a survival advantage and played an important role in shaping human society and evolution. “Sexual equality is one of a important suite of changes to social organisation, including things like pair-bonding, our big, social brains, and language, that distinguishes humans,” he said. “It’s an important one that hasn’t really been highlighted before.”

Related: How hunting with wolves helped humans outsmart the Neanderthals

The study, published in the journal Science , set out to investigate the apparent paradox that while people in hunter-gatherer societies show strong preferences for living with family members, in practice the groups they live in tend to comprise few closely related individuals.

The scientists collected genealogical data from two hunter-gatherer populations, one in the Congo and one in the Philippines, including kinship relations, movement between camps and residence patterns, through hundreds of interviews. In both cases, people tend to live in groups of around 20, moving roughly every 10 days and subsisting on hunted game, fish and gathered fruit, vegetables and honey.

The scientists constructed a computer model to simulate the process of camp assortment, based on the assumption that people would chose to populate an empty camp with their close kin: siblings, parents and children.

When only one sex had influence over the process, as is typically the case in male-dominated pastoral or horticultural societies, tight hubs of related individuals emerged. However, the average number of related individuals is predicted to be much lower when men and women have an equal influence – closely matching what was seen in the populations that were studied.

“When only men have influence over who they are living with, the core of any community is a dense network of closely related men with the spouses on the periphery,” said Dyble. “If men and women decide, you don’t get groups of four or five brothers living together.”

Sexual equality is one of a important suite of changes to social organisation, including things like pair-bonding, our big, social brains, and language, that distinguishes humans. It’s an important one that hasn’t really been highlighted before

The authors argue that sexual equality may have proved an evolutionary advantage for early human societies, as it would have fostered wider-ranging social networks and closer cooperation between unrelated individuals. “It gives you a far more expansive social network with a wider choice of mates, so inbreeding would be less of an issue,” said Dyble. “And you come into contact with more people and you can share innovations, which is something that humans do par excellence.”

Dr Tamas David-Barratt, a behavioural scientist at the University of Oxford, agreed: “This is a very neat result,” he said. “If you’re able to track your kin further away, you’d be able to have a much broader network. All you’d need to do is get together every now and then for some kind of feast.”

The study suggests that it was only with the dawn of agriculture, when people were able to accumulate resources for the first time, that an imbalance emerged. “Men can start to have several wives and they can have more children than women,” said Dyble. “It pays more for men to start accumulating resources and becomes favourable to form alliances with male kin.”

Dyble said that egalitarianism may even have been one of the important factors that distinguished our ancestors from our primate cousins. “Chimpanzees live in quite aggressive, male-dominated societies with clear hierarchies,” he said. “As a result, they just don’t see enough adults in their lifetime for technologies to be sustained.”

The findings appear to be supported by qualitative observations of the hunter-gatherer groups in the study. In the Philippines population, women are involved in hunting and honey collecting and while there is still a division of labour, overall men and women contribute a similar number of calories to the camp. In both groups, monogamy is the norm and men are active in childcare.

Andrea Migliano, of University College London and the paper’s senior author, said: “Sex equality suggests a scenario where unique human traits, such as cooperation with unrelated individuals, could have emerged in our evolutionary past.”

WATCH: Ron Johnson attempts to flee through locked door as he avoids question on school shooting