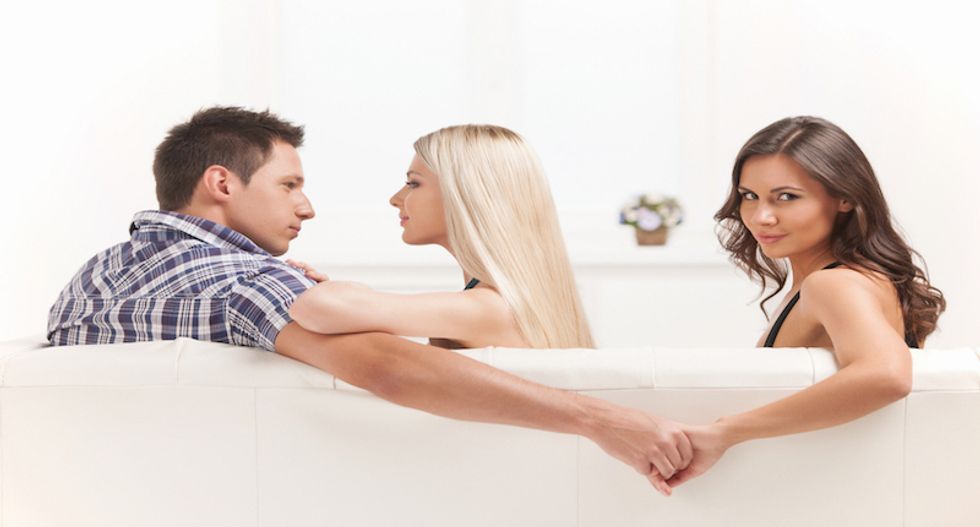 "Monogamy used to be one person for life. Now monogamy is one person at a time."

That harsh observation of modern-day relationships was explained by therapist Esther Perel in her latest Ted talk. Theories on monogamy and infidelity have been expressed by many who study societal patterns and phenomenons, but Perel delved into a conundrum that many have been trying to solve for quite some time:

Why is it that people in perfectly happy relationships stray? What causes individuals to compromise something that's working for what seems to be nothing more than a cheap thrill?

We've all either observed or experienced the deception that comes along with infidelity, and the consequent knee-jerk reaction is to simplify the wrongdoing. Those who have been cheated on tend to blame themselves for their shortcomings, and the cheater is demonized as someone who just fears true intimacy and commitment. Women are thought to cheat because they're genuinely unhappy in a relationship and men do it because they just want to fool around with a new piece of ass.

However, Perel explains that there is complex psychology at play.

The first order of business is defining what infidelity is before unraveling its prevalence. The advancement of technology has led to varying interpretations of what constitutes as cheating. For some (like me), it could be something as simple as flirty text messages with a former classmate or colleague. For others, things would have to get physical before anyone gets tagged with the cheater label.

Regardless of what your definition is, cheating seems to be pretty damn common. A 2008 study from the University of Montreal estimates that anywhere between 40 to 79 percent of people are unfaithful. So why is this happening?

Perel explains that those in happy relationships sometimes find themselves cheating after a tragedy or hardship, like a death in the family.

"Death and mortality often live in the shadow of an affair, because they raise the questions: Is this it? Is there more? Am I going on another 25 years like this? Will I ever feel that thing again?" she said. "Perhaps these questions have propelled people to cross the line and some affairs are an attempt to beat back deadness and an anecdote to death."

It's incredible to see an expert like Perel finally touch on something that has been under-explored by those who try to explain infidelity. There is no one-size-fits-all reason for anything in life, especially a complicated issue like cheating.

The fear of feeling dead before dying is real for a lot of people. The desire for excitement, newness, love, affection, and butterflies can lead anyone to take something as rare as a healthy relationship for granted. We live in a society where we constantly want more than what we already have because we're told there there could be better out there.

Sometimes people cheat because they genuinely are in an unhappy relationship. Other times people stray because monogamy is more of a societal expectation rather than something that's driven by nature. But for some, it can be because they felt that they lost part of who they are when they entered a union with another person. The important thing to take away from something as heartbreaking as infidelity is that the psychology behind it is usually complex.