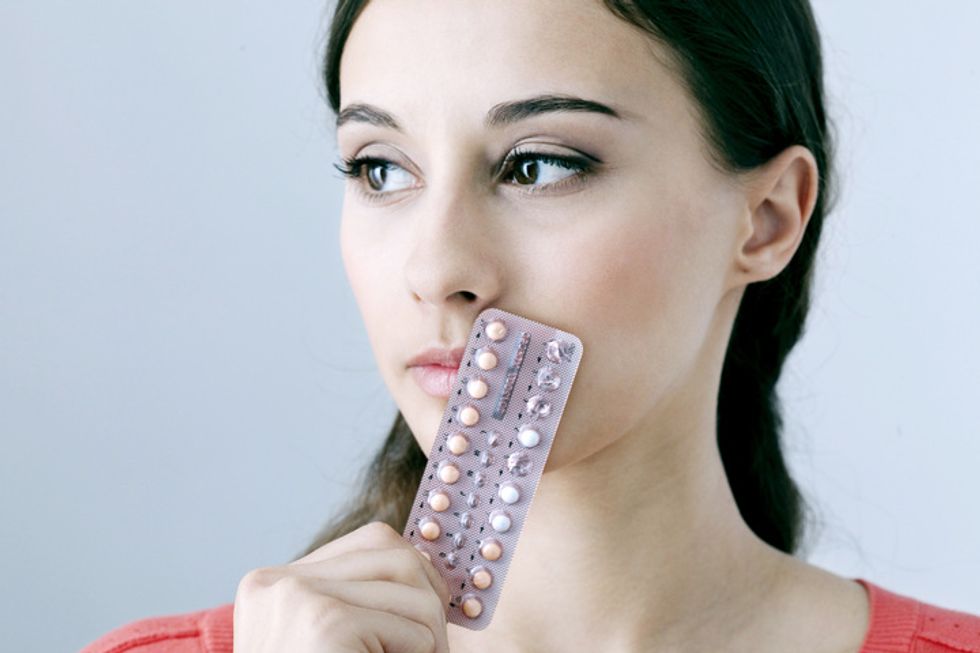 Late Thursday night, the House of Representatives voted in favor of "H.J.Res. 43: Disapproving the action of the District of Columbia Council in approving the Reproductive Health Non-Discrimination Amendment Act of 2014." If enacted, the legislation would make using employer-based health insurance for in vitro fertilization or birth control pills a fireable offense in Washington, D.C.

Planned Parenthood has been mobilizing its network against the bill. "Your boss shouldn’t be able to fire you for using birth control," the organization states.

Thursday's House floor debate kicked off after 9:00 PM. Before I entered the doors to the House Gallery, I complied with a police request to forfeit all my electronic devices. I inquired if I could get a press pass so I could take pictures. After a few radio calls, officials on the scene told me I could not have a press pass. So I relinquished my phone and proceeded to go in the Gallery anyway.

Before going through my second metal detector since entering the building, a police officer gave my purse a thorough examination. I had already put my purse through an x-ray machine.

When I entered the Gallery, Delegate Eleanor Holmes Norton (D-DC) was imploring her Republican colleagues not to use the federal authority vested in them by people from other states to overturn local laws in Washington, D.C.

I sat down near D.C. voting rights activists who were attending the hearing and began to take notes on a steno pad. A congressional staffer came over and informed me I was not allowed to take notes.

I witnessed testimony from Representative Tammy Duckworth (D-IL), a combat veteran whose radiation exposure made it difficult to conceive a child. The Congresswoman recently gave birth; she believes in vitro fertility treatments made conception possible for her. H.J.Res. 43, if enacted, would mean a boss who disagrees with in vitro fertilization could fire an employee for getting pregnant that way.

I left the hearing a little after 10:00 PM to find a place with CSPAN so I could actually take notes. By the time I got home, the House had voted in favor of H.J.Res. 43.

With support from 225 Republicans and 3 Democrats, the U.S. Congress moved to overturn a democratically enacted law in the District of Columbia for the first time in more than 20 years.

While members of Congress voted last night, Norton could only sit in the chamber and watch. Tweets Roll Call journalist Bridget Bowman:

DC's delegate Eleanor Holmes Norton sits in the chamber as other members vote to block DC law. Norton doesn't have a vote on the House floor
— Bridget Bowman (@Bridget Bowman) 1430448324.0

H.J.Res. 43 now goes to the Senate for consideration.

Though its population is greater than that of either Vermont or Wyoming, Washington, D.C. (whose population is about 50 percent black) has limited presidential voting rights, no vote in Congress, and the inability to raise local revenues or pass local laws without Congressional permission.

For over a decade, for example, the U.S. Congress made it a federal crime for the D.C. government to spend locally-raised tax dollars for HIV prevention programming. Today, the District has one of the highest HIV rates in the nation.

In July, for example, Senator Rand Paul (R-KY) inserted an amendment into the Bipartisan Sportsmen’s Act would have mostly nullified gun control policies in D.C. (with carve outs for federal buildings, like the Capitol). If Paul had has his way, the U.S. Government would have had the following impacts on D.C. local laws: "repeal registration requirement, end the ban on semi-automatic rifles and high-capacity magazines, expand the right to carry guns outside the home and protect the right to carry guns on federal land in D.C. and elsewhere in the country. In essence, the bill would eliminate the District’s local gun laws, leaving only federal firearms law to regulate gun ownership and use in the city."

The federal government first permitted the District of Columbia to vote for its own mayor and city council in 1973.