Jon Stewart pays tribute to David Letterman: His show was 'an incredible epiphany' for my generation 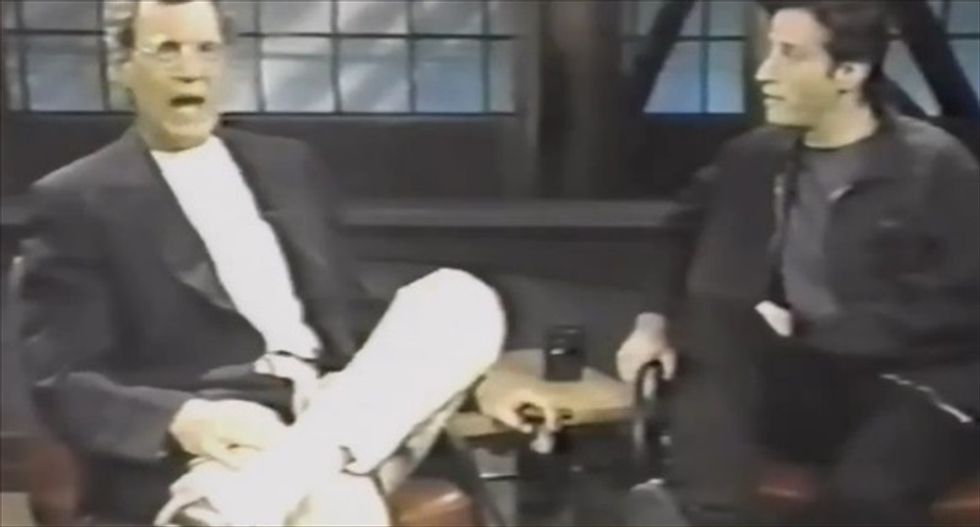 Daily Show host Jon Stewart closed his show on Thursday by offering a heartfelt salute to David Letterman, who will host the Late Show for the final time next Wednesday.

"He was for me -- and I think many comics of my generation -- an incredible epiphany of how a talk show or how entertainment or how television [could be]," Stewart gushed. "For God's sakes, he put a camera on a monkey. It seems so simple now, but back then it was mind-blowing."

Stewart's admiration for Letterman, he said, dated back to the early 1980s, when Letterman was in the midst of his genre-defining run on NBC's Late Night With David Letterman. At the time, Stewart said he "fell in love" with the joy Letterman brought to the program.

Besides having him on his show, Stewart recalled, Letterman did him the honor of appearing on the final episode of his short-lived MTV program, The Jon Stewart Show. Stewart was reportedly not aware his show had been cancelled until just before the final episode was set to be taped.

"He single-handedly turned what was a funereal atmosphere into a celebration," Stewart recalled on Thursday. "Just by his presence, he lifted all of our spirits and he said to me -- I'll never forget -- 'Do not confuse cancellation with failure.' And I thank him for all the amazing years of television and for that wonderful piece of advice."

With that, Stewart told Letterman, "Cheers to ya. Godspeed, young man," before introducing the night's "Moment of Zen" -- a clip from that June 1995 interview in which Letterman addresses the fallout from his heavily-criticized turn as host of the Academy Awards three months earlier.

Watch Stewart's retrospective, as posted online on Thursday, below.

Also, you can watch the entire final episode of The Jon Stewart Show online here.