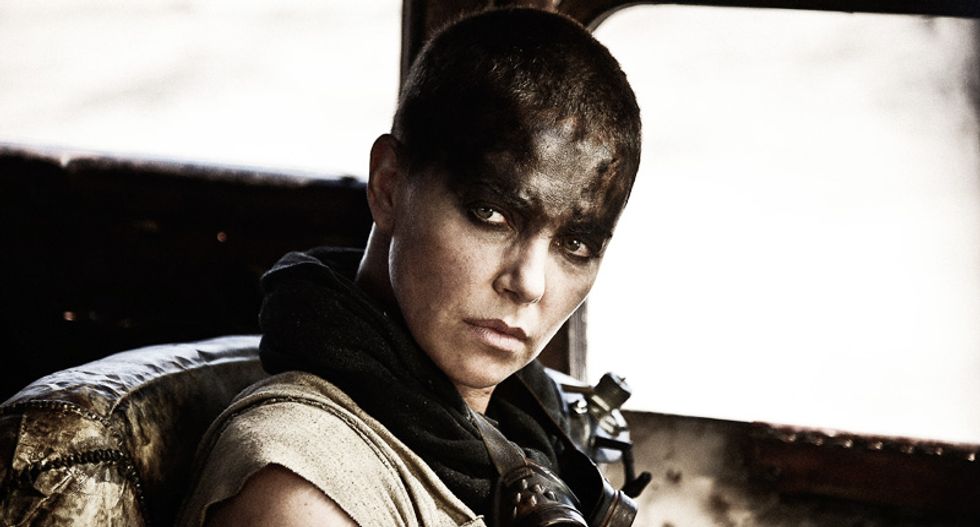 This weekend, thirty-six years after Mad Max rose from the scorched Australian outback to save humanity like a grease-monkey cop-Jesus, the film franchise is launching again and fanboys and fangirls will be lining up to see a lot of explosions and the kind of remarkably elaborate and detailed costume accessorizing one should totally expect to find in the post-apocalyptic future.

This should be cause for joy for all action film fans, but there is no joy in Guyville because the men's rights crowd is once again being victimized by feminists who are -- in a role reversal --using Mad Max: Fury Road  to shove their lady-parts down their manly gullets.

As MRA-anthropologist David Futrelle notes, the MRA's are in full stamping their little feet mode because Fury Road director George Miller failed to make the latest Max edition the testosterone-soaked sausage-fest real men need to get their fists pumping in the air, and their blood pumping down there.

Here is Aaron Clarey writing at Return of Kings (yes, these guys have a fairly high opinion of themselves and their place in the food chain) and having a betrayal sad over a movie he has yet to see:

If you were like me, the explosions, fire tornadoes, even the symphonic score surrounding “Fury Road’s” first trailer made your attendance a foregone conclusion. It looked like a straight-up guy flick. No fucking around.  Perhaps even a little, hidden acknowledgement from the director that when the shit hits the fan, it will be men like Mad Max who will be in charge.

But then the film got cooties, as Time Magazine points out:

Here’s a surprise: Tom Hardy, a.k.a. Mad Max, isn’t the star of Mad Max: Fury Road. Charlize Theron is. An even bigger surprise? Vagina Monologues author Eve Ensler consulted on what turns out to be a very feminist film.

Alas, I was forced to accept reality. Fury Road was not going to be a movie made for men. It was going to be a feminist piece of propaganda posing as a guy flick.

It’s whether men in America and around the world are going to be duped by explosions, fire tornadoes, and desert raiders into seeing what is guaranteed to be nothing more than feminist propaganda, while at the same time being insulted AND tricked into viewing a piece of American culture ruined and rewritten right in front of their very eyes.

For the moment let's skip over the fact that the Mad Max franchise isn't really an artifact of "American culture," and let's move on to the fact that Aaron and the MRA's feel that they are --once again -- having their precious bodily fluids drained by feminist succubi intent upon world domination.  And how are they doing that? By using their feminine wiles to insinuate themselves into the male space where men use their  "physique, strength, and logic," to rule the roost where everyone knows:  chicks -- can't live with them, can't get them to stop tricking men by using their boobs and lady stuff. Dammit.

But let us be clear. This is the vehicle by which they are guaranteed to force a lecture on feminism down your throat. This is the Trojan Horse feminists and Hollywood leftists will use to (vainly) insist on the trope women are equal to men in all things, including physique, strength, and logic. And this is the subterfuge they will use to blur the lines between masculinity and femininity, further ruining women for men, and men for women.

Clarey is calling for a boycott (mancott?) of the film lest Hollywood get some wacky idea that studio audiences are willing to accept a strong female lead in an action film -- and shut up about Ripley in the Alien films, just shut up. So you can expect lots of empty seats at Fury Road viewings this weekend -- three seats for every pair of bros who take a manly and stoic pass, when you include the empty seat they leave between themselves because sitting next to each other at the movies is, y'know...

Hopefully Hollywood will get the message that it is wrong to attempt to lure impressionable young  men into seeing films with strong feminist messages by tricking them with "explosions, fire tornadoes, and desert raiders." Which isn't to say that there is anything wrong with having women in supporting roles as eye candy or in need of saving by men using their "physiques, strength, and logic."

Because, really, this is actually about ethics in action filmmaking.