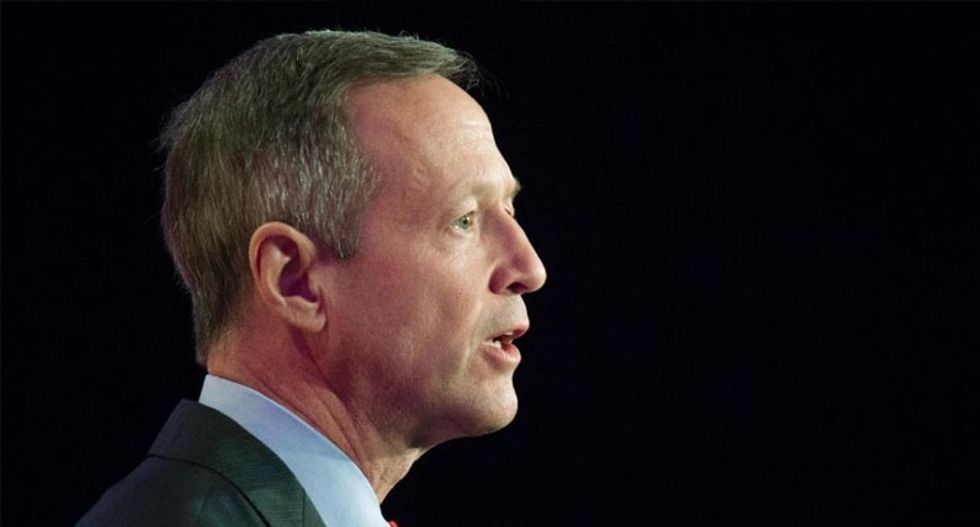 "Powerful, wealthy special interests here at home have used our government to create, in our own country, an economy that is leaving a majority of our people behind," said O'Malley, opening his 2016 presidential campaign with a rally at a waterfront park in downtown Baltimore.

O'Malley, who has aggressively courted his party's liberal wing, began his political career in Baltimore, first as a member of city council and then as mayor.

Decrying big banks as having been behind the financial crisis of 2008, O'Malley singled out Goldman Sachs for particular criticism. He said Goldman Sachs CEO Lloyd Blankfein recently told his employees that "he'd be just fine" with either Republican Jeb Bush or Hillary Clinton as president after the November 2016 election.

"Well, I've got news for the bullies of Wall Street," O'Malley said. "The presidency is not a crown to be passed back and forth by you between two royal families."

Hillary Clinton is the wife of former President Bill Clinton while Jeb Bush, who has not yet formally announced his candidacy but is already considered a leading contender among Republican hopefuls, is son and brother of former Presidents George H.W. Bush and George W. Bush.

Signs at O'Malley's rally promised he would provide "new leadership," but in fact he faces an uphill battle against former secretary of state Clinton, who consistently tops opinion polls to be the party's nominee, and who enjoys national name recognition.

Beth Whitmer, a 62-year-old Baltimore resident who called herself a social liberal, said she felt she knows Clinton's stances better than O'Malley's.

"I would've liked it to have been a little fuller," she said of the speech.

O'Malley now goes on to campaign in Iowa and New Hampshire, the states holding the earliest party nominating contests.

O'Malley, 52, joins a short list of candidates for the Democratic nomination. Alongside Clinton, 67, only Vermont's independent Senator Bernie Sanders has entered the race, and he is viewed as having a marginal shot at success.

So far, eight Republicans are officially competing for their party's nomination, with more likely candidates waiting in the wings.

O'Malley launched his campaign at an uneasy time for Baltimore, which was rocked by riots last month over the death of Freddie Gray, a young black man, from injuries sustained while in police custody. Many residents have said the former mayor's "zero tolerance" crime policies led to increased police brutality.

"Conditions of extreme and growing poverty, create conditions for extreme violence," he said.

Progressive Change Campaign Committee, a group trying to push Democratic candidates to the left, praised his speech, saying he was so far "the only candidate to be outspoken about accountability for Wall Street bankers who committed crimes and crashed our economy."

O'Malley honed his liberal credentials over two four-year terms as governor of a state with a long history of voting for Democratic presidential nominees.

Immediately after his announcement, O'Malley was accused of being an "anti-freedom politician" by former Alaska Gov. Sarah Palin, who lost the 2008 election as the Republican vice president nominee.

"Yet another anti-freedom politician jumps in the race today for POTUS. As cool as he is with his rock 'n roll persona, this typical liberal's erroneous grasp of our Bill of Rights merely continues the strange and disastrous agenda of Barack Obama," Palin wrote in a post on Facebook.

In response, O'Malley challenged Palin to join the game via Twitter.

"Good to hear from you after all these years, @SarahPalinUSA," O'Malley tweeted. "There's still room in GOP primary for another entrant!"

Palin had said that she was "seriously interested" in running for president, according to HuffPost, but so far there hasn't been any concrete indication of her running in 2016.

The Democratic front-runner Hillary Clinton, on the other hand, welcomed O'Malley to the race via Twitter on Saturday.

Watch video of Martin O'Malley's announcement below, via C-Span: