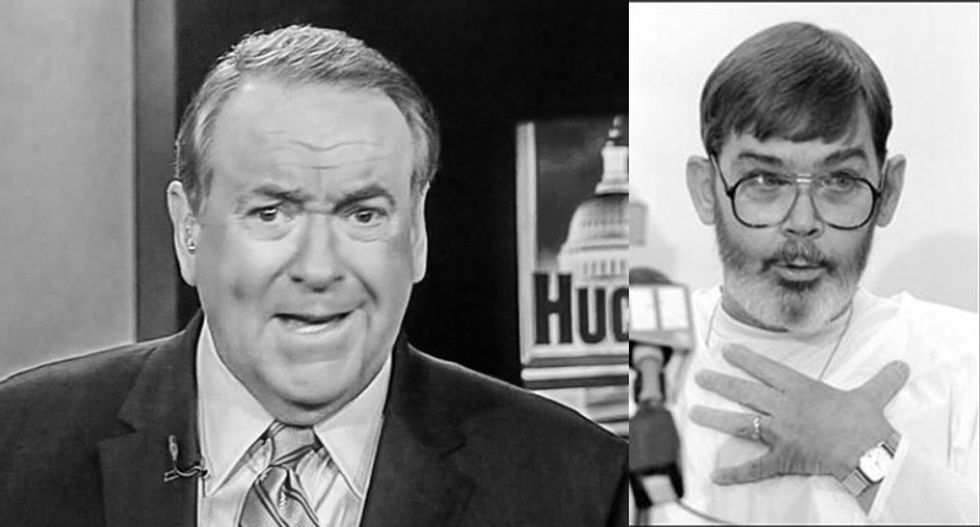 Whether it was by grand design or fate or God toying with his true believer's hopes that a savior will rise up and save the Christian world from Hillary "The Hildebeast" Clinton, this week saw the launch of three campaigns that -- to keep with the theme here -- don't stand a snowball's chance in Hell.

It is highly unlikely that either will last more than a few primary states due to the combination of having nothing better to do and having campaign consultants -- who couldn't land a viable candidate -- promising at light at the end of the tunnel... for a few dollars more.

More likely they are both in it to build up some street cred in case the GOP attempts another vice presidential diversity Hail Mary pass like they did with Sarah Palin, -- and we all know how that worked out.

Which brings us to Mike Huckabee who announced yesterday.

Since Huckabee spent the last six years hosting a show on Fox News, there is no shortage of zany/offensive/downright moronic things that he has said on-air that will come back to haunt him, including inside stories still to come from those potty-mouthed "trashy" Fox women he said he was forced to work with.

Sure to be at the top of everyone's hit list is Huckabee's involvement in the parole of Wayne Eugene DuMond -- career criminal and rapist -- who raped and murdered another woman in Missouri after Huckabee lent him a helping hand and got him paroled.

The full details of Huckabee/Dumond can be found here (format-free, unfortunately) by the Arkansas Times, but here are a few things you need to know.

Dumond was arrested multiple times from 1972 to 1976 for charges ranging from murder to molestation to rape. Each time he walked after agreeing to testify against others or after getting a slap on the wrist.

In 1984 he raped 17-year-old cheerleader Ashley Stevens of Arkansas, who happened to be the third cousin of Bill Clinton, and was later convicted and sentenced to 20 years in prison.

Egged on by evangelicals and conservatives who believe that Bill Clinton is Satan incarnate, and that Dumond was railroaded, Huckabee involved himself in Dumond's parole hearings, writing to him to say, "Dear Wayne - My desire is that you be released from prison."

Despite receiving letters from women who had previously been assaulted by Dumond, Huckabee met with the parole board, in a meeting that was not recorded, and which later voted 4-1 to parole Dumond on the condition he leave the state.

Said parole board member Ermer Pondexter, “I signed the [parole] papers because the governor wanted Dumond paroled. I was thinking the governor was working for the best interests of the state.”

After moving to to Missouri in August 2000, Dumond was once again arrested only months later for the rape and murder of Carol Sue Shields.

Dumond went to prison again where he later died.

It is entirely possible that politics and score-settling with Bill Clinton had no bearing on Huckabee's brief love affair with Dumond. That, as a good Christian, he was trying to love the sinner while hating the sin.

But he can also expect, in what looks like a field of twenty-plus Republicans trying to shoulder each other out of the race while maintaining their own Jesus street cred, to be given the same passive-aggressive Christian treatment.

They'll let everyone know that they forgive Mike Huckabee for releasing a rapist to rape (again) and kill a young woman, while at the same time flooding the airwaves with every gory detail.