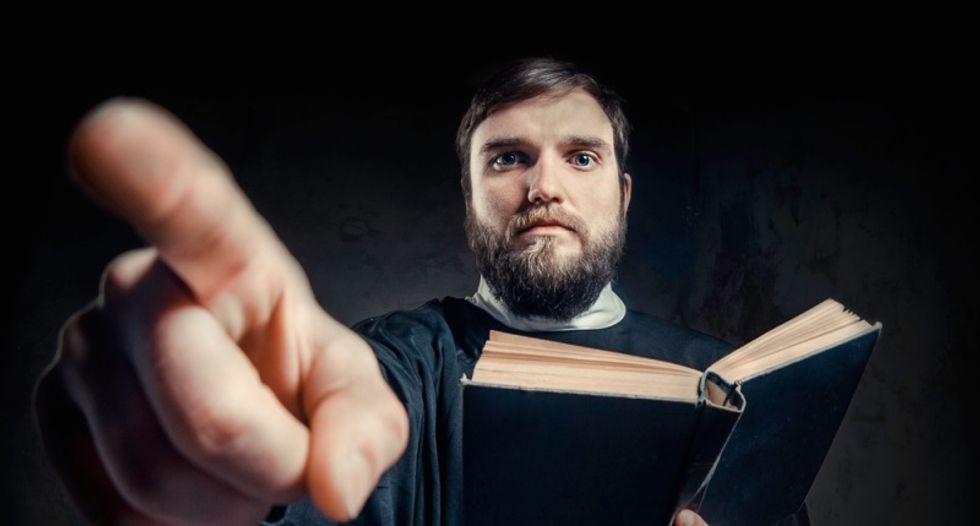 In light of revelations that he solicited companionship with men on Grindr, the popular hookup app, Reverend Matthew Makela has resigned as pastor of St. John's Lutheran Church and School in Midland, Michigan, Pink News Reports.

St. John's website has removed Makela's biography from its staff page, but it has added a letter from senior pastor Reverend Daniel Kempin to parishioners, alerting them to the preacher's departure, and urging them to be wary of reporters.

"Pastor has acknowledged that there was sin and repentance," Kempin reassures his flock. Kempin concedes it's the "end of our time together in ministry," but that he encourages churchgoers to pray for Makela and his family.

Makela's resignation is difficult enough, Kempin continues, but "to make matters worse, though, the details of sin that have been kept confidential are being posted online by those who seek to do harm to the Makela family and to St. John’s."

"I write this to you to warn you that you may be confronted with the details of the sin," Kempin cautions parishioners.

Makela and church leadership have taken down Facebook pages that the media might wish to rifle through in search of incriminating evidence. "But the internet and age of communication being what it is," Kempin laments, "I have no way of guaranteeing that you will not come across this information in some way."

Should a member of St. John's church come across information on the Internet pertaining to Makela's Grindr travails, Kempin urges them not to panic, not to respond to media wanting to "generate traffic to their website," and to alert church leadership with "any information the members need to have."

"However," Kempin notes of St. John's senior officials, "we do not intend to use the internet as the primary means of communication at this point."

"See you in Church," Kempin says in closing.

Queerty reported on Monday that Makela, in ministry at St. John's since 2010, confirmed himself as a Grindr user. The site offers screenshots of Makela's Grindr interactions -- including a shirtless photo of the pastor -- as supporting documentation.

Queerty further notes that Makela has a record of disparaging members of the LGBTQ community on Facebook, posting (since deleted) screenshots of the reverend decrying gay marriage and stating that the "transgender movement is going to assist opportunistic sickos in preying upon children and others."