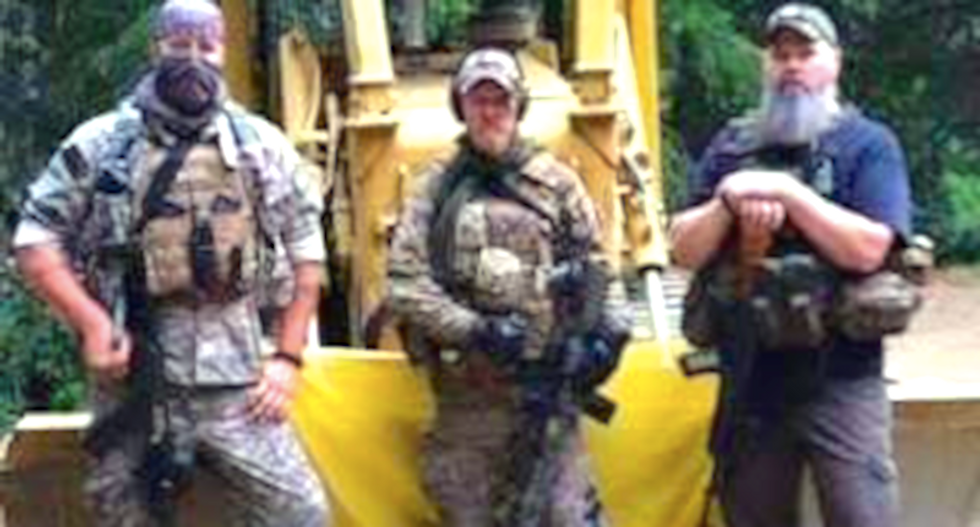 A coalition of public policy advocates warned on Tuesday that a group of armed conservative activists who have been guarding a mine in southern Oregon for over a month are a sign of an emerging violent anti-government movement.

The groups behind the newly formed "Ballots Not Bullets" coalition said they will seek to promote democracy over what they call militia-style extremism and will try to counter these kinds of movements nationwide.

Created by seven organizations including the Coalition to Stop Gun Violence and Catholics in Alliance for Common Good, Ballots Not Bullets is a response to an ongoing legal battle between the owners of a mining claim outside the small Oregon town of Medford and the U.S. Bureau of Land Management.

The armed guards were still guarding the mine as of Tuesday, Oath Keepers spokeswoman Mary Emerick said, although she would not say how many.

The founders of Ballots Not Bullets, who say they may lobby Oregon lawmakers on the issue, describe the dispute as the latest manifestation of last year's standoff between Nevada rancher Cliven Bundy and the federal government, in which the BLM sought to seize Bundy's cattle after he refused to pay grazing fees.

The federal agents backed down after an armed standoff.

"It is a rejection of any kind of democratic compromise and the endorsement of the use of weapons and violence to get your way," said Mark Potok of the Southern Poverty Law Center, a coalition member.

Emerick said the Oath Keepers do not condone violence and require that guards be vetted and pass a background check. She said she thought critics might be basing their opinions on "other incidents around the country."

More than 100 protesters gathered at the BLM offices in Medford last month, prompting the agency to close its operations for the day.

Local community groups say some residents were scared when out-of-state guards were recruited to watch the mine.

"It seems like they're digging in and they're trying to stay," Jessica Campbell, organizer for the Rural Organizing Project, an Oregon activists group, said of the Oath Keepers.