More than 2,000 UFO believers gather in California because they don't want you 'snickering' at them 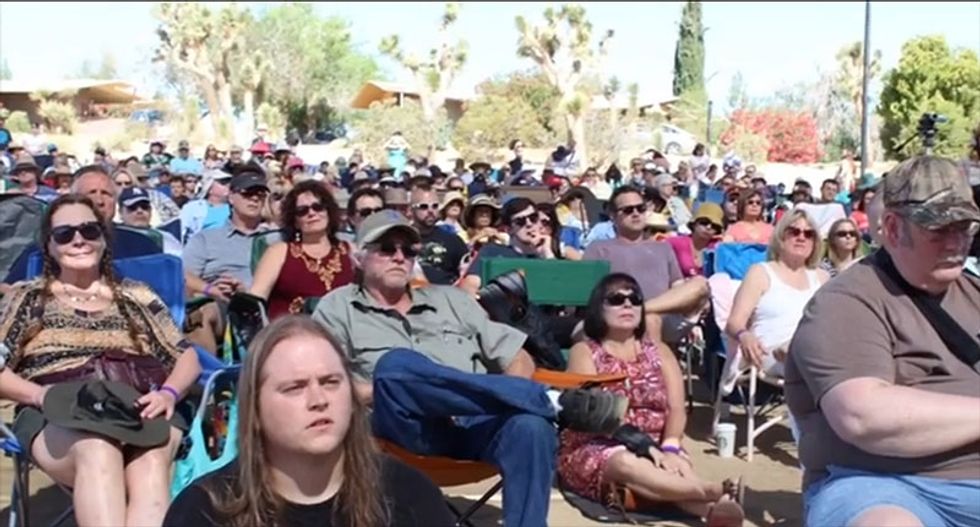 More than 2,000 UFO enthusiasts descended on High Desert, California this weekend to attend Contact in the Desert -- an annual UFO conference, the Desert Sun reports.

In its third year, the event is one of the largest and the fastest growing conventions of its kind in the U.S. This year, the four-day event attracted more than 2,000 attendees and featured nearly 50 presentations -- double the size from last year.

The conference is a haven for alien researchers and conspiracy theorists. Paul Andrews, a Los Angeles event coordinator who co-founded Contact, said he started the conference to create a "safe environment" for discussing evidence of ancient aliens, crop circles, gigantic secret pyramids and an extensive government cover-up of alien evidence. Researchers can share their theories at Contact without anyone "snickering," he said.

According to Andrews, the location of Contact, the Joshua Tree Retreat Center, is chosen because of its long history of UFO sightings.

"We think the likelihood of someone having a sighting or having an encounter are higher here than anywhere else," Andrews said.

They also try to keep their minds open to the most unconventional theories -- such as the belief that the earth is flat.

"Everyone here is a searcher," said Patrick Hart, 72, an Oregon chiropractor and two-time attendee of Contact.

"'What is truth? What is the nature of reality? What are we doing here? What is life about?' Those are the kind of answers I have spent the better part of my life constantly pushing for."

Watch video below, courtesy of the Desert Sun.

President Donald Trump has attracted a number of conspiracy theorists and people dedicated to the belief that an operative known only as "Q" was delivering messages from inside his administration. Over the past several months, however, those Q followers have turned against several Trump allies. Now his former chief of staff is coming out against the QAnon group.

In his new book, Meadows implies that the supporters are essentially nothing more than kooks

Marjorie Taylor Greene: Jan. 6 defendants are being mocked in jail 'because of the color of their skin'

Rep. Marjorie Taylor Greene (R-GA) on Tuesday suggested that people who allegedly rioted on January 6 are facing discrimination "because the color of their skin."

Greene made the remarks during a press conference that unveiled a Republican-back report on the January 6 defendants who are currently housed at the D.C. Jail. The event also featured Reps. Louie Gohmert (R-TX), Matt Gaetz (R-FL) and Paul Gosar (R-AZ).

A Tennessee man was charged with assault after he punched a parking garage worker who refused to show identification in a recorded confrontation that went viral.

Edward Brennan and his mother, identified as "Bitsy," spotted Johnny Martinez checking cars for parking permits in a Nashville garage and began watching him, and the worker said he tried to avoid the pair until they confronted him.