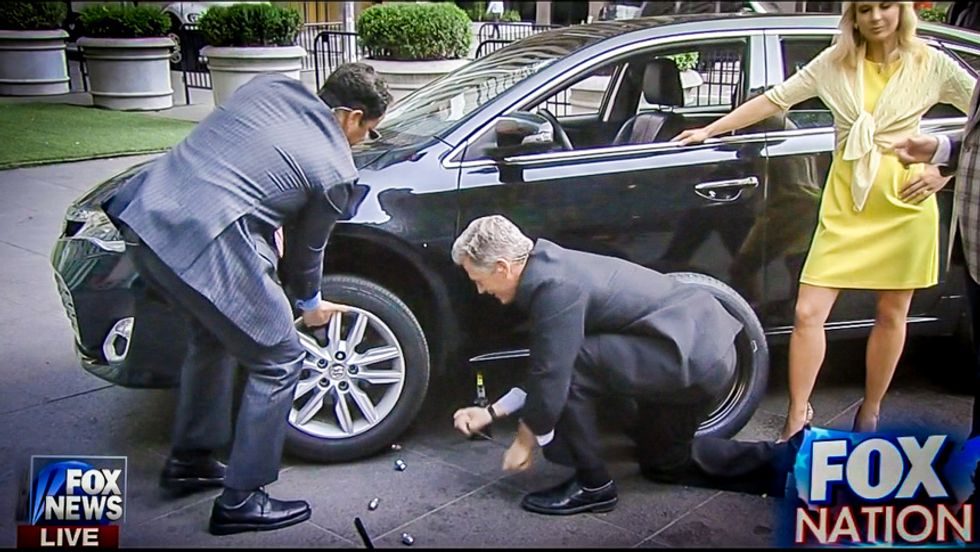 The hosts of Fox & Friends nearly caused serious damage to a rental car on Tuesday while trying to prove their "manhood" by changing a tire.

Round one of the test was to tie a necktie, which Kilmeade accomplished with the help of his teeth and his co-host.

Kilmeade and Brown teamed up once again for changing a tire on a car that had been loaned by Enterprise Rent-A-Car.

"This is what a man does, not just a male," Van Orden noted.

"Whoa, watch it, Brian!" Brown exclaimed as the car began to roll forward, suggesting that the parking brake had not been engaged.

"Jack it up?" Kilmeade asked.

"Okay, so lug nuts are out," co-host Elisabeth Hasselbeck chimed in.

"Watch your feet, Elisabeth," Brown warned. "The jack is falling."

"The jack is falling?" Kilmeade said while attempted to push the car back onto the jack.

"The jack is falling," Brown repeated.

"This is amazing," Van Orden said, turning to the camera.

Meanwhile, Brown furiously cranked the jack counterclockwise to lower car. However, all but one of the lugs had been removed and the host concluded that he might damage the vehicle by lowering it further.

"This is why I have a AAA card," Kilmeade opined before producers gave up on the segment and returned to the studio for a news update.