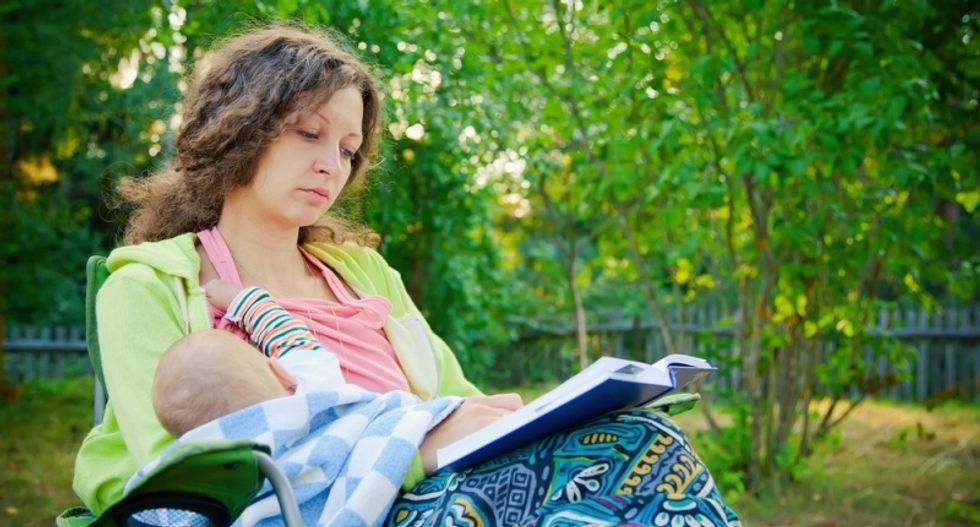 A mother breastfeeds outside (Shutterstock)

A building manager in Oklahoma threatened a mother and her family with eviction after neighbors complained that she was breastfeeding her infant child on her own porch.

Missy Smith has lived in her apartment for "around a year," SheKnows reports, and Smith has rented from the same property manager for longer than that. But after a tipster filed a complaint, management notified Smith that if she got caught again feeding her child without the use of a bottle, she would be forced to take her stuff and move somewhere else.

Smith writes on Facebook that employees of the management company informed her that "my breastfeeding is child endangerment. That by me breastfeeding outside of my home I am putting my daughter in danger because a 'pervert' might see her nursing."

Cognizant that breastfeeding is a legal practice in the state of Oklahoma, Smith called police for backup against what she felt was an unlawful threat of eviction. The dispatcher who answered Smith's call sympathized with the landlord, however, and instructed the nursing mother to obscure breastfeeding from view when outdoors, "or stay inside."

Smith confronted her property manager with legal text supporting her right to breastfeed her child. The rental company has since halted any process to evict Smith and her family.

A "nurse in" protest -- which one of Smith's friends organized while the mom of an infant was still facing the prospect of getting kicked out onto the street -- is still scheduled to take place this Sunday.

Advocacy group MomsRising points out that, despite breastfeeding's clear health benefits, the American policy environment makes it difficult -- if not impossible -- for many women to breastfeed for a whole year (which the American Academy of Pediatrics recommends), let alone two (the length of time preferred by the World Health Organization).

"Most mothers are not breastfeeding exclusively for any length of time," MomsRising relays on its website. 11 percent of American women make it through a baby's first six months without supplementing with formula. In contrast, however, 74 percent of new mothers report they want to breastfeed, but that lack of maternity leave, unsupportive work environments, and "discrimination in public, and from stores, restaurants, airports, and employers" discourages some 60 percent of women from achieving their personal breastfeeding goals.