Oops: Watch as indicted ex-FIFA official cluelessly uses The Onion to defend himself 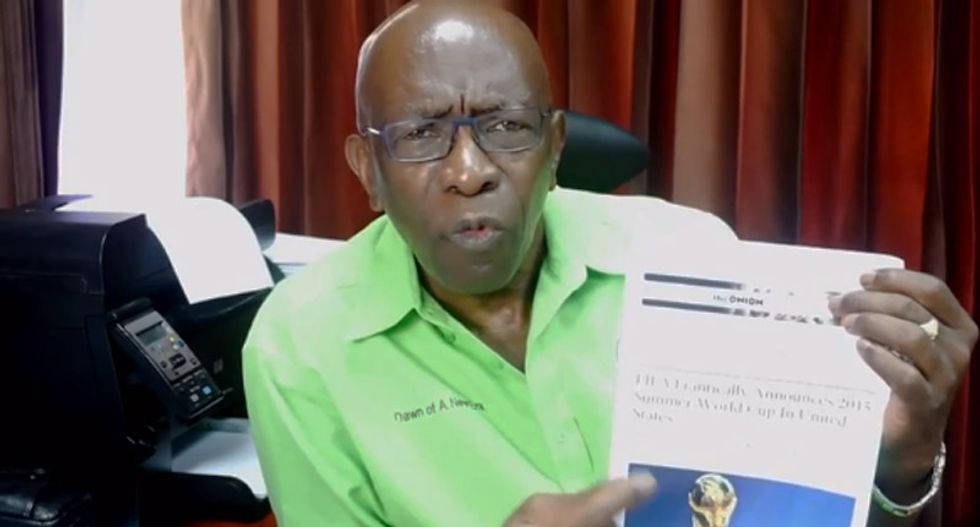 In a strange video that the Onion itself couldn't have made up, embattled ex-FIFA vice president Jack Warner used an article from the parody news source to defend himself against corruption charges filed earlier this week. The video, replete with stirring, cinematic background music, was posted to Warner's Facebook page then deleted Sunday, according to Deadspin.

Reflecting a sweeping indictment by the U.S. Justice Department against FIFA officials, including Warner, The Onion article hilariously states that after "frantically" announcing a 2015 World Cup in the United States, the games would be kicking off "this afternoon" and that at press time, the U.S. was leading defending champs Germany after being awarded 12 penalties in the game's first three minutes.

Apparently unaware that The Onion is famous for parody and that in fact, no World Cup was spontaneously scheduled for this afternoon, Warner holds the article up as he talks into the camera.

"If I was so bad, if FIFA is so bad... why is it the USA wants to keep the FIFA World Cup?...Something has to be wrong," Warner states, cluelessly holding up The Onion article.

If the charges made in the indictment turn out to be true, Warner and FIFA are in fact pretty bad. But Warner has proven himself to be alarmingly gullible.

The Justice Department's 47-count indictment against 14 FIFA officials includes charges of wire fraud, racketeering and money laundering. The indictments allege that since 1991,  the accused had received $150 million in bribes from sports marketing and broadcasting corporations in exchange for exclusive rights to air international soccer games, including the World Cup.

In 2011, Warner was caught doling out paper bags containing $40,000 in cash in exchange for votes to install Qatari businessman Mohamed bin Hammam as FIFA president. Warner had defended himself by calling the bribes "gifts" and saying anyone who doesn't want the "gifts" could return the cash to bin Hamman.

Warner, a Trinidadian and former schoolteacher, was arrested Wednesday by Swiss police along with six other FIFA officials in Zurich.

Watch the video, uploaded to YouTube by Robert Mackey, below.