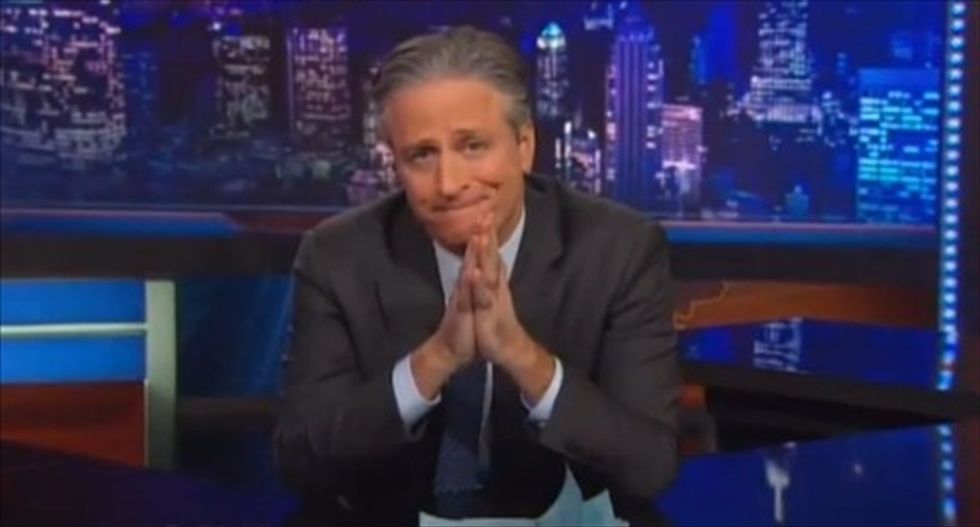 Jon Stewart has spent 16 years skewering U.S. politicians and media as the liberal host of television's "The Daily Show" - and many Americans think he gets it right on the issues with his satirical look at the news.

In a Reuters/Ipsos online poll, the Comedy Central comic topped a list of 10 pundits, with more than half of respondents saying they agreed with him on at least some issues. Only 12 percent did not agree with him on any issues at all.

Stewart, who will host his last Daily Show episode on Aug. 6, also ranked highest on two other traits - fearlessness and most admired. Of the 2,013 people 18 and older polled, nearly half found him unafraid in confronting "issues that others ignore," while 48 percent said they admired him.

Daily Show alumnus Stephen Colbert, who spoofed conservative talk-show hosts for nearly a decade on Comedy Central's "The Colbert Report," tied Stewart as most admired and placed second to him on issues and fearlessness. Colbert will soon take over hosting "The Late Show" on CBS.

Nearly 90 percent of respondents were familiar with Limbaugh's work, the most for any commentator. Limbaugh's representatives did not immediately respond to a request for comment.

Stewart has become a favorite of liberals for mock news broadcasts that relentlessly poke fun at politicians, mostly Republicans, and the news media, with the conservative Fox News Channel drawing special attention.

Around the world, viewers can watch a weekly compilation of The Daily Show on CNN International, and broadcasters in other countries such as Canada show full episodes. South African comedian Trevor Noah will take over from Stewart, who has yet to say what he will do next and declined comment on the poll.

Stewart's combination of humor and commentary has led a shift in American punditry toward liberal satire, said Eric Boehlert, a senior fellow at the progressive group Media Matters for America.

Conservative talk shows can sound angry while liberals tap into comedy and satire in ways conservatives have not, he said. People often appreciate liberal humor because it "punches up" at authority, Boehlert added.

Tim Graham, executive editor of NewsBusters, a conservative group monitoring the media, said Limbaugh and others incorporate humor, but in general comedy is not a leading characteristic of conservative commentary.

O'Reilly was the best performing conservative in the poll, finishing third behind Stewart and Colbert with viewers on confronting tough issues and on sharing the same views. He scored 43 percent in both areas.

He was fifth on the list of most admired pundits behind Stewart, Colbert, Maher and Briton John Oliver, another Daily Show veteran who now anchors a similar program on HBO.

Conservatives who strike serious notes on radio and news shows, such as Laura Ingraham and Glenn Beck, generally scored lower in the poll than liberals like Maher. The sole liberal with a talk show in the survey, Rachel Maddow of MSNBC, landed in the middle of the pack.

Stewart and Colbert rose to prominence when a Republican, former President George W. Bush, was in the White House. At the same time, they produced short bits that were easy to pass around through social media.

The Reuters/Ipsos poll had a credibility interval, a measure of accuracy, of 2.5 percentage points for all adults.