Prince turns from recluse to healer in Baltimore rally 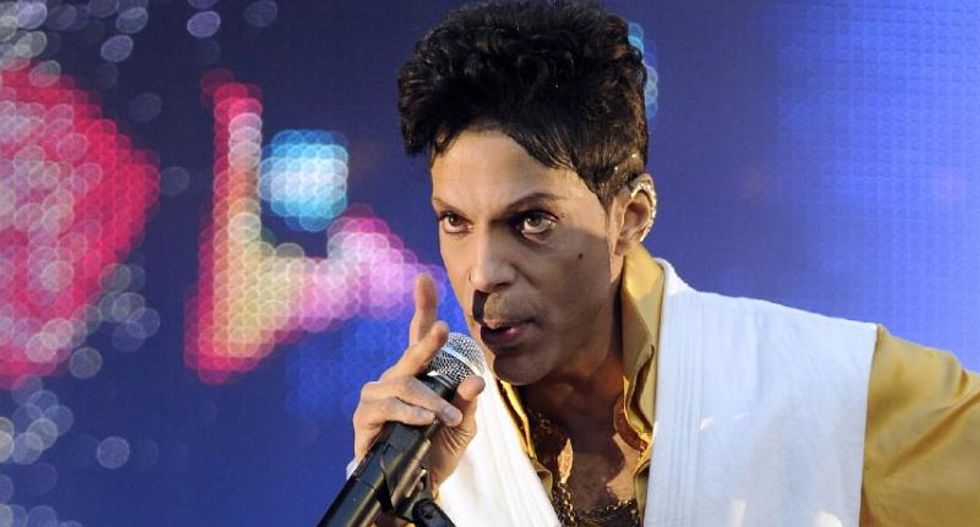 Prince, the famously withdrawn and eccentric pop superstar, refashioned himself as a community healer as he led a peace concert in Baltimore (AFP Photo/Bertrand Guay)

Prince, the famously withdrawn and eccentric pop superstar, refashioned himself as a community healer as he led a peace concert in Baltimore.

Two weeks after sometimes violent protests erupted over the death of African-American Freddie Gray, who sustained injuries in Baltimore police custody, Prince threw what he called a "Rally 4 Peace" at a downtown arena in which he debuted live a song dedicated to the scarred US city.

For the song, "Baltimore," Prince brought to the stage Marilyn Mosby -- the young prosecutor who pleasantly surprised many demonstrators by swiftly bringing charges against six police officers over Gray's death.

"Are we gonna see another bloody day? / We're tired of crying and people dying / Let's take all the guns away," Prince sang in "Baltimore," which he released online before Sunday's concert.

"Does anyone hear us pray? / For Michael Brown or Freddie Gray? / Peace is more than the absence of war," Prince sings, before leading the chant, "If there ain't no justice, then there ain't no peace."

Prince drove home his message of empowerment in one of his signature songs, "Purple Rain," as he told the crowd in an extended interlude, "The system is broken, so it's going to take the young people to fix it."

Prince, sprightly with elegant dance moves at nearly 57 years old, told the crowd to seek "peace" as much as "piece" -- a slice of the economic output of their community.

"I want to stay tonight in a hotel that is owned by one of you," he told the crowd of thousands, many wearing gray, at Prince's urging, in tribute to Freddie Gray.

The activism marks a revival of sorts for Prince, who, since his superstardom in the 1980s, has made headlines not only for his music but for his idiosyncrasies such as changing his name to an unpronounceable symbol amid a dispute with his record label.

Even the tickets for the show -- on sale a whole three days in advance -- showed a different approach for Prince who in recent years has grown fond of announcing concerts at the last minute.

But even if he has preferred the seclusion of his Paisley Park estate in Minnesota, Prince has never, from the start of his career, played it safe.

In an allusion to his early risk-taking, Prince performed the title track of "Controversy," his sexually and politically forthright 1981 album, with the opening lines: "I just can't believe all the things people say / Am I black or white? / Am I straight or gay?"

Prince foreshadowed his new activism at the Grammy Awards in February, where he used a brief appearance to back the Ferguson-inspired slogan, "Black lives matter."

Prince -- whose relationship with the Internet has swung from an early embrace to recent hostility -- also returned to modern technology to promote the concert.

The singer, who abruptly shut down his social media accounts last year, is now back on Twitter and aired part of the concert on Tidal, the fledgling streaming service backed by rap mogul Jay-Z.

In a show of magnanimity not just political but musical, Prince performed for Baltimore "Don't Stop 'Til You Get Enough" by Michael Jackson -- often described in the 1980s as Prince's rival, even if the real extent of their hostility remains a matter of conjecture.

The cover offered a chance for Prince to show off his ever-impressive falsetto. He also demonstrated his voice's power on "Nothing Compares 2 U," which was written by Prince but whose most famous interpreter -- Sinead O'Connor -- recently said she was finished singing it.

Yet Prince's overall interest during the two-and-a-half-hour show appeared not to be just to excite fans with his hits but to delve into the music's deeper roots -- the blues, soul and funk, as driven by pairs of both trombones and saxophones.

He set the measured tone of the concert with opener "Let's Go Crazy" -- a song frenetic by definition, but which Prince performed with a restrained deliberation.

Prince said that proceeds from the concert would go to charity, and authorities readily accommodated the show, with the city's light rail extending its hours.

The only hint of trouble came not with police but the concert's security, who zealously enforced Prince's ban on photos.