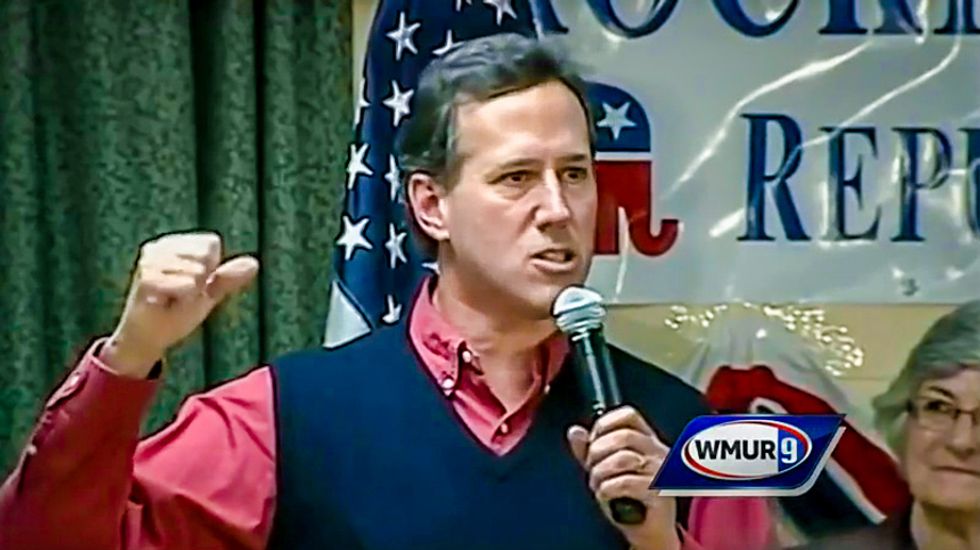 Likely Republican presidential candidate Rick Santorum said this week that other GOP candidates were not fanatical enough about opposing abortion, and that's why Christianity was on the decline in the United States.

Speaking at Cornerstone Action's 15th Anniversary Dinner in New Hampshire on Tuesday, the former Pennsylvania senator noted that a recent Pew Center survey found that the number of non-religious Americans was surging while fewer and fewer people were identifying as Christians.

Santorum explained that reporters asked him more questions on abortion than any other Republican candidate.

"Why didn't you ask them questions and why did you ask me three? Silence and then finally someone perked up and said, 'Because we know you mean it,'" Santorum said, pausing for applause.

"You probably saw the numbers that came out today on religion in America," he lamented. "The category with the highest percentage in this country are no longer Catholics, used to be Catholics. No longer Protestants, for a second it was Protestants. It's now unaffiliated. A quarter of Americans are now non-religious."

"Don't think that who leads this country, don't think that what the national debate is about doesn't affect your children and the country they're going to live in, which is going to be very different than the country you're living in today," Santorum warned. "The bottom line is, if you want to change the country, you've got to find someone who is bold enough to lay out a vision."

According to Santorum, a presidential candidate must be "willing to live it, not just preach it; willing to do something, not just say something."

"We haven't won. Why? Because we play defense on the issues millions of Americans care about," he opined. "I know up here you're going to get a lot of pressure to sort of go along with what seems to be the flavor of the moment."

"But if you win, here's my question. What do you win? Does America win? It's up to you."