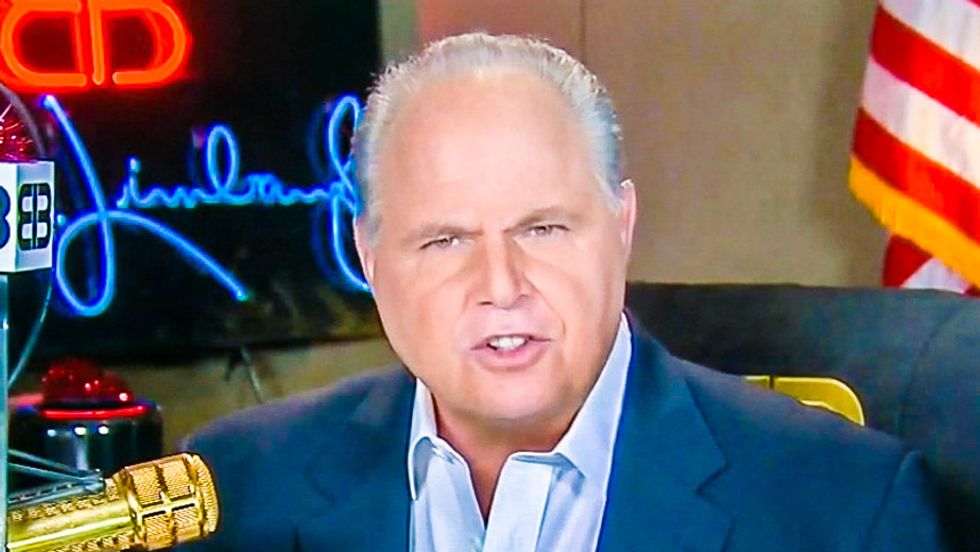 Radio host Rush Limbaugh on Tuesday explained that Christianity was facing a sharp decline in the United States because Americans were leaving churches that had not "fallen prey to the dark side" and embraced same-sex marriage.

A recent Pew Research Center survey showed that the number of Americans identifying as Christians had dropped by 8 points in the last seven years. At the same time, Americans who were not affiliated with a religion rose from 16 percent to 23 percent.

On his Tuesday radio show, Limbaugh explained that the drop in self-identifying Christians could be explained by "homosexual marriage."

"And in some cases female and lesbian ministers, which you might think in some cases could cause people to leave those churches," he opined. "Those denominations -- the Methodists, the Presbyterians, the Lutherans -- dropped a lot of members."

"They have left their churches because of social issues and the evolution of their churches to social areas they didn't want to go and don't feel comfortable being in," the conservative host continued. "If you look at the evangelical churches, they haven't lost anything. Their membership is holding pretty steady. Where the message has remained, where the mission has remained the same, where the members of the church don't think any corruption is taking place. They're still hanging in there."

"Some might say, the churches that haven't fallen prey to the dark side. All of this silly social evolution."

Limbaugh argued that "less than 1 million gay activists" were able to "bully and steamroll an entire country."

"How is it that 70 percent of the population can be bullied and silenced and coerced into accepting societal evolution with which they disagree because of their religious beliefs?" he asked.

Listen to the audio below from the Rush Limbaugh Program, uploaded by Media Matters on May 12, 2015.