Scientists warn lawmakers: Home heroin-making technology could spread within a ' couple of years' 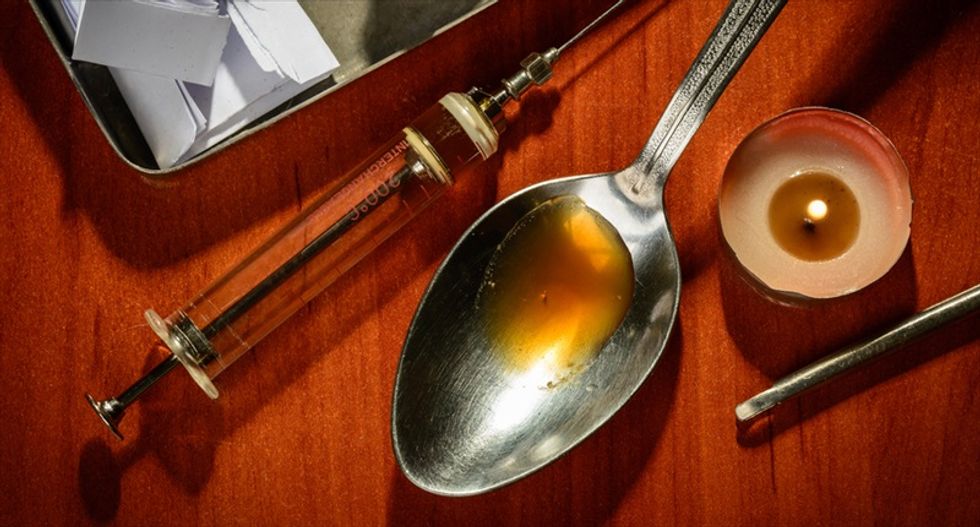 'Preparation of heroin with a spoon, a syringe and a candle on a table' [Shutterstock]

Researchers have managed to reproduce the way poppies create morphine in the wild, but warn that the technology needs urgent regulation

Home-brewed heroin could become a reality, scientists have warned, following the creation of yeast strains designed to convert sugar into opiates.

The advance marks the first time that scientists have artificially reproduced the entire chemical pathway that takes place in poppy plants to produce morphine in the wild.

Scientists warned that the findings could pave the way for opium poppy farms being replaced by local morphine “breweries” and called for urgent regulation of the technology. In theory, opium brewing would be no more difficult to master than DIY beer kits, raising the possibility of people setting up Breaking Bad-style drug laboratories in their own homes.

Tania Bubela, a public health professor at the university of Alberta and co-author of a commentary on the research in the journal Nature, said: “In principle, anyone with access to the yeast strain and basic skills in fermentation could grow morphine-producing yeast using a home-brew kit for beer making.”

The team behind the advance have stopped one step short of linking together the entire chemical chain within a single easy-to-brew yeast strain, and announced a self-imposed moratorium on the work to allow law enforcement agencies and regulators time to catch up.

“We’re certainly not aiming for the illicit drugs market, that’s for sure,” said Vincent Martin, a microbiologist at Concordia University in Québec and co-author. “We realised that we’re entering into a brave new territory here. Me and my collaborators felt that various regulatory bodies should be consulted and talked to and we should build a consensus of how to take this forward.”

The findings, published in the journal Nature Chemical Biology, mark a turning point in efforts that have been made for more than a decade to replicate in microbes the 15-step chemical pathway in the poppy plant.

Scientists had previously succeeded in reproducing the second half of the chemical pathway, but the initial conversion of glucose to a compound called reticuline had proved a sticking point. The latest study cracks this problem for the first time by inserting genes from the poppy plant, sugar beet and a soil-dwelling bacteria into yeast.

Several existing yeast strains are available that can turn reticuline into morphine, and the scientists said that combining the two halves of the process was now feasible – although they have not yet attempted this final step.

“What you really want to do from a fermentation perspective is to be able to feed the yeast glucose, which is a cheap sugar source, and have the yeast do all the chemical steps required downstream to make your target therapeutic drug,” said John Dueber, lead author and a bioengineer at the University of California, Berkeley. “With our study, all the steps have been described, and it’s now a matter of linking them together and scaling up the process. It’s not a trivial challenge, but it’s doable.”

He predicted a timeline of a “couple of years, not a decade” for the reliable production of controlled drugs by sugar-fed yeast.

Being able to synthesise opiates in the laboratory raises the possibility of engineering new therapeutic forms of the drug, designed to be less addictive, more powerful or longer lasting, for instance.

“It creates a platform for finding new chemical structures that could have a lot of potential benefits,” said Martin.

However, it also raises concerns about the yeast falling into the wrong hands. In their commentary, Bubela and colleagues at the Massachusetts Institute of Technology (MIT) call for urgent regulation of the technology warning that it could lead to an alternative system for current criminal networks, particularly in North America and Europe, where the drugs are in high demand. “Because yeast is so easy to conceal, grow and transport, criminal syndicates and law-enforcement agencies would have difficulty controlling the distribution of an opiate-producing yeast strain,” the authors write. “All told, decentralised and localised production would almost certainly reduce the cost and increase the availability of illegal opiates -- substantially worsening a worldwide problem.”

Future strains of morphine-producing yeast could be designed to have unusual nutrient requirements as a biocontainment measure, Bubela suggests. Such strains should also be kept in bio-secure facilities in the future, with similar safeguards to those used by researchers working with anthrax or smallpox.

Globally, more than 16 million people use opiates illegally. The drugs come from the misuse of prescription pain medications and from illegally cultivated poppy crops in countries such as Afghanistan, Laos and Mexico.

“The time is now to think about policies to address this area of research,” said Dueber. “The field is moving surprisingly fast, and we need to be out in front so that we can mitigate the potential for abuse.”

Martin said the team had no plans to complete the chain until regulations were in place to do so safely. “If this is something that we shouldn’t do, let’s talk about it now,” he added.