The 'Mad Men' finale's naked hippie played 1,000 cats in a mini-musical and it is awesome 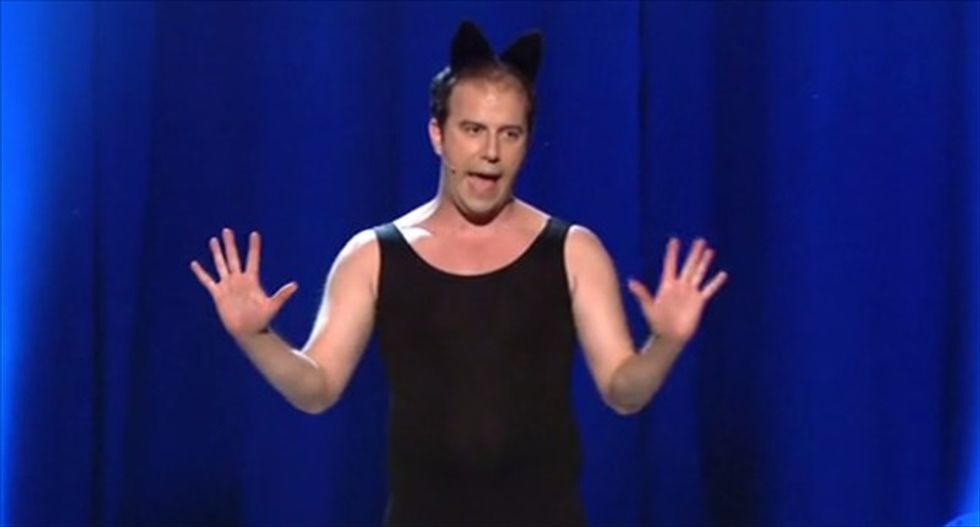 While some fans of Mad Men might only have discovered comedian Brett Gelman during Sunday's series finale, his oevure extends into the musical realm -- specifically, a one-man theatre spoof in which he plays 1,000 cats.

The Verge's Chris Plante took note of Gelman's "One Thousand Cats" on Monday, reporting that the 16-minute show started as a half-hour project.

"'One Thousand Cats' is not a play," he says in the video, playing an artiste. "It's not a musical. It's not even really a performance; it is a universal consciousness that is physicalized through me."

Clad in cat ears, Gelman's character goes on to vocalize the life struggles of each and every single cat promised in the title. As The Apiary put it, "no cue cards, no teleprompter, just a streaming onslaught of mewing kitties one after another."

Gelman debuted the one-man show in 2009. Since then, the Illinois native has gone on to several projects, including a co-starring role on the sitcom Married before appearing on Mad Men -- naked -- as a member of the hippie commune Don Draper (Jon Hamm) joins in Big Sur, California.

"It was crazy," Gelman told Vulture regarding the shooting process for the finale. "I can't imagine how wild it was for [Hamm] because he was the only regular cast member who was there. None of the people from the beginning were on set with him."

Watch "One Thousand Cats" in its entirety, as posted online, below.

A demand from Donald Trump that Texas officials audit the 2020 presidential ballots in select counties is already creating confusion and chaos in the Lone Star state, reports CNN.

On Thursday, the former president fired off a letter to Gov. Greg Abbott (R) demanding an audit of ballots in counties where President Joe Biden did well, and the office of the secretary of state issued a statement reading, "the Secretary of State has the authority to conduct a full and comprehensive forensic audit of any election and has already begun the process in Texas' two largest Democrat counties and two largest Republican counties -- Dallas, Harris, Tarrant and Collin for the 2020 election."

Chancellor Angela Merkel on Saturday urged Germans to give her would-be successor Armin Laschet the vote to shape Germany's future, in a last-ditch push to shore up his beleaguered campaign 24 hours before Germans vote.

Laschet, 60, has been trailing his Social Democrat challenger Olaf Scholz in the race for the chancellery, although final polls put the gap between them within the margin of error, making the vote one of the most unpredictable in recent years.

For critics outside the orbit of fallen US biotech star Elizabeth Holmes, her pledges of a medical revolution reeked of quackery. But the faith of close backers -- from a future Pentagon chief to a lab scientist -- was very real.

"I thought it was going to be the next Apple," Adam Rosendorff, one-time laboratory head at Holmes's now-defunct blood testing startup Theranos said at her Silicon Valley fraud trial on Friday.