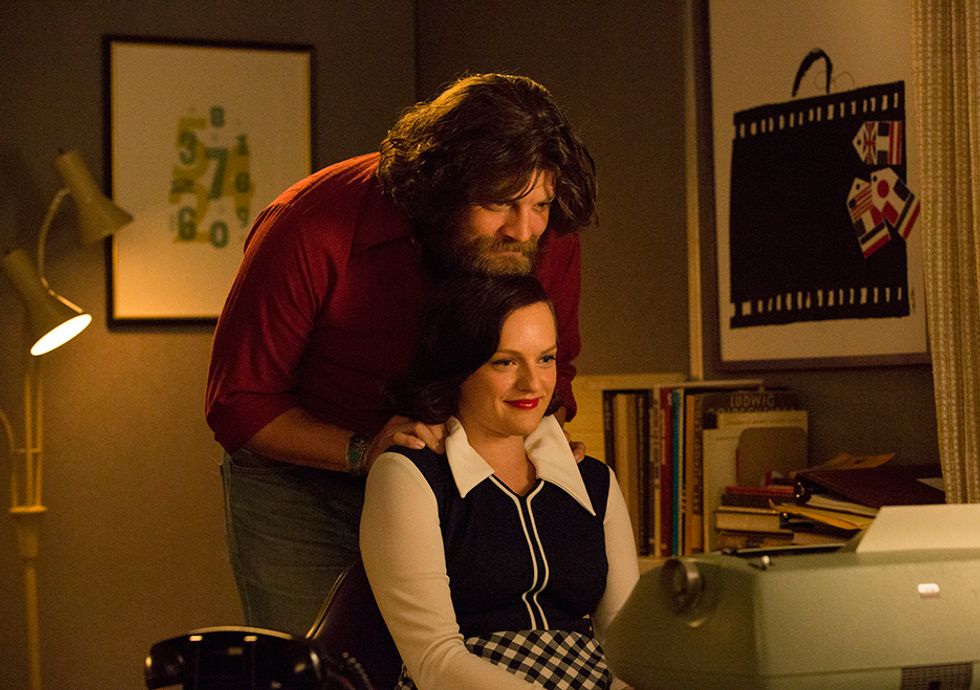 Don't cry, everyone. Okay, go ahead and cry. Mad Men is over. Our take on the surprisingly closure-oriented last episode:

I would like, before we get in this, to take a moment to virtually high-five Todd VanDerWerff and Eileen Sutton of Vox for predicting, with uncanny accuracy, how the show was going to end. The prediction:

Picture it, if you will.

Don walks into the room with the client. Everything is on the line. His career. His family. His future. Everyone leans forward (including us). He smiles, launching into his pitch with something like "I'd like to talk to you about family," and then either the door to the room closes (shutting us out) or the screen fades to black.

And out of the blackness, we begin to hear perhaps the most famous ad of the 1970s.

The only thing he got wrong is that the show merely implied this ending without showing it. But that this is the ending, I think, is indisputable.

But what does it mean? I avoided all recaps and spoilers before watching the episode last night, so our take on it was fresh. As soon as I finished recording and handed this over to Marc to edit, I started reading recaps and found that there's a debate online about whether the ending, with the Coke ad, was cynical. Don goes back to advertising and goes right back to commodifying our deep human emotions to sell us crap, after all. So I found it interesting that I landed right in the middle of this debate. Yes, I think the ending, as I say in the video, is a little cynical. But not entirely cynical.

It feels warm and hopeful.

That’s why I can’t accept that the Coke ad’s use is purely cynical — that it’s snickering at the viewer by suggesting that Don learned nothing from any of his life experiences, much less the last half of season seven, and that he eventually went back to New York and strip-mined the remains of the counterculture and California-style self help in order to sell cola....

By the final few minutes of Mad Men’s last episode, I think the hero has started to become okay. He’s begun to reinvent himself one more time, not as yet another discretely defined (false) person, but as the two men he always was, in “perfect harmony,” as the Coke ad says. And maybe he’s started to detach from the “positions” on himself that were formed in childhood, and cemented when he didn’t get off that train at his hometown stop in 1950.

That smile wasn’t just about having a clever idea for an ad. It was the real thing.

The debate over Mad Men that has gone on throughout its series has been whether the show is critical of the 60s and its characters or whether it's romanticizing that era and the people in it. People in camp #1 say that it's obvious in the way that satirical takes are wound throughout, from the casual racism and sexism to even things like litterbug behavior and driving drunk without seat belts. People in camp #2 claim that none of that matters, because everyone looks good and is witty, therefore it must be propaganda selling this era to us.

Both camps are wrong. It's not an either/or debate. I think the idea that it has to be comes from a tendency, that the internet exaggerates, to approach art with this hyper-political, reductive approach that turns everything into a black-and-white debate over whether something has the "right" politics. (See: The debacle over Game of Thrones, in which the question of whether it worked as art was completely lost in the point-scoring over how much rape one "gets" to show on TV.) This debate incorrectly assumed that Mad Men must have some kind of propagandistic purpose, either progressive or reactionary, and whether it was good or not depended on whether it was the right kind of political propaganda.

But the ending forcefully reminds us that this reductive approach to art can shield us from some of the greater pleasures and lessons that storytelling provides, pleasures that are ill-served by hot takes about whether an episode passed political muster. Which isn't to say that there aren't political points being made by the show. But that they are part of a larger whole, a commentary not just on the politics of this era, but about humanity and how we, as people, survive and even thrive.

Which is a long and hopefully not too academic way to say that the ending managed to both be cynical and hopeful at the same time. Absolutely, the show has been critical from day one of the way advertising commodifies and cheapens the transcendent human emotions to sell us crap. But, and perhaps this is something Weiner himself learned while writing these characters over so many years, that doesn't mean that advertising has no creative or artistic pleasures in it. Perhaps that is because the ideas that advertising tries to commodify resist commodification. It's crass and exploitative to harness the idea of world peace to sell Cokes. But that feeling---that deep desire for connection that ad touches on---is real. It continues to be real even after the ad is made. If that ad provokes that feeling in you, that feeling is real. We are not so easily commodified as we fear.

I think this sense is best exemplified by Peggy's storyline. Peggy gets a happy ending. Is she going to be a great novelist? Probably not. For whatever reason, writing ads is what really taps Peggy's creative energies. She doesn't even seem to remember, half the time, that she's trying to move units. She gets to sit there all day, spinning stories about human nature and the meaning of it all. Sure, those stories are then used to sell hamburgers and soap, but she still got to tell the stories. And there's meaning in that. Not everything is black-and-white. Ads can both be crass and transcendent. Life defies these simple dichotomies.

That's why we keep returning to stories, even though they often resist our attempts to subject them to reductive political analysis. (Is Peggy a good person or bad person because she's a liberal Democrat instead of a socialist revolutionary? We must have a definitive answer!) Stories allow greater truths, often conflicting truths, to be teased, pondered, and often not resolved. And that's okay. More than okay: Necessary. It is why we are human and not robots. So yeah, I liked the series finale of Mad Men. Well done, Matthew Weiner.

During an interview on Fox News Sunday, Wallace noted that Banks had deflected when asked about Cheney's criticism of former President Donald Trump, who has claimed that the election was stolen from him.

With CNN host noting McConnell has admitted he will do everything he can to obstruct President Joe Biden, Clyburn jumped all over the Senate Republican's remarks.

Appearing on Steve Bannon's podcast on Saturday, MyPillow CEO Mike Lindell launched a fresh attack on Dominion Voting Systems claiming their case against him in a $1.3 billion lawsuit is "coming apart at the seams" -- without providing any details.

According to Insider, Lindell sat down with the former Donald Trump adviser where he claimed to have voting machines that he is investigating in his efforts to prove the company participated in voter fraud to keep Trump from being re-elected.