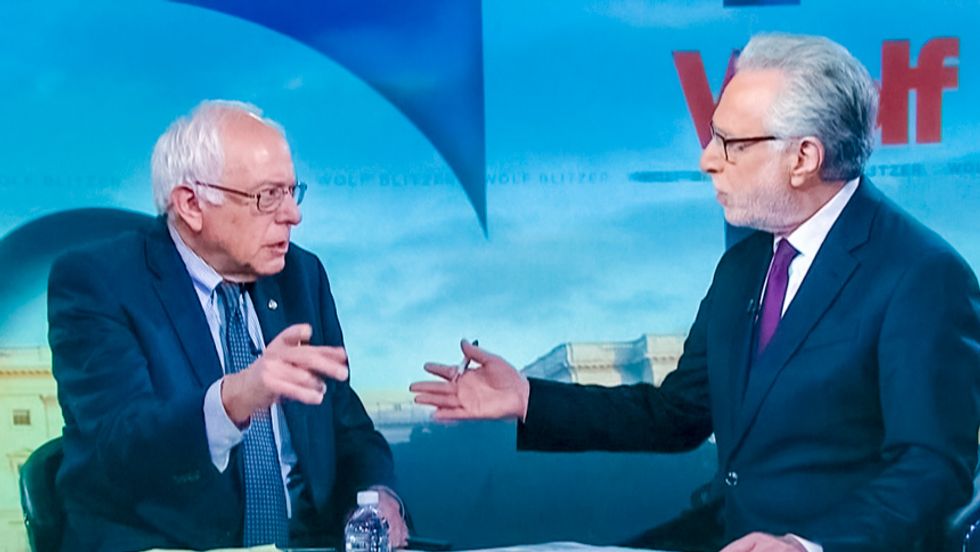 According to Sanders, it was time for candidates to do more than just talk about income inequality in general terms.

"What we need to do is be very specific about what we're going to do about it," the Vermont senator explained to CNN host Wolf Blitzer in an interview on Tuesday. "Ninety-nine percent of all new income is going to the top 1 percent -- top one-tenth of 1 percent."

"What we need to do is create millions of decent paying jobs by rebuilding our crumbling infrastructure. What you need to do is say to the wealthiest people and largest corporations, 'You know what? You're going to have to start paying your fair share of taxes. You can't stash your money in the Cayman Islands.'"

To prepare Americans for middle class jobs, Sanders said that he had "introduced legislation that would make public college tuition free."

"Where's the money going to come from?" Blitzer wondered.

"A tax on Wall Street speculation, and that's exactly where it should come from," Sanders insisted.

"What does that mean, a tax on Wall Street speculation?" Blitzer pressed.

The Democratic candidate noted that people were "becoming phenomenally wealthy" by speculating on derivatives "and every other type of esoteric instrument that they can."

"What we're going to impose is what exists in dozens of countries around the world, a very modest tax on the transference of large amounts of stock," Sanders said.

"Is that going to pay for tuition?" Blitzer asked, trying to wrap his head around the plan.

"More than that," Sanders replied. "This is a very effective and progressive way to raise money. The estimate is, it could bring in as much as $300 billion a year."

"Is Hillary Clinton committed to this cause as are you?" the CNN host said.

"Wolf, you're going to have to ask Hillary," Sanders advised. "I don't work for her, I don't know. I've just introduced legislation. I don't know where Hillary Clinton is coming on this. I believe we've got to draw in Germany, Scandinavia, many other countries around the world and say, 'If you have the ability, regardless of your income, you're going to be able to go to college tuition free.'"

But Blitzer still seemed a little confused by the idea: "So you want to raise taxes?"

"On the very wealthiest people in this country, absolutely," Sanders shot back.