WATCH: Georgia graduation ceremony breaks down after principal rants about 'all the black people' 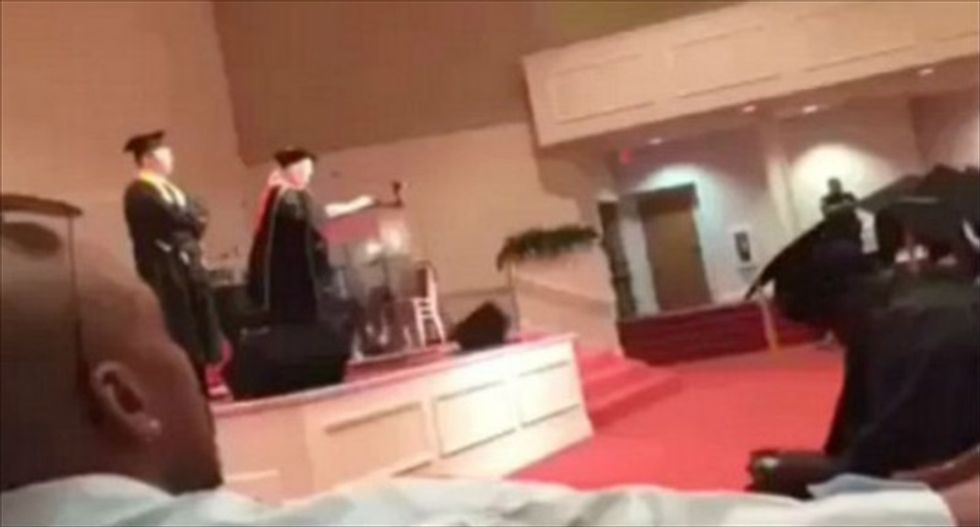 The graduation ceremony at a private school in Stone Mountain, Georgia sank into disarray after the school's principal and founder clashed with the audience, The Grio reported.

Footage of the event at TNT Academy shows Nancy Gordeuk chiding crowd members after she mistakenly ended the ceremony before the valedictorian made his speech.

Gordeuk reportedly tried to get the audience to return to their seats, despite many of them leaving the building, leading to her apparently becoming frustrated.

"I think y'all owe this young man an apology, especially that goober that was coming through with his little thing. That was so rude," she says, alluding to an unidentified student. "Where are you, you little coward? Come on back up here and let's talk."

After that remark, three white people can be seen standing up and leaving. Seconds later, Gordeuk says, "Y'all are the rudest people I've ever seen in my life."

The crowd reacts with alarm, as Gordeuk orders staff members to close the doors. The man videotaping Gordeuk can be heard urging others, "Just let her do her thing."

"You people are so rude to not listen to this speech," Gordeuk continues, as the unidentified valedictorian, a white person, stands near her. "It was my fault that we missed it in the program. Look who's leaving, all the black people."

At that point, the crowd reacts loudly again and students and audience members can be seen making their way out.

The school describes itself on its website as "a nontraditional private school for middle and high school students who may not be properly served by the public education system."

Watch footage of the confrontation, as posted online, below.

Another view of the last few seconds of Gordeuk's remarks, as posted by the Daily Mail, can be seen below.