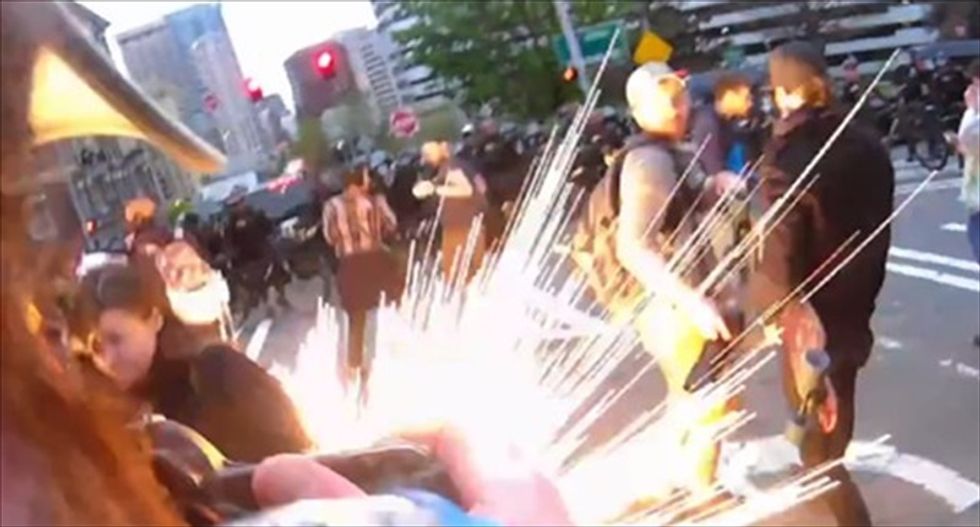 The use of flashbang grenades by Seattle police is being investigated following the events of a protest late last week, including what appears to be wrongful use of non-lethal weapons, the Stranger reported.

The Office of Professional Accountability's (OPA) probe came as footage from freelance photographer Alex Garland shows one grenade landing near Seattle Times reporter Paige Cornwell's foot. Cornwell suffered burns and bruises to her right foot. Garland can be heard asking Cornwell, "You all right?" before walking away from police with her.

About a minute into the video, another grenade can be seen going off at the feet of an unarmed demonstrator. A line of police officers is then seen advancing, using their bicycles as a buffer against the retreating protesters and photographers. A minute later, another grenade goes off in the middle of the crowd.

Another local photographer, identified online as Scott Lum, was left with a bloody face but could not identify the cause. The Stranger published a photo of Lum online, which can be seen below:

Cornwell did not go into detail regarding her injury, citing insurance and workplace injury claims, but told the Stranger, "The whole thing was very confusing."

OPA director Pierce Murphy said his office is looking into the training and use of the grenades, while observing that "it seemed like they were getting thrown in the middle of crowds."

According to the Stranger, that would countermand the recommendation in a 2011 department training video telling officers, "Don't throw it into the crowd, because that will cause mayhem and confusion."

Authorities have not released information on how many of the "blast ball" grenades it used during the protest. According to the Times, 17 demonstrators were arrested this year.

"I think we did it right," Assistant Police Chief Paul McDonagh said.

Murphy said he is also considering investigating a separate incident filmed and posted online shows an officer pushing a man from behind seemingly without provocation:

"It's hard to imagine what the context is," Murphy is.

Watch Garland's footage, as posted by the Stranger on Monday, below.