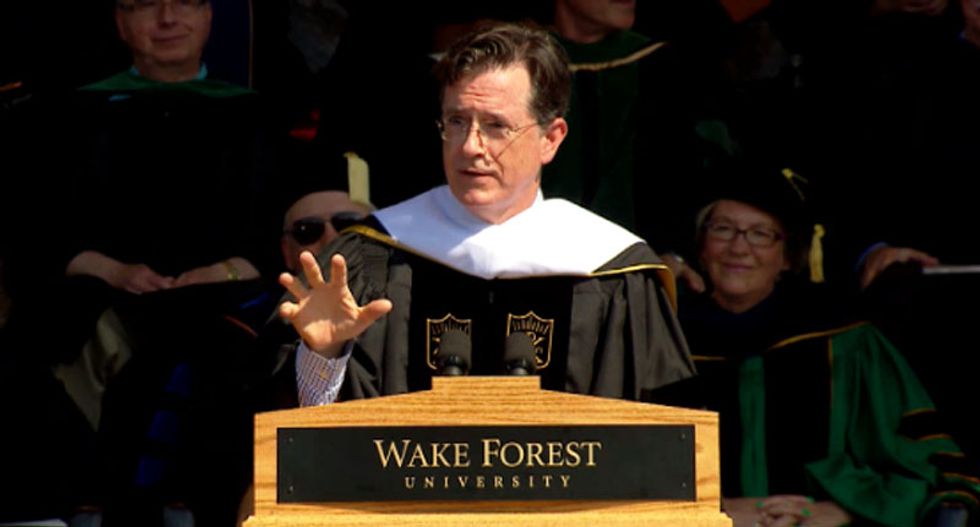 Soon-to-be Late Show host Stephen Colbert addressed the 2015 graduating class of Wake Forest University on Monday afternoon, where he poked fun at the GOP and urged students to strive for a better future.

"Wake is your past now, it is my responsibility as a commencement speaker to prepare you for what awaits you in the future," he told more than 1,900 students and their families. "Here it is: No one has any idea what's going to happen. Not even Elon Musk, that's why he's building those rockets. He wants a 'plan B' on another world."

"It's time to say goodbye to the person we've become, we've worked so hard to perfect, and to make some crucial decisions in becoming who we're going to be. For me, I'll have to figure out how to do an hour-long show every night. You at some point will have to sleep. I'm told the Adderall wears off eventually. Good luck."

Colbert said the only thing that was certain in 2016 was the upcoming presidential election -- and that the number of Republican candidates seeking the presidential nomination would continue to increase.

He told the graduates to have their "own set of standards," which he said was key to his own success.

"Having my own standards is why I could keep going at times when no one laughed or when I thought the person I was interviewing might throw a punch at me. It’s probably why the epitaph on my tombstone will probably read, 'Well, I thought it was funny,'" Colbert explained.

"Try to make the world good according to your standards," he added. "It won't be easy. Get ready for my generation to tell you everything that can't be done -- like ending racial tension, or getting money out of politics, or lowering the world's carbon emissions. And we should know they can't be done, after all, we're the ones who didn't do them."

"Your job, pro humanitate, is to prove us wrong -- because if you don't prove us wrong, then forget everything I've been saying and instead I'd like to leave you with a bit of wisdom I picked up from a documentary I saw this weekend: Mad Max Fury Road. All you young people really need to succeed in the future is a reliable source of fuel and fanatical cadre of psychopathic motorcycle killers," he said. "May you ride eternal, shiny and chrome."

(Colbert's speech begins around the 59:00 mark)