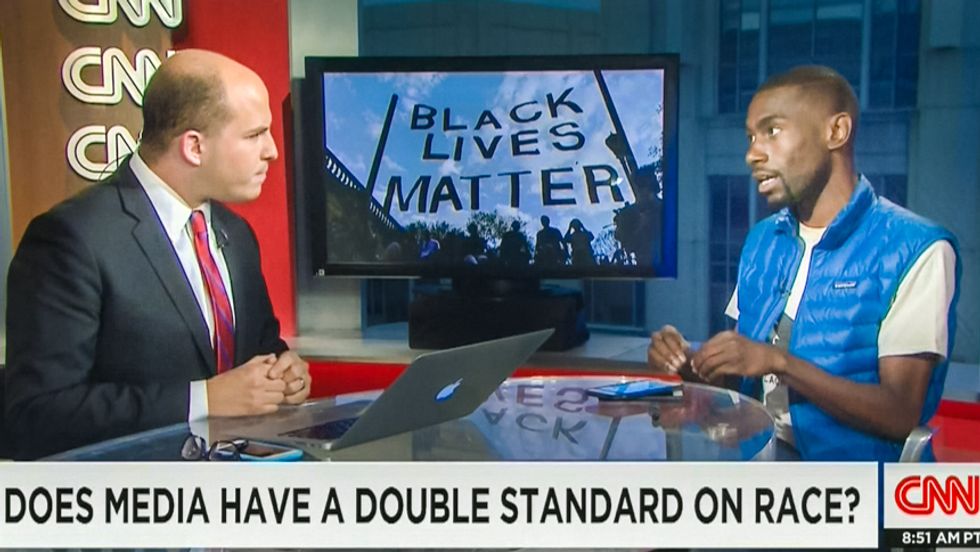 Social activist Deray McKesson criticized the media over the weekend for the way they had handled a white biker shootout in Texas with "nuance," but black rioters in Baltimore who did not kill anyone were not "humanized" in the same way.

In an interview on Sunday, McKesson explained to CNN host Brian Stelter than he had quit his job as a school administrator after Michael Brown was killed.

"The reason that I quit was that I want to figure out how to use my skills and talent to fight in this space because you just can't kill people," he said. "All the work that I did in education was important, but kids have to be alive to learn."

McKesson slammed the media for what he called "a constant pathologizing of black bodies," which gave the impression that "when black people assemble, it's always criminal."

"What you saw in St. Louis, the police were literally attacking protesters, and that wasn't always the narrative that was put out by the mainstream media," he noted. "What you saw in Baltimore sometimes, you saw people sort of focusing on the property damage and not actually people actually focusing on what caused the unrest in the first place."

"So when I see broadcasts, news articles that present the police narrative as true," McKesson added before being interrupted.

"But it is oftentimes true," Stelter insisted.

"Is it true?" McKesson asked. "I don't know if it was true with Mike Brown. Maybe we differ on what true means."

"You're talking about anecdotes as opposed to statistics," Stelter replied. "Are you saying the majority of statement by police officers in the U.S. are not true, public statements, press releases."

"What I'm saying is that the police are killing people, and they're saying that it's justified in every case in a way that it just isn't," McKessan pointed out. "When I think about Walter Scott, the police gave an account that was untrue. And we would not have known unless there was a video. And there are many other cases."

"Freddie Gray is another one. The way that police mobilized to respond to his death was really different until we got a video," he continued. "We challenge the police narratives because we have reason to challenge, because we've been lied to."

When it came to the biker gang shooting in Texas, McKesson observed that the media pundits had not described the white suspects as "thugs" as they had with the black rioters in Baltimore just days earlier.

"What we didn't see [in Waco, Texas] were any dead bodies," McKesson said. "Nine people were dead, there were 18 people injured and the media didn't show any of that spectacle of blood. Right? And not that I want to see bloody bodies, but there was a stark difference."

"And you also saw the bikers chilling [after the shootout]," he remarked. "They are in gangs. This is organized crime. And they are just like hanging out at the police line after nine people are killed, and they're now saying they might have recovered 1,000 weapons. That context would not happen if those bodies were dark skinned."

"What's interesting about Waco is that there was also this nuance suddenly. Because whiteness gets nuance and blackness doesn't. So you saw with Waco, 'These are bikers, this is just like a biker group. It's a biker shootout.'"

According to McKesson, racism was insidious because people tended to think of it as an extreme.

"It's this idea that like the n-word is the only signifier of racism in America when that's actually not true," he said. "Racism is about how power is used to negatively impact people because issues of race. So, what you saw with Waco, you saw this radical humanization of people who actually committed violent crimes, who really did violent crimes in a way you did see that same humanization with people in Baltimore who were breaking curfew."

"They were treated in ways that criminalized them, really intense ways. In a way that you didn't see with actual criminals."

Watch the video below from CNN's Reliable Sources, broadcast May 24, 2015.