WATCH: Waterspout injures Florida children after launching 'bounce house' with them inside 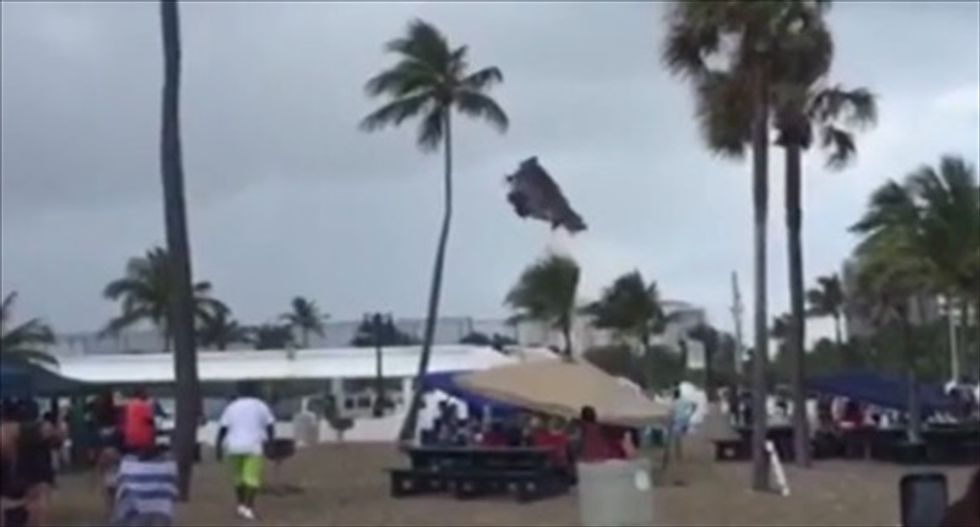 Three children playing inside a 'bounce house' in Fort Lauderdale were injured on Monday when a waterspout hurled it off the ground. [WTVJ-TV]

Three children were injured in Fort Lauderdale, Florida on Monday after a waterspout hurled the "bounce house" they were playing in off the ground, WTVJ-TV reported.

Witnesses said the children were hurt when they fell out of the inflatable structure. One of them was seriously injured when she landed on concrete next to Fort Lauderdale Beach, where it had been set up. The other two, a 6-year-old girl and an 11-year-old boy, landed on sand. All three were hospitalized.

Footage of the incident shows the waterspout reach the beach -- technically becoming an EF-0 tornado -- and making its way toward the bounce house before pulling it into the air. WTVJ reported that the structure was between 40 and 50 feet off the ground before coming back down 150 feet away from its original location.

"She was in shock, she couldn't talk. She was just screaming. Her mouth was bloody," said Jammelia Wray, who identified herself as a cousin of the two children who landed on the sand. "My other little cousin's mouth was bloody. He was just laying there. He was shaking."

According to the Fort Lauderdale Sun-Sentinel, the incident was unusual because it was not accompanied by a thunderstorm or any visible clouds overhead. A local forecaster, Chuck Caracozza, said that the waterspout carried wind speeds between 65 and 85 miles per hour with a maximum width of about 10 yards.

"Most of the time, waterspouts dissipate before they come on shore," Caracozza said. "There was probably a very minor shower in the area that had a little rotation with it, and that's what sparked it."

Watch a report on the freak incident, as aired by WTVJ, below.