Were Lincoln and Nixon gay? The ‘history’ book that is dividing America 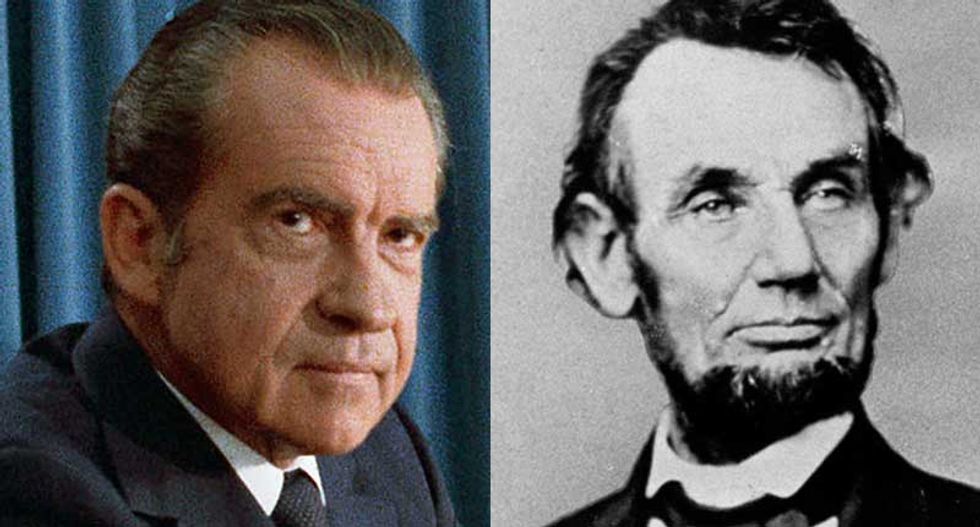 Gay-rights activist and award-winning author Larry Kramer is 79 and in failing health, but that won’t defuse the impact of his latest bombshell project: the first 800-page installment of a two-part history of America that tells of the secret gay life of figures from Alexander Hamilton, George Washington and Abraham Lincoln to Mark Twain, Herman Melville and Richard Nixon.

The American People: Volume 1, subtitled Search for My Heart, has taken nearly 40 years to complete and may prove to be one of the most provocative historical, or pseudo-historical, accounts of American history.

Kramer, who is co-founder of Aids services group Gay Men’s Health Crisis and the Aids Coalition to Unleash Power (Act Up), as well as a chronicler of queer life with plays including The Normal Heart and The Destiny of Me, said the book is a labor of love designed to counter what he feels to be the exclusion of gays – or gay life – from history books.

“It may look like fiction, but to me, it’s not,” Kramer said last week. “Most histories have been written by straight people. There has never been any history book written where the gay people have been in the history from the beginning. It’s ridiculous to think we haven’t been here forever.”

The American People, Volume I: Search for My Heart is causing consternation among historians, who say there is little evidence to back Kramer’s claims.

Ron Chernow, author of an epic 2004 biography of Alexander Hamilton – the statesman Kramer claims was at least bisexual if not entirely gay – cautions against “ransacking history in service of a political agenda”.

Kramer also claims that John Wilkes Booth assassinated Abraham Lincoln not because he was unhappy that the South was losing the Civil War, but because Lincoln had spurned him.

“You only have to look at photographs of Wilkes and [co-conspirator] Lewis Powell to see that they’re full of their own beauty. We call it gaydar – the thing straight historians don’t have. Or take Mark Twain. He had a huge gay life.”

Kramer has a history of initiating high-profile disputes. He had a war of words with Tony Kushner over acknowledging Lincoln’s orientation in his screenplay for Steven Spielberg’s 2012 biopic of the civil war president.

He scrapped with Barbra Streisand over her planned film adaptation of The Normal Heart. The author insisted it should include gay sex; Streisand retorted that her intention was “to promote the idea of everyone’s right to love. Gay or straight!”

The American People is likely to rankle with historians as there is no evidence many of historical figures were gay. He claims Lincoln biographer Doris Kearns Goodwin became “hysterical” at the suggestion of homosexual tendencies in the president but this was, he added, “only because she didn’t write it first.”

The book, which has been labelled as a novel to avoid legal complications, has divided US reviewers. LGBT magazine The Advocate said that at points in Kramer’s book “the reader will feel like the audience at Springtime for Hitler”. The New York Times calls it “a far-reaching historical exposé .”

The first volume spans pre-Columbian Florida, Puritans and early settlements (brimming with same-sex desire), the American revolution, the Civil War and the years leading to the Second World War. It includes a history of syphilis, hepatitis, hatred, ostracism, concentration camps, the CIA, and a shadowy disease. The disease is named as Aids in the second volume, due in 2017, which will bring the history to the present.

Aaron Hicklin, editor of Out magazine, said young members of the LGBT community are becoming interested in their history, a history that will not automatically be passed on because so many of the elder generation died young of HIV/Aids.

Whether it is absolutely accurate or not, The American People speaks to a need across gay and straight communities to revise historical accounts from which sexual orientation was absent. This can be seen in the mainstream – Benedict Cumberbatch as Alan Turing in The Imitation Game, for instance, or the story of Harvey Milk in Milk (2008) – but rarely goes further back in time.

“The gay historical timeline tends to go back as far as Oscar Wilde and no further,” said Hicklin. “There were pioneers before us but no one took the time to write about them, and there’s an appetite to claim a history that has been hidden from us.”

From some quarters there have been calls for a exclusively gay branch of archaeology directed solely at establishing sexual orientation (Kramer claims traces of semen found in the stools of English settlers prove his point).

But where gay rights warriors sought to define themselves as gay in defiance of the stigma around Aids, Hicklin considers that sexual orientation is no longer a singular marker of identity. “Young people feel much more a part of mainstream society, so a lot has been forgotten about the price that was paid.

“For Larry Kramer, it’s important to carry on being the archetypal activist who wants to queerify history and bring it out into the public domain.”

Perhaps the most remarkable aspect of The American People is that it was written at all. Kramer began writing it in 1975, soon after publication of his groundbreaking novel Faggots. He shelved it until 2000, when his liver was failing and he was given weeks to live.

By 2010, Kramer having had a liver transplant, the manuscript had swelled to 4,000 pages. Kramer’s editor at Macmillan says he is in no doubt that writing is what keeps him alive.

Kramer believes the injustice is continuing. Thirty five years since HIV/Aids was identified there is still no cure, and violence against gay people is increasing in several parts of the world. “We should have our own army as gays,” he told The Advocate.

“It’s lovely that we can get married, but that’s really small potatoes compared to what we don’t have, which is equality.”