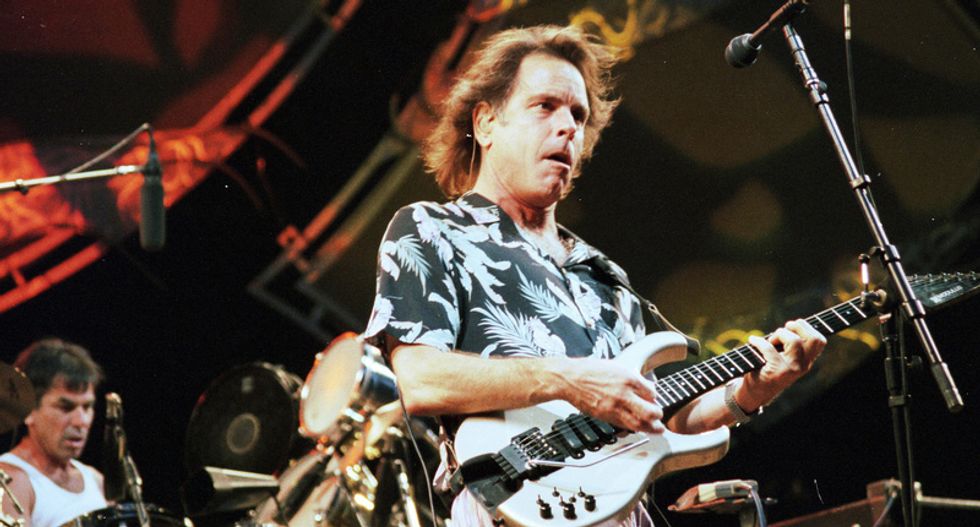 It promises to be the concert trip of the season: the Grateful Dead, performing over three nights in Chicago in early July in what the band say will be the last chance for them and their “Deadhead” fans to reconvene.

True to form, the shows are freighted with semi-cosmic synchronicity: 20 years to the day since the band’s last show with its late founder, Jerry Garcia ; 50 years since they first emerged from the San Francisco neighbourhood of Haight-Ashbury under the pharmacological direction of the band’s soundman, the Ken Kesey acolyte and LSD “cook” Owsley Stanley, aka Bear .

“I knew instantly that this combination – acid and music – was the tool I’d been looking for,” band member Phil Lesh, now 75, told the music magazine Mojo this month . “We found that while high we were able to go very far out musically but still come back to some kind of recognisable song structure.”

The Grateful Dead reunion shows – 27 and 28 June in Santa Clara, California, and 4-6 July in Chicago – have taken $50m in ticket sales and could have sold six million more seats, says Billboard . The revenue from T-shirts and tour merchandise is expected to bring in $5m more. The last gig will be shown in more than 250 UK cinemas on the evening of 6 July and, later this year, a career-spanning documentary on the band by Martin Scorsese is set to be released.

However, there has been grumbling in the US that the reunion of the core four members – Bob Weir, Mickey Hart, Bill Kreutzmann and Lesh, together with Phish guitarist Trey Anastasio playing Garcia’s parts, Jeff Chimenti and Bruce Hornsby – is not a true reflection of the sense of community that sustained the band and its Deadheads for decades.

As forerunners of the hippy-capitalist ethos, the band pioneered practices that prefigured social networking and the modern structure of the music business. The emphasis on creating a community of fans, wrote Deadhead management consultant Barry Barnes in Everything I Know About Business I Learned from The Grateful Dead , presaged the practices of Facebook, Google, Uber or Amazon that have shifted market power towards the customer.

As masters of “strategic improvisation” – the ability to plan, act and make adjustments in real time – Deadheads created an entire culture, complete with wardrobe, foods, ethics and rituals that existed beyond the sales of recorded music. Barnes believes the band was stunned that, even 20 years after Garcia’s death, demand could still be so strong.

Individual members have toured before, but never as the Grateful Dead, and never with the Fare Thee Well final tour. Barnes believes the band was caught off-guard by demand for tickets. They added two shows in California, and streaming of the concerts. “They have done a remarkable job of using technology as a way of reaching their fans.”

However, the Deadhead community has complained that there is an un-Dead undercurrent of selling out. Fare Thee Well’s “enhanced experience” – from the $2,200 Golden Road package (floor seats all three nights, plus private lounge and free food and drinks) to the top tier at $5,700 (including travel and accommodation) – sold out instantly.

Part of the issue for Deadheads, says David Meerman Scott, author of Real-Time Marketing & PR and Marketing Lessons from the Grateful Dead , is that tour promoters ignored the community organisation component of the Grateful Dead’s operation. In the past fans would have to apply for tickets through the band’s office, sending postal orders, but for this reunion thousands of tickets went on sale to Chicago Bears fans and were later touted by scalpers.

Whatever the mis-steps, the concerts prove the enduring power of the Deadhead tribe. “People wanted to see their friends. They recorded the shows and traded their tapes. The band controlled the tickets and set the prices that fans had to jump through hoops to acquire. Because they had that social network, when they announced they’d play again, everybody thought, ‘Hey, let’s get together and have a party’.”

But will the band’s community management methods finally be recognised? Giving away music but charging for tickets and merchandise may now be the mantra of a music business, but, says Meerman Scott, the Grateful Dead remains “this weird hippy alternative businesses learned from but didn’t necessarily adopt”.