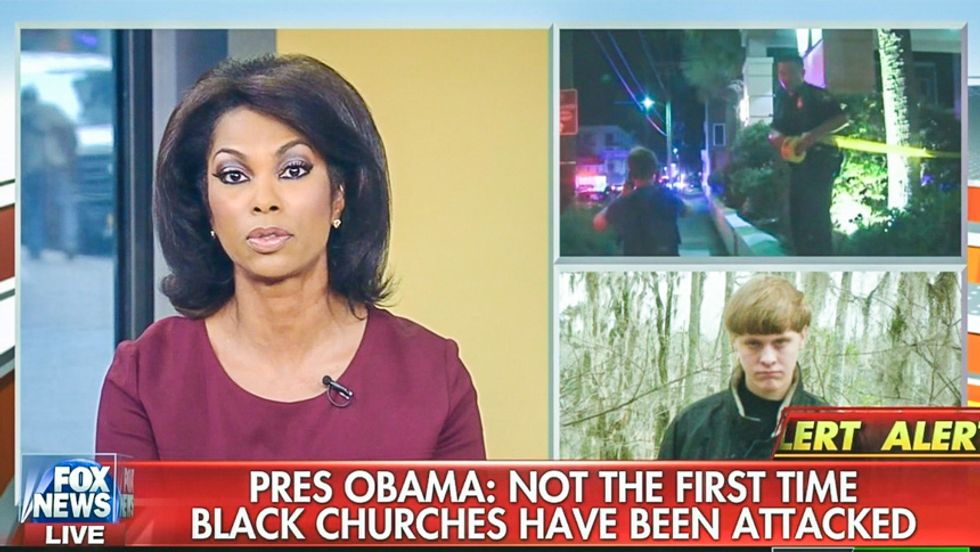 Hosts and pundits on Fox News took less than a minute after President Barack Obama addressed the murders of nine members of a historically black church in South Carolina to complain that he had politicized the incident by calling for less gun violence.

"I've had to make statements like this too many times," the president said following the shootings at Emanuel AME Church in Charleston. "We don't have all the facts, but we do know, once again, innocent people were killed in part because someone who wanted to inflict harm had no trouble getting their hands on a gun."

"Now is the time for mourning and healing," Obama added. "But let's be clear, at some point we as a country will have to reckon with the fact that this type of mass violence does not happen in other countries. It doesn't happen in other places with this kind of frequency. And it is in our power to do something about it."

Fox News host Harris Faulkner recapped Obama's comments by noting that he had offered prayers to the community, and that he had quoted the pastor who was killed in the shooting.

But less than a minute into her recap, Faulkner turned to Obama's remarks about gun violence.

"He talked in detail about gun violence," Faulkner explained, turning to frequent guest Judge Alex Ferrer. "That's when I heard you saying, 'Where are we going here?' One of the things the president said was that mass violence like this doesn't happen in other countries. Well, we know that it does."

"And we also know that this suspect reportedly got a gun for his birthday in April that was a gift," she said. "You'll have to explain to me where the president was going."

"The president has been very much in favor of and has never hid the fact and has certainly promoted gun legislation to restrict access to firearms," Ferrer replied. "The argument can be made both ways."

"Honestly, I didn't think the argument would be made this quickly," the judge opined. "I don't think when people are still, like, really in the midst of grieving it's time to throw something political out there like gun control. But people will argue the other side too."

"Arguments will be made by other people about, 'Hey, you know what, if other people in the church were actually carrying...' -- the report I heard is he reloaded five times. I don't know how accurate that is."

"But if he reloaded even once and somebody had a gun, the argument would be made, they could have taken him out before he killed all these people," Ferrer insisted. "So, that's a battle that I just don't think we should be fighting at this moment."

Watch the video below from Fox News' Out Numbered, broadcast June 18, 2015.