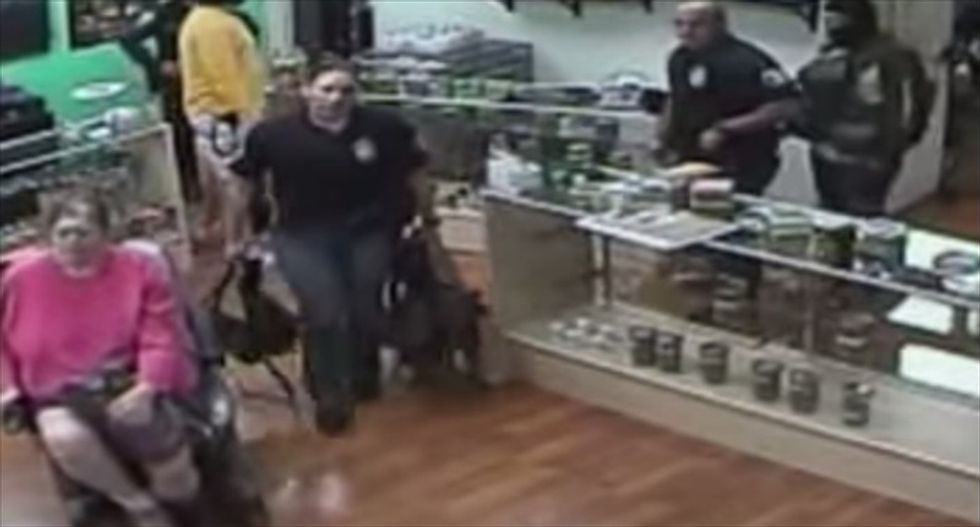 Marla James (left) walks with an unidentified police officer during a raid in Santa Ana, Calif. on May 27, 2015. [YouTube]

A medical marijuana dispensary in Santa Ana, California plans to sue police for their conduct while raiding the facility last month, after producing footage showing two officers disparaging an amputee woman who was in a wheelchair.

OC Weekly published the footage on Thursday, which shows one officer asking an unidentified female colleague, "Did you punch that one-legged old benita?"

"I was about to kick her in her f*cking nub," the woman responds, an apparent reference to Marla James, a local marijuana activist who was at the Sky High Collective when the officers conducted the raid. The same female officer is seen walking with James, who uses a motorized wheelchair.

"You know what, I was really nice to that woman," James said of the officer. "I even complimented her on her hair. I treated that woman with respect and I have no idea why she wanted to kick my stump."

The video was recorded on cameras secretly installed by the facility's owners, who were expecting to be raided after Sky High failed to qualify for a lottery held earlier this year that granted 20 local dispensaries permission to operate within the city.

James and her husband said they were at the dispensary because they had been informed by their attorney, David Pappas, about the raid. Pappas said he was tipped off by City Attorney Sonia Carvalho.

"We were there to make sure that the employees did not offer resistance," she said. "We had trained them what to do, which was not to talk and do exactly what the police told them to do."

Pappas released a 7-minute clip showing excerpts of the footage, which also shows the officers apparently disabling the dispensary's security cameras. The video also shows one male officer taking a bite out of what Pappas said was a marijuana "edible," a

"I don't know if that's [a marijuana] edible," Police Chief Carlos Rojas told Voice of OC after watching the excerpts. "Where did [the officer] get it?"

While Rojas said his department is investigating the incident, police spokesperson Chris Revere told KTLA-TV that authorities want to see the full recording of the raid.

"We're obviously concerned about the conduct that we saw in the edited video," Revere said. "We're also concerned that the video was heavily edited."

KTLA's report on the incident, as aired on Thursday, can be seen below.

The 7-minute video Pappas released, as posted online, can be seen here.