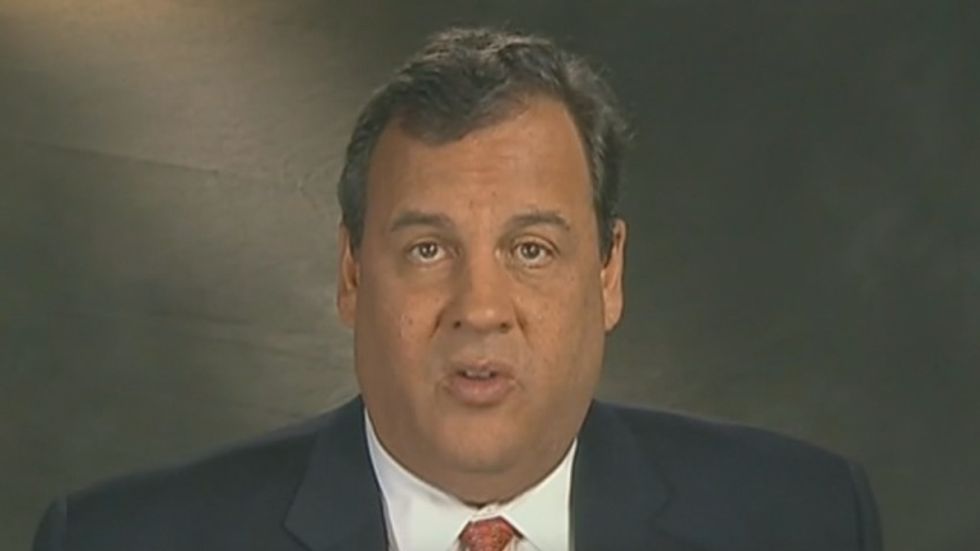 Christie’s id – which lurks under the surface with the depth and subtlety of a lurid red salami beneath one layer of Saran wrap – operates on a default playground-bully level of self-gratification, self-aggrandizement and opponent-punishment. He wants what he wants because he wants it, often for reasons no more evolved than that it, whatever “it” is, exists. He furthermore wants you to notice that he has things that you also want and, if you are someone with whom he doesn’t agree, he wants you and others to see that he can deny you what you want.

Christie’s brand of retail politics involves picking a liberal – a journalist , or a school teacher or a union member – calling him or her a liar or insisting that their question is rude or mean-spirited, and then being rude or mean-spirited in response. He raises holy hell in a room full of journalists and trusts that someone watching – someone who is carrying some resentment at some figure in some bureaucracy for some reason – sees the avatar of his own tormentors and feels validated by the vicarious verbal thrashing delivered by Christie. Every time Chris Christie stands on stage there abusing a soft, captive target the way Dick Cheney shot birds or his friends, he electrically channels the thousands of inconveniences suffered by the self-important.

And it all went to plan until, of course, it was “ time for some traffic problems in Fort Lee .” And that matter of siphoning Port Authority money off for “ pet projects .” And shady real estate deals for his donors. And the shabby, dilatory, ostensibly capricious disbursement of Hurricane Sandy relief money . And the possibility of that relief money being withheld as punishment for local officials who didn’t support said deals.

Then it was suddenly time for the passive-aggressive version of the Christie: rather than berate journalists, he conducted an hour-long mincingly patient press conference , reexplaining things that, to him, were self-evident (why? because f-you, that’s why), as if a parent were trying to convey heliocentrism to a toddler who sees the sun rise above the earth every day. It was our fault for not getting how noneof what he did was shady or unethical or illegal, not that he knew about it, and who were we gonna trust? Chris Christie, or our lyin’ eyes?

But it is very difficult to conduct a campaign as the man who is a “solution” to “Washington” when you have multiple staffers under indictment , have inched close to threat of indictment yourself or are actually under indictment. Christie has the first two and may hit the trifecta – as may Scott Walker. (Rick Perry is under indictment, but he wears it well, because his demeanor is a man who seems unaware that he is under indictment, which is consistent with his theme of being unaware of most things.)

The other problem is that Christie’s strutting bully shtick worked because the people he targeted are his base’s ideological enemies – poor people, public school employees, public employees period, union members and journalists. But the people who come after him on the Republican Primary trail will all be, to some degree, fellow travelers, and you can’t abuse Republican stereotypes to win over Republicans . Christie’s stock tactic of empowered and disproportionate abuse in response to any inquiry can’t really work when his interrogators are on his side; calling a conservative questioner an idiot to keep from having to answer the question won’t work in his own party’s primary.

And though other Republican candidates would try to overcome Christie’s problems by going further to the right and busting everyone else for being a Republican In Name Only, Christie’s fundamental selling point on a national level was that he was a conservative who could win in a blue state – the sort of conservative built not for the primary but the general election, someone too big to sweat the small-stuff of right-wing slugfests when he could smarm and roll his eyes past the early entrants. And, even if that could still work – and it can’t – Republicans haven’t forgotten when he hugged Barack Obama during the Hurricane Sandy relief nor how he used his keynote at the 2012 Republican National Convention to toot his own horn and highlight his own accomplishments rather than present to a national prime-time audience an argument for electing Mitt Romney to the presidency. He had one job then, which was to say, “I love Mitt Romney”, but instead he told everyone, “I love Chris Christie, and f-you to anyone who doesn’t.”

The most dynamic and interesting thing Christie could do now would be to pivot left – bully his fellow Republicans for living in the past when it comes to Obamacare and same sex marriage, tell them to get real, get a life and get with the 21st Century. He could tell audiences that the other candidates could never win because they don’t get it, stomp across the stage like a conservative Howard Beale delivering a purple-state reckoning to every schoolyard joker trying to build a government in a sandbox instead of in the real world where bullies can kick them apart and deliver real life lessons. It would be mesmerizing.

But that’s completely unrealistic, because it would stop the end goals of the Chris-Christie-for-Chris-Christie train – the local to nowhere that stops at every ATM. That truth-teller schtick only pays the bills if you believe it, and the only people Christie has ever kicked the crap out of on his way up have been straw men and targets of opportunity. He doesn’t swing at big checkbooks or institutions, certainly nothing solid enough to bruise the glad hand. And, when this is all over, if no indictments hold, having outclassed dead-enders like Carly Fiorina, Ben Carson, George Pataki, Bobby Jindal and a few others, he will be there at the top, with Donald Trump – brands to the last, available to speak for certain fees, never having sold out apart from that first fatal sale that embarked on a life that reached its soul terminus here.

Christie and Trump will win by losing the primary, defining themselves by the straw men who never really stopped them because they always wanted to be stopped. Chris Christie – bully, truth-speaker, authentic Springsteen-wanking road-thunderer – will be Jersey and authentic and real until he dies, still Trumpily counting out c-notes from fans who assume that America went wrong when, for some reason, the market didn’t choose him. He will walk away with the kind of premium identity that normally accompanies only the most expensive and exclusive resorts and restaurants, only this time about the most authentically tough and Jersey suburban realists and fighters. It’ll be very Springsteen (in everything but the politics), and it’ll be $100,000 per speaking engagement and everyone will be very sorry for “ the haters and losers ” who cannot see the grand plan.