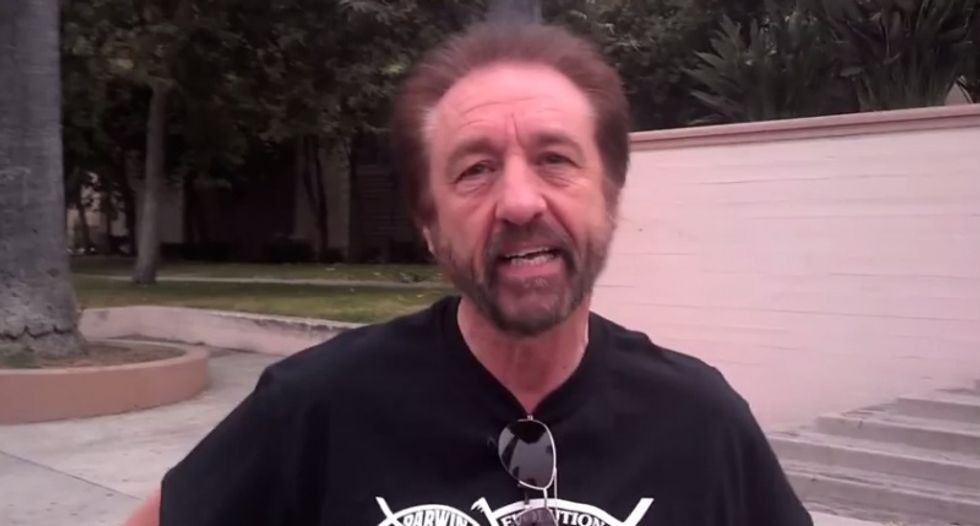 An evangelical producer says his new movie about the moral nature of homosexuality is a "model for Christian films," featuring high production values and argumentation Christians can use to better frame their disavowals of gay rights.

"Audacity" is a project Comfort began crowdfunding for last year. The movie is currently available for download (at a cost of $19.99), and will be released on YouTube in August.

“I want people to know that not every Christian movie is cheesy and predictable," Comfort tells WND in an interview with the conservative news site. "We went to great pains to avoid a second of bad acting and to make sure it has a high production value... We are delighted with the reviews so far, and by the fact that a major TV network viewed it and want to air it to 190 countries.”

The movies plot "focuses on Peter, an aspiring comedian who confronts both stage fright and a challenge to his own moral convictions. Peter must decide whether he will stand up for what he believes, even if it means losing a friendship. More than that, he will also face a harrowing life-or-death experience."

“I didn’t want to make this," Comfort tells WND of his motivations for creating the movie. "After making films about abortion and evolution, people kept asking for one that addressed the issue of homosexuality – because most Christians were very uncomfortable about how to deal with it and not sound hateful. But I adamantly said that it wasn’t going to happen. Anyone who spoke against homosexuality was instantly vilified, and nobody wants that.”

But then Comfort observed to women kissing on a California beach, asked them if they would like to be on camera, and proceeded to interview them for 14 minutes about "gay marriage, the morality of homosexuality, and the gospel."

The Christian had successfully had a conversation with a pair of lesbians that did not result in angry disagreement, which surprised Comfort. "Yet I hadn’t compromised the gospel even slightly. It was as though God had dropped the foundation for a movie into my lap."

Comfort wrote the script for Audacity that very night.

“Someone wrote to me, ‘Please please please release ‘Audacity’ as soon as possible," Comfort says, quoting a supporter's letter. "Christians need to be equipped to handle the subject of homosexuality. I found an article on my Facebook newsfeed portraying Christians in an extremely negative way. … I have faith in the film, that it will help awaken people."

WND asks Comfort to respond to potential criticisms from individuals who might call him hateful or "intolerant." Comfort acknowledges he gets frustrated by people who vocally disagree with his positions.

“A Christian doesn’t hate anyone," Comfort says, "and yet we are being painted with a wide and nasty brush by a sin-loving world."

According to Comfort, it's not his personal opinion of gays that people should focus on anyway, but God's. “My opinion is irrelevant," Comfort tells WND. "What matters is what God’s Word says on the subject... The issue of homosexuality is putting a chasm between those who love God and those who don’t. You cannot separate God from His Word."

Ken Ham, Christian fundamentalist and founder of the Creation Museum, is quoted on Audacity's website as calling the film "powerful, intriguing, challenging."

The movie's official site also features Comfort's reaction to the Supreme Court's ruling last week in favor of same-sex marriage. A suitable interpretation of the legal arrangement, according to Comfort, is one articulated by the minister who performed the wedding ceremony for Prince William and Kate Middleton at Westminster Abbey in 2011.

In what Comfort describes as a "sober and cultured English accent," the royal wedding officiant reportedly defined marriage as a "symbolic of the relationship between Christ, as the Bridegroom, and His Church, the pure white virgin Bride. That’s why the bride traditionally wears white in a wedding ceremony. It represents the cleansed and spotless Bride of Christ, the true Church, made up of all true believers."

Defining marriage as a legal right for all citizens, instead of a biblically-prescribed formula for controlling women's sexuality, "would be like me declaring that my beige VW Beetle is a yellow Lamborghini. The two are nothing like each other," Comfort writes.