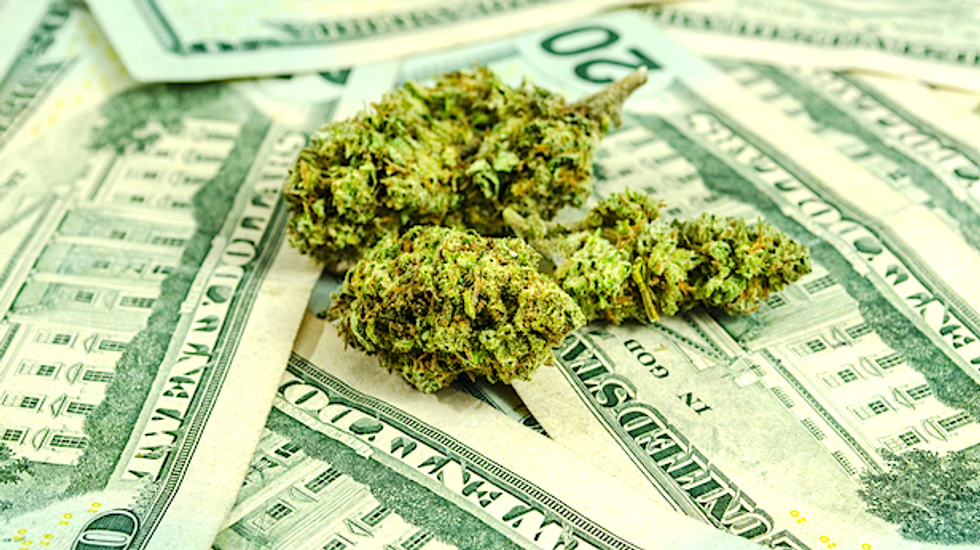 'Marijuana buds on US currency' [Shutterstock]

The Supreme Court in Colorado, a state that has legalized marijuana for both medicinal and recreational use, has just ruled that employers can fire workers if they happen to smoke pot during off-duty hours for medical reasons. It doesn't matter if the employee is an excellent worker, or if he isn't impaired while on the job.

The reasoning is fairly simple, and undoubtedly frustrating: Since the federal government still insists that marijuana is an incredibly "harmful" and illicit schedule 1 drug, the rights of people living in the 23 states with legal marijuana don't matter.

The case centers on a man named Brandon Coats who became quadriplegic after a devastating car accident and used prescribed marijuana to control leg spasms. When Dish Network conducted a random drug test and discovered that their satisfactory worker was using pot instead of highly addictive and damaging painkillers, they fired him. Keep in mind that at the time of his firing in 2010, medicinal marijuana was already legal in Colorado. But that didn't matter.

Federal law trumps state law, and in this case, a man lost his job because federal lawmakers are cowards who would rather take money from entities that have a huge financial incentive in prohibition. Alcohol companies, pharmaceutical companies, big tobacco, correctional officers, cops, private prisons, and the DEA have all hindered any progress in federal legalization. The majority of people in prison are non-violent drug offenders. If we can't criminalize them, how will all these entities make money? Countless lives have been destroyed as a result of all this madness.

Coats had two choices to ease the physical pain caused by his tragic accident. He could have done what many Americans do, and use federally legal and addictive prescription painkillers. But he decided on the second option of marijuana, which isn't chemically addictive or lethal with excessive use.

I find it interesting that in the midst of a huge opioid addiction epidemic in the U.S., the federal government maintains that weed is the real enemy of the state. In fact, The Centers for Disease Control and Prevention report that more Americans now die from painkillers than from heroin and cocaine combined. To further elaborate, deaths from prescription painkiller overdoses among women have increased more than 400% since 1999, compared to 265% among men.

If Coats had taken these same destructive prescription drugs, he would have still been employed today, and that's because pharmaceutical companies have more representation in government than the average American. Sure, Coats would have run the risk of a crippling addiction, or even death, but that's the risk our lawmakers want him to take.

I understand the Colorado Supreme Court's reasoning, but I don't agree with it. Countless people die every year from garbage that federal lawmakers have deemed legal, but marijuana is a problem? Tell that to the friends and family members of the 16,000 people who die every year from prescription painkillers alone.