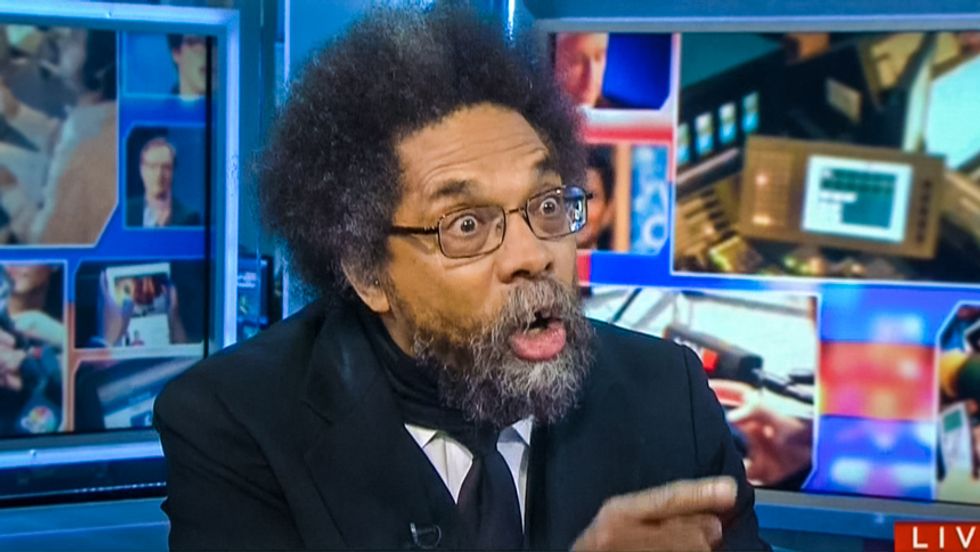 Author and activist Cornel West over the weekend praised President Barack Obama for addressing white supremacy, saying it was a "matter of national security."

Last week, the president responded to the massacre of nine members of a black church in Charleston at the hands of a white supremacist by telling podcaster Marc Maron that the country had not been "cured" of racism just because people were too polite to use the N-word in public.

"Societies don’t overnight completely erase everything that happened 200 or 300 years prior," Obama explained.

On Friday, the president delivered a powerful eulogy for slain pastor Clementa Pinckney, noting that the Confederate flag flying over the South Carolina statehouse grounds had been more than a token of Southern heritage, it had been a symbol of slavery and racial oppression.

"What does it mean to keep people afraid and scare and intimidated, to keep black people thinking we are less intelligent, less beautiful?" West pointed out to CNN host Brian Stelter on Sunday. "And of course in that, to make sure our minds still have slave mentality... When we understand that the legacy of white supremacy is a matter of national security, it's a matter of truth -- and the condition of truth is to allow suffering to speak -- and it's a matter of justice."

"Racism is, of couse, the one thing that can do what? Bring the curtain down on America," he continued, adding that Obama "should have been talking about it for seven years. I'm glad the president now is beginning to speak about it much more consistently."

West argued that the president had taken a softer tone on racism earlier in his presidency because "he's afraid of Fox News, he's afraid of [the] right wing."

"They're going to attack you anyway, Mr. President. Stand for truth, stand for justce," he advised.

According to West, media outlets that had bleeped out the N-word when the president said it during his recent remarks to Marc Maron were contributing to the denial of white supremacy. But he hoped that attention to Obama's comments could increase awareness of endemic racism.

"Obama, of course, being a brilliant and charismatic black president in neo-liberal mode and the fact that you've got a social movement on the ground," he observed. "You've got courageous and visionary, marvelously militant young black, brown, red young people. Ferguson, Staten Island and so forth. It's in the context of an emerging social movement, and then you get a black president saying it, you are going to get a lot of attention."

"It's about how does it get us to come to the truth about America?" West asked. "Founded on white supremacy, indigenous people's land taken, their babies and women violated, enslaved Africans for over 80 years under the U.S. Constitution, unbelievable terrorism and torture."

"And yet out of that, what have black folk done? We've taught the world, in the face of hate, how better to love."

Watch the video below from CNN's Reliable Sources, broadcast June 28, 2015.