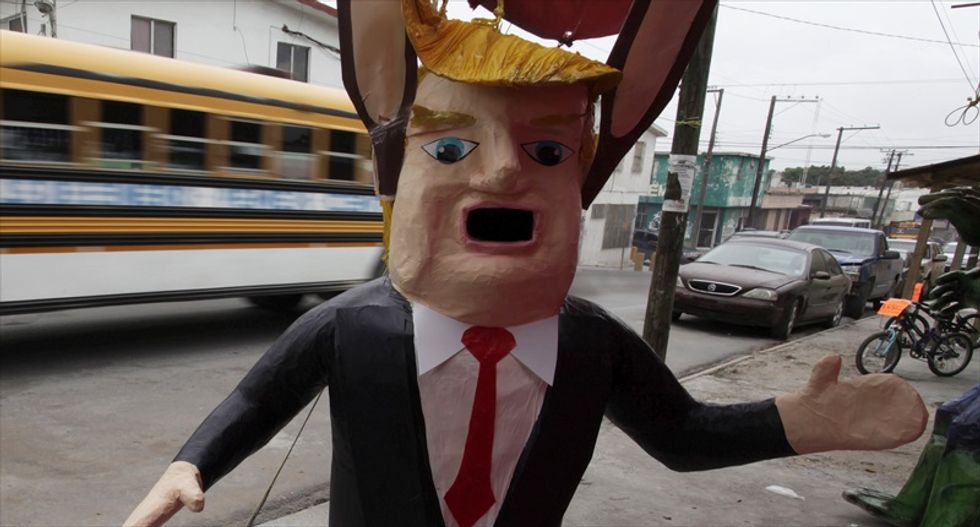 Few presidents of Mexico have managed to unite the country in the way Donald Trump did after he launched his U.S. presidential bid last week with a string of broadsides against America's southern neighbor.

"Imbecile", "racist", "absurd" and "ignorant" were some of the less vulgar words used by prominent Mexicans about Trump after the flamboyant real estate magnate described migrants from Mexico to the United States as drug-runners and rapists.

Trump's provocative comments, including a pledge to build a "great wall" on the U.S. southern border paid for by Mexico, were the latest in a series of swipes against a country where he has become more famous for controversies than boardroom success.

Mexicans rich and poor, cabinet ministers and staunch critics of the government alike trained their fire on Trump. On Thursday, the outrage prompted U.S. Spanish-language television network Univision to drop the Miss USA pageant that the Republican hopeful co-owns.

"If you look up imbecile in the dictionary, you'll see it's a synonym of Trump," Joaquin Lopez-Doriga, news anchor of key Univision shareholder Televisa and one of Mexico's most influential journalists, told his viewers on June 17, a day after Trump announced his White House bid in New York.

On Thursday, Trump said he has great respect for Mexico and loves Mexicans. He defended his more divisive remarks on the grounds that he was worried about border security, jobs in the United States and trade arrangements.

With millions of Mexicans struggling to climb the social ladder in the United States, and many more living in poverty in a Latin American nation steeped in U.S. culture, Trump's brash tirade has fed a stereotype of the rich, overbearing American.

"He's just a millionaire with nothing to do," said Vico Almaguer, a 37-year-old TV advertising producer in Mexico City.

One newspaper cartoon mocked Trump by twisting his famous hair into the shape of a Nazi swastika, while Fher Olvera, singer of popular Mexican rock band Mana, likened him to the leader of the Third Reich during a concert last week.

"I haven't heard a speech so violent and so filled with hate since Hitler," Olvera told a crowd in Los Angeles.

Last week, Trump said on Twitter: "I like Mexico and love the spirit of the Mexican people."

That was not enough to placate former Mexican President Felipe Calderon, who fired back with one word: "Hypocrite."

Not everyone has attacked Trump. Ximena Navarrete, Mexico's 2010 winner of the Trump-backed Miss Universe pageant, stood up for the 69-year-old, saying he had been "really kind" to her.

The son of a Scottish immigrant mother, Trump had raised Mexican hackles in February with a series of tweets following filmmaker Alejandro Gonzalez Inarritu's best director triumph at the Oscars, the second Mexican to win in a row.

"Oscars were a great night for Mexico & why not - they are ripping off the U.S. more than almost any other nation," Trump tweeted. He then complained about Mexico's patchy justice system, before adding "Don't do business with Mexico!"

Business has proved a test for Trump in the country.

In 2009, Trump was sued by dozens of prospective investors over a failed luxury resort that he had lent his name to, on the Baja California peninsula, according to media reports. The suit was settled four years later, the reports said.

In 2007, Mexican media reported that Trump planned to invest in a resort on the Caribbean island of Cozumel, but it never happened, a spokeswoman for the state of Quintana Roo said.

Trump's most recent media foray has provided at least one Mexican with his own business opportunity: pinatas cast in the American's image.

Sporting a flange of blonde hair and a big mouth, the Trump pinatas - containers traditionally filled with sweets that are battered open at parties - were proving a hit, said their maker, Dalton Ramirez.

"This pinata especially is the one everyone wants to break," he said in the northern border city of Reynosa.