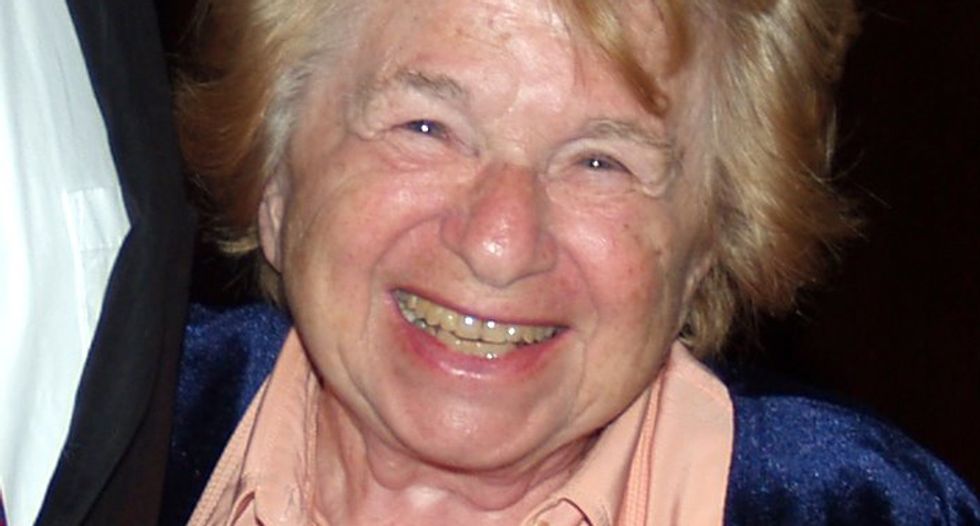 Back from traveling and I'm seeing that there's a brouhaha over Dr. Ruth engaging in a little bit of old-fashioned rape apology, even though she denies that she is rape apologizing. It is worth noting that no rape apologist in the history of rape apologies has ever admitted to rape apologizing, and that includes the rape apologist who has openly and with no small amount of self-interest called for the legalization of rape. So that's some important context. Anyway, she was on Diane Rehm and said this:

I am very worried about college campuses saying that a woman and a man—or two men or two women, but I talk right now about women and men—can be in bed together, Diane, and at one time, naked, and at one time he or she, most of the time they think she, can say “I changed my mind.”

No such thing is possible. In the Talmud, in the Jewish tradition, it says when that part of the male anatomy is aroused and there’s an erection, the brain flies out of that and we have to take that very seriously, so I don’t agree with that.

In response to the inevitable anger at her ridiculous claim that a woman is obliged to put any erection in her presence in her vagina, Dr. Ruth pulled the whole I'm-against-rape-but-really-it's-the-victim's-fault dance:

But let's be clear: Her stance that a man is in the wrong if he rapes you is a clear and obvious backpedal. She said she is "very worried" that people are declaring this right to change their mind after taking off their clothes, saying that "I don’t agree with that". Which is to say, she said she does not agree that you have a right to say no after a certain amount of clothes come off. Which is to say she disagreed, openly, with the law saying that no means no, saying no should mean yes if your clothes are off. Or even if there's just an erection in the room, apparently, which is a particularly scary demand put on women, since men can get erect even without a woman knowing or engaging him at all. Since that's what she actually said, this can't be read as a clarification, but a backpedal. But let's be very, very clear: Dr. Ruth was arguing that it's wrong to prosecute men who rape under certain circumstances, because, by her measure, you should get a rape freebie in those circumstances.  Perhaps she has modified that belief a bit, but if so, it would be nice if she said she was wrong.

But even with her modified stance, there's a serious issue here, which is that she's saying that victims should have a reasonable expectation of being raped if they do some stuff with a man but then elect, in the moment, not to do other stuff with him. And therefore it's their fault if they get raped, even if the ultimate legal responsibility is on the rapist. Anna Merlan is amused at the outrage, saying, "Once again: Dr. Ruth was born 87 years ago," and "Dr. Ruth is not the boss of you, and right though she may be on the joys of spanking, if someone asks you to stop having sex with them, you should do so."

Look, I get it. The endless outrage-fest of the internet is exhausting. I am exhausted by it! I am totally one of the cool kids who is tired of the outrage and will continue to be so until the cool kids enjoy outrage again, at which point I expect I will also join along, being completely and unabashedly and self-interestedly desirous of being with-it.

That said, Dr. Ruth holds herself out as a sex educator. She is not just any 87-year-old. And so yes, while we cool kids totally know that she is not the boss of us, if you are an educator, then you do have authority and it's totally possible that people, believing you are the authority you are held out as, might listen to you and take your advice into advisement.

And what Dr. Ruth is saying here is troubling not just because she excused sexual violence and portrayed men as mindless beasts who can't control themselves. It's also because she, a supposed sex educator, promoted the idea that there is a standard way to Do Sex: A little kissing, a bit of foreplay, clothes off, intercourse, done. There is nothing wrong with having sex that way, of course, but it's a really piss-poor idea to argue that this is the only way to have sex, so much so that a man gets a free pass to rape you if you suggest changing the script in any way.

There are lots of reasons you might be naked and sexual with someone without it automatically meaning that you want to have intercourse! For one thing, you might not have both a penis and a vagina in the room, meaning penis-in-vagina intercourse is automatically off the menu. But for us standard issue straight people, it really is pretty common to negotiate, sexily---always sexily (I swear,for you weirdoes who always insist talking during sex is somehow a boner-killer)---for having some kind of sex that ain't the intercourse kind.  People frequently take their clothes off and say, hey, let's just do oral or just rub each other a little, but not go for the intercourse. For a million reasons: She's on her period, they don't have a condom, they just don't feel like it, they want to save it for a later date. Teenagers are the masters of "everything but". But non-virgin adults do it all the time, too, for a variety of reasons. This isn't high level stuff, but an ordinary, everyday part of the adult sexual experience. Men are perfectly fine with this in the vast majority of cases. If you learned about sex from porn, you'd think no one ejaculated in a vagina ever and you'd wonder how our species even reproduces. Needless to say, I think the ubiquity of porn has disabused men of the notion that they're somehow cheated if they don't get to ejaculate on your cervix specifically.

Setting the rape thing aside for a minute, we should be---in a non-outraged, cool kid way, of course---critical of anyone who holds themselves out as a sex educator, regardless of age, who doesn't understand something as basic as this. And doubly so when commenting on college age kids. Conservatives and not a few aging liberals are in a snit over the "hook up culture", but this ability to understand flexibility and consent is actually one of the best aspects of it. Young people---by which I mean anyone under 45, because god knows many in my generation talks this way, too---don't necessarily mean intercourse when they say they hooked up with someone. They mean they got with someone and did sexual stuff. It could be anything sexual, from just petting to anal. Young people are getting away some from the idea that there's a standard way to have sex. You can't be a sex educator if you can't  handle something that basic.