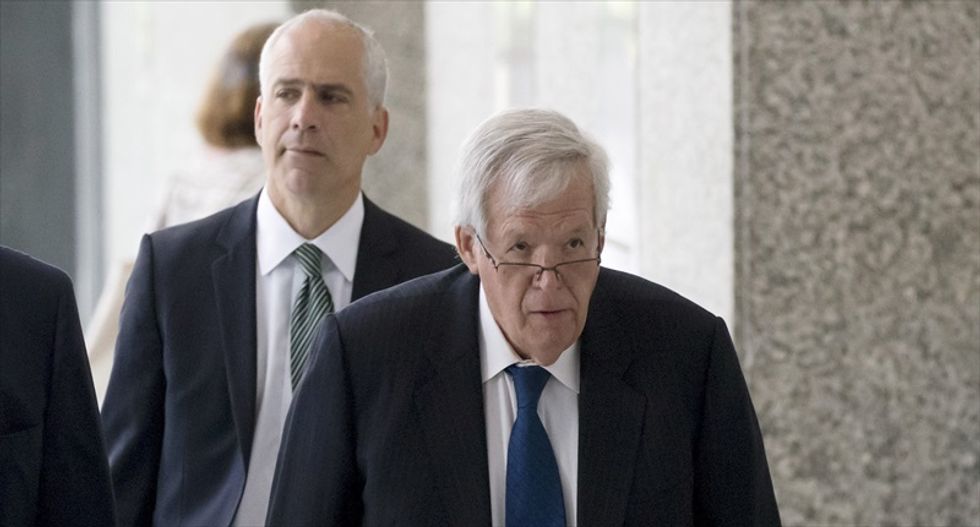 Former U.S. House of Representatives Speaker Dennis Hastert pleaded not guilty in a packed Chicago courtroom on Tuesday to federal charges of trying to hide large cash transactions and lying to the FBI about it.

Law enforcement officials have said Hastert was using the money to try to cover up sexual abuse of a male decades ago when the former Republican congressman worked as a high school wrestling coach and teacher, according to media reports.

Hastert's attorneys, Thomas Green and John Gallo, entered the plea on his behalf in a brief arraignment hearing before Judge Thomas Durkin in Chicago's federal courthouse.

Hunched over, with a shock of white hair, and speaking in a whisper, the 73-year-old Hastert, once second in line for the presidency, stood between his two lawyers and said: "Yes, your honor," when Durkin asked him if he understood the conditions of his pre-trial release.

Durkin set a $4,500 appearance bond and ordered him to surrender his passport and remove firearms from his property.

Since he was indicted on May 28, Hastert has not made any public statements about the charges or the allegations that the payments amounted to hush money.

Dozens of television cameras and reporters jostled Hastert and his team of lawyers as he entered and left the building. Neither Hastert nor his attorneys stopped to answer questions.

According to the indictment, Hastert was trying to evade detection of $3.5 million in payments he had promised to make to someone from his hometown of Yorkville, Illinois, to conceal past misconduct against the person.

Hastert was a high school teacher and wrestling coach at Yorkville High School in the 1960s and 1970s.

Hastert had not been seen in public since the indictment. ABC News filmed Hastert early on Tuesday as he and his wife were driving away from their farm in Wisconsin, stopping at a gas station in their black SUV and arriving at their home in the Illinois town of Plano, about an hour's drive from Chicago.

Hastert led the House for eight years before leaving Congress in 2007. He was the longest-serving Republican speaker.

After the indictment, Hastert resigned from the Dickstein Shapiro lobbying firm in Washington and from the boards of exchange operator CME Group Inc and REX American Resources.

His alma mater, Wheaton College in suburban Chicago, removed his name from a policy center.

He hired Green, a prominent white-color criminal defense attorney from Washington, to represent him.

According to the indictment, Hastert withdrew $1.7 million in cash from his bank accounts from 2010 to 2014. He is charged with "structuring" $952,000 of those withdrawals, taking the funds out in increments of under $10,000 to evade the requirement that banks report large cash transactions.

Hastert then told the FBI he was keeping the cash for himself, which the indictment said was a false statement.

The person receiving the payments has yet to be identified. But the identity of another alleged victim has emerged. The sister of a former student at Yorkville High School told ABC News on Friday Hastert had sexually abused her brother, who is now dead.

It was not clear whether Durkin will continue to preside over the case. Durkin said he did not have close ties to the parties, a financial interest or conflict, but made campaign contributions to Hastert years ago through a partner in the law firm where Durkin worked. He has offered to disqualify himself.

Prosecutors and Hastert's attorneys have until Thursday to decide whether they will waive the disqualification, he said.

Afterward, the case will be transferred to another judge, or Durkin will establish a pre-trial calendar with lawyers.