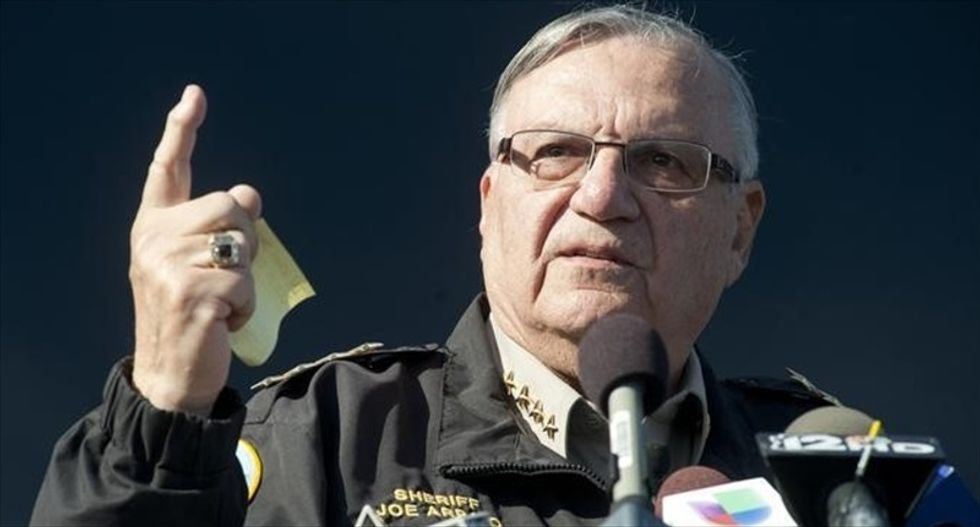 In a written ruling, U.S. District Judge Roslyn Silver let stand the findings of another federal judge in a separate 2007 lawsuit filed by civil rights groups. The judge in that case ruled Arpaio's deputies racially profiled Latino drivers and unlawfully detained them.

Silver said she would not allow the parties to relitigate the allegations involving the "discriminatory traffic stop claims" in granting the request for summary judgment made by Justice Department attorneys.

The Justice Department filed its suit in May 2012 alleging that the Maricopa County Sheriff's Office, run by Arpaio, intentionally engaged in racial profiling and unlawful arrest of Latinos, violating their constitutional rights.

It also accused the office of routinely violating the rights of political opponents by targeting them with unsubstantiated complaints and lawsuits, including arresting them.

Those latter claims will be the focus of a trial set to begin before Silver on Aug. 10 in federal court in Phoenix.

Arpaio, who bills himself as "America’s Toughest Sheriff," denies the allegations and pledged to fight "to the bitter end" when the Justice Department's lawsuit was filed.

An Arpaio spokeswoman declined comment on Monday's ruling, and his attorney could not immediately be reached.

The decision is the latest legal setback for the 83-year-old lawman, who is fighting civil contempt proceedings by another federal judge as part of the separate 2007 racial profiling case, which was filed by civil rights groups on behalf of Latino drivers.

Frustrated by violations of his court orders in that case, Judge Murray Snow held contempt hearings in April against Arpaio and four others in the case.

But further proceedings were put on hold after lawyers for Arpaio and an aide asked that Snow be removed after what they called decisions that could be seen as biased.

Trump stuck in 'a pattern of futility' as his old legal tricks are 'running out of road': analysis

A string of legal defeats has complicated Donald Trump's efforts to delay or avoid accountability over his storing of classified materials at Mar-a-Lago, argues CNN reporter Stephen Collinson.

"Taken together, this pattern of futility is reinforcing a principle that cuts to the core of the American legal and political systems – that Trump, even as an ex-president, is not entitled to any more deference under the law than any regular citizen," CNN's analysis stated.

President Joe Biden on Friday slapped down Hitler-praising rapper Kanye West while at the same time taking a subtle shot at former President Donald Trump for hosting him at his Mar-a-Lago resort.

In a post on Twitter, Biden directly addressed the multiple false and offensive statements made by West during his anti-Semitic tirade during his appearance on Alex Jones' InfoWars on Thursday.

Murdoch is "scheduled to face questions from Dominion’s lawyers on Monday in Los Angeles, according to multiple reports, and will be the highest-ranking official at Fox to be deposed by Dominion," The Hill reports.