Fox guest blames massacre on Affirmative Action: 'Liberals created this kid that shot up this church' 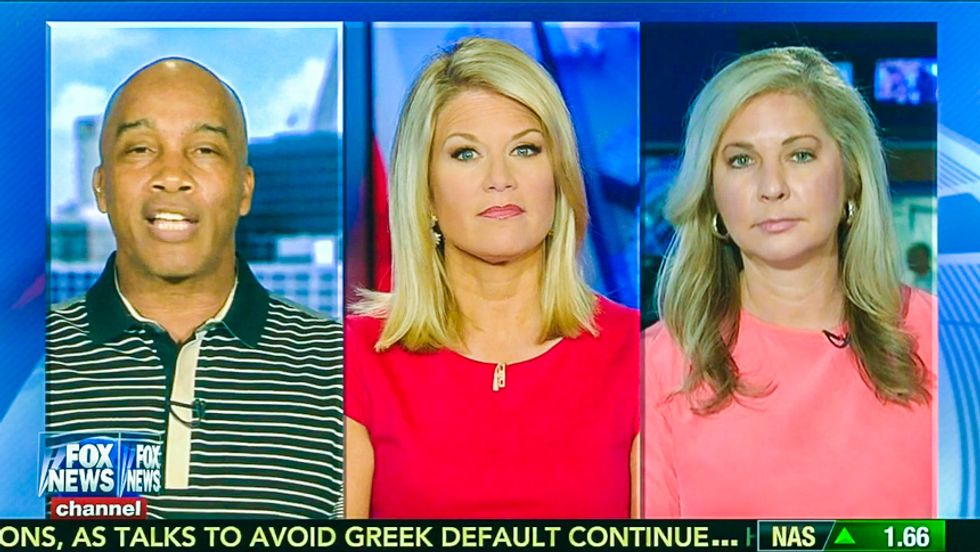 During a discussion about how Southern states were dealing with Confederate symbols following the South Carolina tragedy, Fox News host Martha MacCallum asked the author of Race-Pimping for his thoughts on the effort.

“Well, let’s hope that it eradicates racism, Martha, I mean that’s essentially what the left is after," Jackson said sarcastically. "You know, they never give up anything. This is such a red herring that takes away from the real issue that liberals created this kid that shot up this church."

MacCallum speculated that the "hysteria" over removing the Confederate flag from the South Carolina statehouse grounds "in reality, it does absolutely nothing."

"If you're going to go back in history and start eradicating things, let's start with the Democrats," Jackson argued. "They are the biggest racists on the planet. Their platform was begun with racist intentions."

The Washington Post's Eric Wemple later emailed Jackson and asked him to clarify his remarks blaming liberals for the church massacre.

"He’s a Millennial, i.e. very non-racial according to all data," Jackson said of the admitted killer. "He didn’t grow up in a white-supremacist family. So he’s a product of culture, a culture Liberals own. From the moment he hit school, in his generation, boys are bad. White boys are worse."

According to Jackson, the shooter was forced to take medication "to deal with his Liberal-created psychosis."

"[A]nd policies of the Left won’t let him be called 'insane' and put away from the public. So he FED his psychosis with a healthy dose of Trayvon Martin, Michael Brown, Eric Gardner, and others, until he snapped," Jackson concluded.