Fox host: 'Insane' to correct college gender bias against women just because of a 'biological accident' 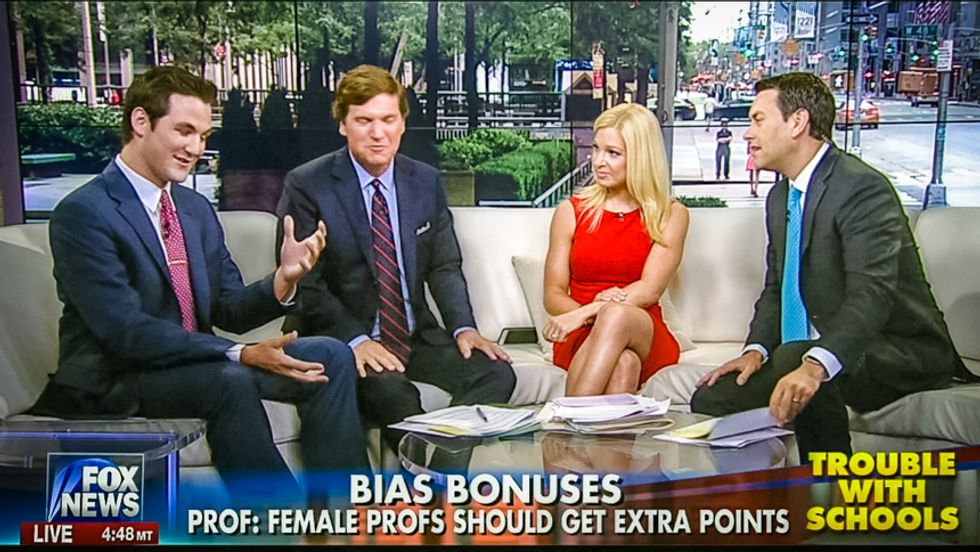 A Fox News host argued over the weekend that a college professor was trying to correct gender bias just because a "biological accident" had made her into a woman.

In a column for The Conversation last week, Cornell University Professor Sara B. Pritchard noted that faculty members suffered from "pervasively slanted by gender bias" in teaching evaluations, and suggested that a temporary solution would be to calculate a "correction" for women professors.

"Female faculty should receive an automatic correction — that is to say, a bonus — on their quantitative teaching evaluation scores," she explained. "The bonus should be determined by average gender bias in teaching evaluations at their institution or national averages."

"So, the idea here is that just being a woman, the result of a biological accident over which you have no control, ought to give you addition points in your evaluation?" Carlson opined.

According to Phillips, there were no "facts" to back up Pritchard's assertion of gender bias.

"The allegations are that students are naturally against professors who are women, whether subconsciously or they know they are doing it or not," Phillips said. "So on end of the year course evaluations, female professors should be given extra added automatic bonus when they are being reviewed because students are apparently biased against women."

Although Pritchard cited a study called “What’s in a Name: Exposing Gender Bias in Student Ratings of Teaching,” Phillips insisted that she was "kind of going off of a few experiences she's had and not actually any facts."

Fox News host Anna Kooiman said that she could understand Pritchard's point of view because "if a woman has her hair all messed up or something" then people judged her as some who "doesn't take care of herself."

"If a man's hair is messed up or a professor, he's just like a mad scientist," Kooiman explained. "So I can sort of see where she's coming from."

Phillips, however, said that he disagreed because his favorite professor was a woman at Liberty University, a conservative Christian school where tight-fitting clothing is deemed unacceptable for female students.