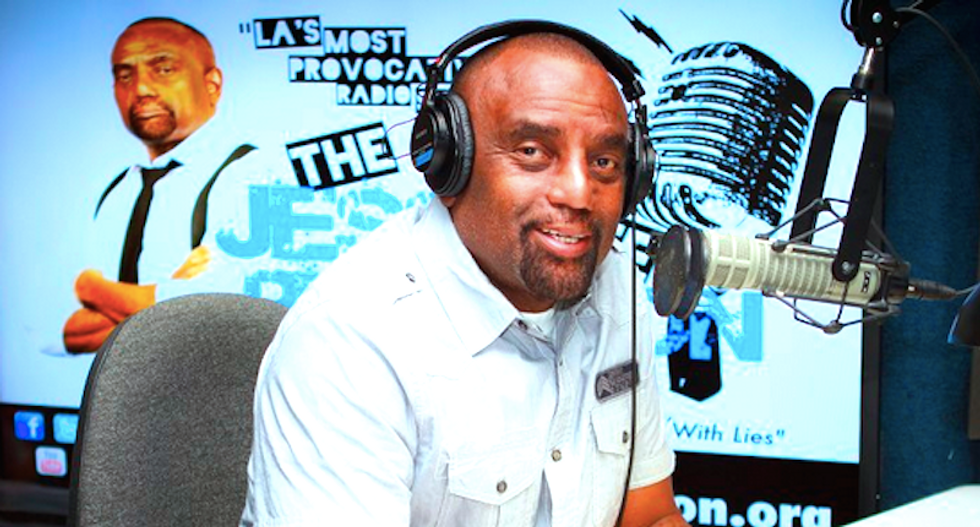 A black conservative warned black Americans that more white terrorists may be encouraged to take up arms against them after the Charleston massacre – if President Barack Obama continues to say racism is an ongoing problem.

The conservative pundit, who recently told Sean Hannity that Baltimore residents had overreacted to the death of Freddie Gray while in police custody, insisted that white racism against blacks no longer existed.

"(Obama) implied that racism is still an issue in America today for black people from white folks, when it's absolutely not true," Peterson said. "You have the Department of Justice and others calling it a hate crime even before they knew -- before the dust settled, they called it a hate crime, which is encouraging or verifying for a lot of angry black people that racism is a problem."

He urged angry white people to start lashing out against black critics by reciting racist tropes.

"They need to speak out to the country, to black Americans, and tell them, 'I am not a racist, I am not your problem -- you need to take care of your own life, you need to get married, raise your own children, get away from the government taking care of you, (and) drop your anger so you can see that I am not your problem,’” said Peterson, summing up a month’s worth of Fox News programming in a matter of seconds.

He said a “lack of moral character,” not racism, was to blame for racial disparities in the U.S. – but he said white Americans were victims of a racist double standard that would eventually lead to even more violence against blacks.

“White people are feeling fear,” Peterson said. “If they should speak up, they’re called racists, and they are feeling guilt because they feel a sense of responsibility for what’s going on when they really have nothing to do with it

“They have all this anger that’s starting to build up inside of them, and I am very concerned,” Peterson continued. “I’ve been concerned for a long time that if they don’t open up and express themselves and say, ‘No,’ when they’re called racists, we’re going to see more killing. I want to be wrong, but we are going to see – especially young white men and women – we’re going to see more of them carrying out acts like the one we just saw in South Carolina.”