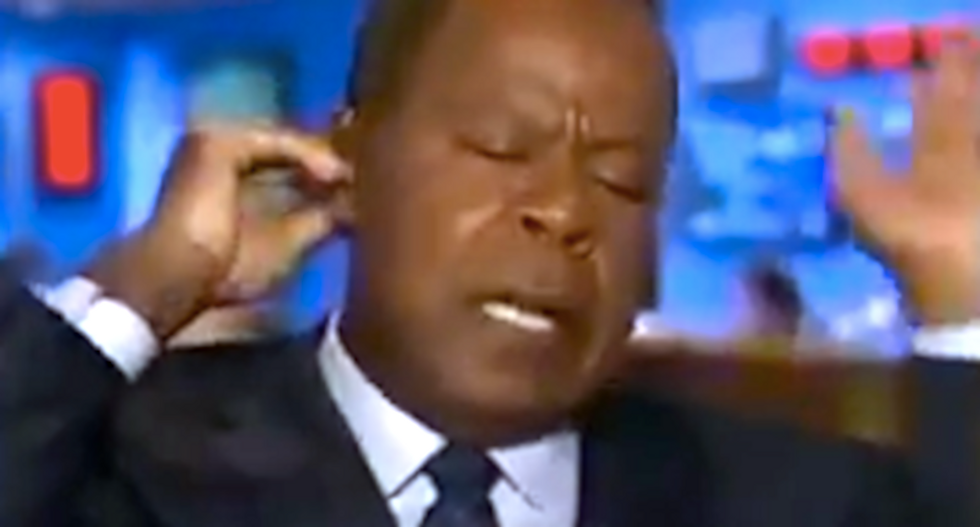 A guest on Sean Hannity’s Fox News program walked out of the studio Thursday night to protest the bizarre arguments of another guest about the fatal shooting of a black man by a South Carolina police officer.

“Americans have overreacted,” Peterson said, as fellow guest Leo Terrell loudly protested. “What I’m saying here is that we’ve got to stop overreacting.”

“We should wait for due process, because I don’t think Americans understand how angry and brainwashed these young black folks are,” Peterson said, and Terrell mutters “oh, God,” as the conservative guest paused.

“You better come to me or I’m gone,” Terrell said. “I’m not going to sit here and listen to this hate. It’s my turn.”

“Leo, you’re killing me,” Hannity said in exasperation. “No, it’s my turn, and then I’ll go to you. I want to ask you a legal question. I think what Jesse is discussing is a topic for another day – but not in this case. In this case, the justifiable legal use of force is clear. (Scott) is not a threat to anybody. I think it’s irrelevant what happened leading up to this, based on the video.”

Terrell gave Hannity “kudos” for his viewpoint on the shooting, which resulted in first-degree murder charges for Officer Michael Slager.

“You and I are in agreement for the second time in the history of Fox News cable,” Terrell said. “It is against the law for any officer to shoot an unarmed black man or any man in the back.”

Peterson tried to interject, and Terrell told him to “quiet down” before standing up, taking off his earpiece and microphone, and walking out of the studio where he was recording his TV appearance.

The conservative pundit begins a lengthy and uninterrupted explanation of his work with families in South Central Los Angeles, where he said gang members were “openly robbing” homes but community members were too afraid to call the police.

“It’s too bad Leo’s a little coward,” Peterson said, “but I want Leo to go into the inner cities with me with cameras, and let’s take pictures of (those) thugs.”