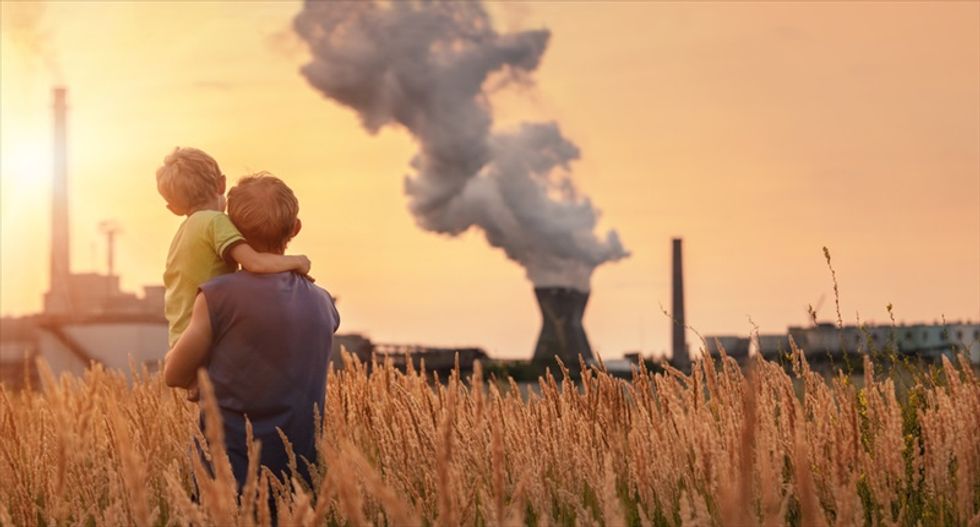 By Damian Carrington and Sarah Boseley, The Guardian

Climate change threatens to undermine half a century of progress in global health, according to a major new report.

But the analysis also concludes that the benefits to health resulting from slashing fossil fuel use are so large that tackling global warming also presents the greatest global opportunity to improve people’s health in the 21st century.

The report was produced by the Lancet/UCL commission on health and climate change, a collaboration of dozens of experts from around the world, and is backed by Margaret Chan, head of the UN World Health Organization.

“We see climate change as a major health issue and that it is often neglected in the policy debates,” said Professor Anthony Costello, director of the UCL Institute of Global Health and co-chair of the commission.

“On our current trajectory, going to 4C [of warming] is somewhere we don’t want to go and that has very serious and potentially catastrophic effects for human health and human survival and could undermine all of the last half-century’s gains. We see that as a medical emergency because the action we ned to do to stop that in its tracks and get us back onto a 2C trajectory or less requires action now – and action in the next ten years – otherwise the game could be over.”

The comprehensive analysis sets out the direct risks to health, including heatwaves, floods and droughts, and indirect -- but no less deadly -- risks, including air pollution, spreading diseases, famines and mental ill-health. A rapid phase-out of coal from the global energy mix is among the commission’s top recommendations, given the millions of premature deaths from air pollution this would prevent.

The report states that political will is now the major barrier to delivering a low-carbon economy and the associated improvements to health and poverty, not finance or technology.

The authors argue that health has been neglected from the climate change debate. It says doctors and other health professionals must take a leading role in ending society’s “addiction” to fossil fuels, having confronted “powerful entrenched interests”, such as the tobacco industry, in the past.

“A public health perspective has the potential to unite all actors behind a common cause — the health and wellbeing of our families, communities, and countries,” the report states. “These concepts are far more tangible and visceral than tonnes of atmospheric CO2, and are understood and prioritised across all populations.”

The commission is seeking consciously to shift the balance from what Costello called “catastrophism” to a far more positive message about the potential for improving human health.

“We are getting fatter, we’re getting heart attacks, strokes, diabetes, respiratory ill-health, depression, anxiety and virtually all of things we want to do to protect us against climate change will improve our health, whether it’s active transport – walking, cycling – eating healthier sustainable local diets or cutting air pollution. All of that will have a huge health dividend, health benefits and save a lot of money,” said Costello.

in December, when nations hope to agree a global deal on cutting emissions. The Intergovernmental Panel on Climate Change warned in November of “severe, widespread, and irreversible impacts” from global warming, shortly after an international group of economists warned that the world’s future economic growth depended on taming climate change.

Last week, Pope Francis issued a rare encyclical which set out a passionately-argued moral case for acting on both climate change and poverty. In May, financial experts at the International Monetary Fund revealed that the full costs of fossil fuels being picked up by taxpayers runs at $10m (£6m) per minute, more than the total spent on healthcare by the world’s governments.

Chan said the latest Lancet/UCL commission report was “very timely”, coming a few months ahead of the Paris conference. The first commission report, which warned that “climate change is the greatest health threat of the 21st century," was published in 2009 ahead of the ultimately unsuccessful UN climate summit in Copenhagen.

Chan highlighted the huge benefits to be gained by tackling air pollution, shown by the new report. “Air pollution is one of the most important health risk factors globally, comparable to tobacco smoking, and the largest killer in some countries,” she said.

Deaths from air pollution are rising around the world. The Lancet report cites research estimating that cutting carbon emissions would cut premature deaths from air pollution by 500,000 a year in 2030, 1.3m in 2050 and 2.2m in 2100, particularly in the heavily polluted cities of India and China. Other work in the US shows the boosts to human health can be worth 10 times the costs of cutting emissions.

The report details the range of damage to health that global warming causes, including heatwaves whose deadly effects are rising around the world, for example in Russia in 2010 where 11,000 people died. Dengue fever is likely to spread, the report finds, and malaria cases may rise in some areas while falling in others. Cholera outbreaks occur when hurricanes mix waste and drinking water and extreme weather is increasing.

Food shortages may increase as climate change harms crops and livestock and the ability to work in hot climates, the report states. Such shortages can lead people to migrate as refugees, leading to further health problems, or even to conflicts. People forced to move, whether by food shortages, floods or extreme storms, can suffer serious mental health problems.

Mohga Kamal-Yann, Oxfam’s senior health policy advisor, said: “Rapid action to tackle global emissions and help communities adapt is crucial to reduce the threats of ill-health, hunger and additional hardship. Rich countries can and should make substantial cuts to their emissions by phasing out coal and by providing the funding that developing countries need to cope with climate change.”

The Guardian’s Keep it in the Ground campaign has been highlighting the impact of climate change on public health by focusing on the world’s two largest health charities – the Bill and Melinda Gates Foundation and the Wellcome Trust. The campaign is asking them to move their investments out of fossil fuel companies.